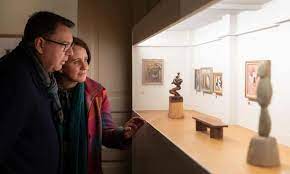 Hambling, who recently made headlines with her controversial sculptural tribute to Mary Wollstonecraft, has contributed a 9cm nude, while Dean has made a 15cm replica of her ghostly blackboard drawing of a ship. A miniature installation by Akomfrah will fill a room of the gallery. It is a photographic triptych, serving as a taster of his full-scale multi-screen film projections.

“At a time when things in our lives were spinning out of control, I was able to move forward with this project just using a ruler in my living room,” said Martin. “It gave artists who were blocked, or struggling with homeschooling, something they had space for. Sometimes, though, the problems of working at a small scale have been as difficult to get around as those that come up with a huge piece of work.”

For Pallant House, the show is more than an exercise in diminished scale, challenging though that has been. The mini gallery also reflects the way artists and architects often have to work with scaled-down models.

“Sculptors are used to making maquettes of their work first, and I have often had to print up small images of paintings to hang in different ways when I am curating a show, so it is strange but also something that we are familiar with,” he said.

Martin was inspired by two other model galleries already held at Pallant House. One was created in 1934 and contains work by Vanessa Bell, Duncan Grant, Henry Moore and Paul Nash. The second, from 2000, was commissioned for the millennium and displays small works from Frank Auerbach, Antony Gormley, Howard Hodgkin, Peter Blake, RB Kitaj and Richard Hamilton. Together with the new gallery they cover 80 years of British art.

“Our ambition was to create a show that would be an easy way for young people to get a picture of contemporary art, although none of the artists have dumbed down at all. They were fascinated by the project and took it very seriously,” said Martin. After it is shown at Chichester, the model gallery will go on tour around Britain.

Martin said it was important to him to have “social and political” elements in the new gallery. It will include a photographic work from the late Khadija Saye’s Crown series. It is the only work from the series not destroyed in the Grenfell Tower fire, which took the young artist’s life.

“We are lucky to have a unique print from Khadija,” said Martin. “She had sent it to a trustee who had helped her to get to Venice and so it escaped destruction.”

Miniature artworks have fascinated artists and audiences down the centuries, with doll’s houses, such as the one in Amsterdam’s Rijksmuseum, drawing big crowds. It also inspired the writer Jesse Burton to write her bestselling novel The Miniaturist, and the author has said she will be visiting the new exhibition this summer.

The original 1934 mini gallery was partly inspired by a doll’s house made for Queen Mary in 1924 and on public display at Windsor Castle. The gallery was put together for charity by art dealer Sydney Burney but its contents went missing for decades. When some of the works were rediscovered by Burney’s grandson inside a suitcase, the model was recreated by Pallant House, using original architect’s drawings.

This first gallery, designed by architect Marshall Sisson, was an early “white cube” space, while in 2000 the model was a smaller version of the gallery’s own new extension.

The new gallery is about 150cm in length, with one side a traditional Queen Anne facade and the other a contemporary glass front. “What we didn’t want was it to be a glass vitrine with all the art lined up inside,” said Martin. “So the detailing has become very important, to the extent that we even have little floorboards that have been laser-cut on the gallery floor.”