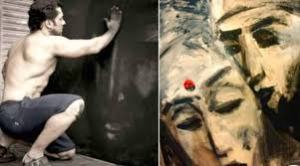 MUMBAI: We’ve all seen Bollywood star Salman Khan Paint portraits at home or on the sets. According to the actor’s latest tweet, his paintings will now go on display at an art exhibition in Bengaluru.

Not just that, his masterpieces will be displayed alongside works of artists like Raja Ravi Varma, Abanindranath Tagore, and VS Gaitonde.

Reports state that Salman’s painting named ‘Immortal’, which is said to be based on Mother Teresa will be displayed at the exhibition.

Besides hitting a personal high, the actor is also getting ready to give his fans an action-packed 2021. The star has his film ‘Radhe: Your Most Wanted Bhai’ set for release on Eid. He has also begun work on his cameo in the Shah Rukh Khan starrer ‘Pathan’.

After wrapping up work on his cameo, he revealed early this month that he will begin work on the third part of the ‘Tiger’ franchise with Katrina Kaif as the leading lady and Emraan Hashmi playing the villain.