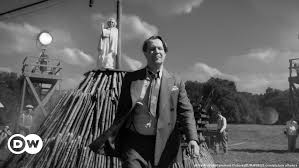 The Academy Award nominees have been announced. Six films have collected six nods, but David Fincher’s “Mank” leads the race with 10.

The Indian actor, singer and film producer Priyanka Chopra Jonas and her husband, the US singer and actor Nick Jonas, have revealed the Oscar nominees through a livestream on Monday.

Following Nomadland‘s winning streak from its premiere at the Venice Film Festival through the Golden Globes at the beginning of March, the film, directed byChloe Zhao and starring Frances McDormand, has obtained six Oscar nominations, including for best picture. Five other films have equally collected six nods: The Father, Minari, Judas and the Black Messiah, Sound of Metal and The Trial of the Chicago 7.

All of those films are in the running for the Academy Awards’ top category, best picture, along with Promising Young Woman.

Along with Zhao and Fincher, the nominees for best director are Lee Isaac Chung (Minari), Emerald Fennell (Promising Young Woman) and Thomas Vinterberg (Another Round).

It is the first time in Oscar history that two women — Zhao and Fennell — have been nominated for best director. Only one female filmmaker, Kathryn Bigelow, has ever won that Oscar.

Germany represented through a coproduction

The Danish director Thomas Vinterberg is also in the run for an Oscar in the best foreign language film category. His film, Another Round, was the big winner at the European Film Awards.

A German coproduction is equally included among the category’s nominees, with Quo Vadis, Aida? by the Bosnian director Jasmila Zbanic.

The other nominated films are Romania’s entry, Collective, by Alexander Nanau; Better Days, by the Hong Kong filmmaker Derek Tsang; and Tunisia’s The Man Who Sold His Skin, directed by Kaouther Ben Hania.

Five years ago, the #OscarsSoWhite hashtag was created in reaction to the lack of diversity among nominees. There has been a manifest change in this year’s selection, as nine of the 20 acting nominees are people of color. Among them is a posthumous nomination for Chadwick Boseman, as best actor in Ma Rainey’s Black Bottom.

The awards ceremony will take place on April 25 — two months later than usual due to the pandemic.