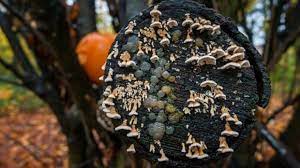 The UK’s woods are full of strange specimens. But they aren’t easy to identify – even for the experts.

host of otherworldly characters are squatting in the wood. Conventional toadstools make way for more gelatinous bodies slopping around fallen trees, dead wood and tree stumps during the coldest months of the year. Many are wood-decaying fungi – things that look like crusts, skin, slime and bits of brain that use enzymes to break down and digest wood and other dead plant material.

For the past few months I have conducted an out-of-season exploration of this strange and underrated world. The Seek app – made by iNaturalist – identifies species using artificial intelligence (AI). I identified 15 species of fungi (with the help of a fungi identification book at home) and was baffled by many more. As I discovered, fungi do not like being categorised.

Then there are delicate ones that fan out of rotting wood like frills on the hem of a layered dress. These include hairy curtain crust (Stereum hirsutum), crowded parchment (Stereum complicatum) and turkey tail (Trametes versicolor). Some of these species can be spotted all year round but they are particularly visible in winter, when vegetation is bare.

“Most people like to go out in autumn because they like to see the fleshy toadstool things, but most of my work is on wood-decay fungi,” says Lynne Boddy, professor of microbial ecology at Cardiff University. “To me, this is a good time of year – there is masses out there to be seen. I just went for a walk with my six-year-old granddaughter this morning, and we must have seen 10 different species, and we were just making a very quick charge through the woods to get to the swings.”

The bit of fungi we see is the fruiting body, and it is part of a much larger structure laced through the soil, plants and trees. Unlike animals, fungi put their bodies in the food they eat, so they are invisible to us most of the time. Fungi produce fruiting bodies throughout the year – so even during the quiet, leafless months of winter, there are always some species to see.

Fungi challenge our traditional taxonomic system because their world is about processes and relationships, where one species can be almost indistinguishable from another. They can also look very different depending on the day. For example, hairy curtain crust sometimes seems to morph into turkey tail, which explains its other name, false turkey tail. But then there is another false turkey tail, called golden curtain crust (Stereum ostrea), which is slightly different.

It can all be a bit of a headache, and in the past few years fungal taxonomy has got even more complicated because molecular DNA has shown that many species thought to be the same are not. Mycologists believe chicken of the woods – a type of shelf fungus – might be different species on oak and yew trees, even though they look identical. There is much disagreement about yellow brain fungi and witches’ butter – some arguing they are the same, others say they are different.

Their tendency to trick means fungi can be a hard group to get into. Plantlife’s Dave Lamacraft, who previously worked with the RSPB, says: “In [the bird] world, you can say, ‘oh, it’s a robin’, ‘oh, it’s a song thrush’ – there’s very little doubt. In the fungi world suddenly you don’t know if what you’re calling something is what it is.”

“Once you get into ID, it’s really hard; it’s hard to avoid having to use microscopes if you want to know for sure,” adds Lamacraft. His advice is not to worry too much about identification when starting out. He recommends just looking at fungi and working out what is special and different about them.

“You’re transported into a whole other world – it’s like Gulliver’s travels through a hand lens,” he says.

Just learning the name of something does not necessarily give you knowledge about a fungus, agrees Boddy. She encourages people to look for mycelium – the hidden network of tiny filaments – when going on fungi walks. These threads can be excavated by gently turning over rotting wood and pulling apart soil.

“You can trace them for quite a long way. Some of them are quite fine, but other ones are really big, thick and juicy, and you can follow them for many metres. So that’s an exciting thing to do,” she says. “I don’t want to take away from the importance of fruit bodies, but it’s equally important that we find out what they’re doing, because they are the things that are keeping our ecosystems going.”

Nine out of 10 plants have fungi associated with their roots, and although people understand the importance of plants in terrestrial ecosystems, they rarely appreciate the work of fungi. Despite recent interest in fungi since the publication of the biologist Merlin Sheldrake’s book Entangled Life, taxonomic work on fungi is at its lowest point since the 1930s in the UK, according to written evidence submitted to a House of Lords select committee in 2008.

A lot of data collected by the British Mycological Society is from amateurs who contribute to a range of research and provides information for Red List conservation assessments. A five-year citizen science fungi conservation project run by Kew Gardens, which started in 2014, resulted in the discovery of species that had not been seen for up to 100 years.

“We need these records, we need these amateurs to be identifiers,” says Boddy, who adds that joining a local fungi group is the best way to learn. While in lockdown, however, posting images on the British Mycological Society’s Facebook page could be a good substitute. “People are very happy to help,” she says.

The more people use iNaturalist – which is created by the California Academy of Sciences and the National Geographic Society – the better the AI will become at identification, and the more this data will be useful to scientists. Already more than 23m observations have been made.

From never really noticing fungi I am now seeing them everywhere. New characters refresh old walks, and it’s nice to know these observations could be useful to someone somewhere.