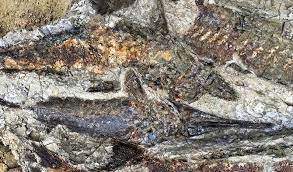 The President of New Valley University Abdel Aziz Tantawi said in a statement that a research team at the university’s Vertebrate Paleontology Center uncovered the first fossil discovery in the ancient Tethys Sea in the Dakhla Oasis in the New Valley governorate, southwest of Cairo.

The research team discovered the remains of an extinct giant fish, a sawfish beak, and a sawfish rostrum, in addition to large parts of a sea turtle and other parts of a large marine reptile, dating back more than 70 million years. The team also discovered some shark teeth.

Egypt’s Western Desert is one of the world’s most valuable natural treasures, unveiling the secrets of ancient life.

Tantawi said that the university will continue searching for excavations of old human settlements in the New Valley desert, which will be displayed in a natural history museum in the governorate.

Gebely Abuelkheir, professor of geology at the university, said that the discovery location was studied extensively with several scientific and exploratory trips in the Dakhla Oasis.

The team carried out excavations and assessed the ancient environments in which the ancient animals lived. They also studied the level of conservation and determined the extent of the success of the scientific team’s extractions.

Abuelkheir added that the important scientific discoveries in this region reflect the conditions and nature of ancient life on the African continent within the ancient Tethys Sea.

These discoveries are part of New Valley University’s research plan to study the ancient life of the Cretaceous period, which is still mostly unknown on the African continent.

The New Valley desert is one of the most important regions in Africa, it contains a large variety of ancient treasures from the Cretaceous period, especially the marine life that lived in the Tethys Sea.

Mohammed Kamel, a geophysicist at the department of geology at New Valley University and one of the members of the research team, confirmed that among the scientific discoveries was a sawfish beak, with a length of nearly 2 meters, confirming the enormity of marine life in that region.

He added that the marine turtle bones were the largest of their kind ever discovered in Africa, but that similar discoveries were previously made by the university’s Vertebrate Paleontology Center.