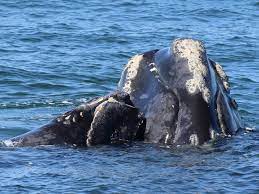 North Atlantic right whales gave birth over the winter in greater numbers than scientists have seen since 2015, an encouraging sign for researchers who became alarmed three years ago when the critically endangered species produced no known offspring at all.

Survey teams spotted 17 newborn calves swimming with their mothers between Florida and North Carolina from December through March. One calf died after being hit a boat, a reminder of a death rate experts fear is outpacing births.

The calf-count equals the combined total for the previous three years. In a dismal 2018, scientists saw no births for the first time in three decades. Still, researchers say greater numbers are needed. The population of the endangered marine giants is estimated to have fallen to about 360.

“What we are seeing is what we hope will be the beginning of an upward climb in calving that’s going to continue for the next few years,” said Clay George, who oversees right whale surveys for the Georgia state government. “They need to be producing about two dozen calves per year for the population to stabilize and continue to grow.”

Right whales migrate each winter to waters off the south-eastern US. Spotters fly over the coastline during calving season, scanning the water for mothers with newborns.

Flights over Georgia and Florida ended on Wednesday, the last day of March, typically the season’s end. Spotters will monitor waters off the Carolinas through 15 April, hoping to pick up overlooked newborns as the whales head north.

This season’s calf count matches 17 births recorded in 2015. The record is 39, confirmed in 2009. Scientists suspect a calving slump may have been caused by a shortage of zooplankton in the Gulf of Maine and the Bay of Fundy. They say the increase in births could be a result of whales being healthier after shifting to waters with more abundant food sources.

“It’s a somewhat hopeful sign that they are starting to adjust to this new regime where females are in good enough condition to give birth,” said Philip Hamilton, a researcher at the New England Aquarium in Boston.

Regardless, conservationists worry that right whales are dying, largely from manmade causes, at a faster rate than they can reproduce. Since 2017, scientists have confirmed 34 right whale deaths in US and Canadian waters, with the leading causes being entanglement in fishing gear and collisions with boats and ships.

Considering whales were documented in the same period with serious injuries, researchers fear the real death toll could be at least 49. Thirty nine births have been recorded since 2017.

“If we reduced or eliminated the human-caused death rate, their birth rate would be fine,” Hamilton said. “The onus should not be on them to reproduce at a rate that can sustain the rate at which we kill them. The onus should be in us to stop killing.”

The US federal government is expected to finalize new rules aimed at decreasing the number of right whales tangled up in fishing gear used to catch lobster and crabs. Proposals to reduce vertical fishing lines and modify seasonal restricted areas have met with heated debate. Fishermen say the rules could put them out of businesses. Conservation groups insist they aren’t strict enough.

The National Marine Fisheries Service received more than 170,000 public comments on the proposed rules after a report was issued on 31 December, said agency spokeswoman Allison Garrett. She said final rules should be published this summer.

Garrett said the fisheries service is also considering adjustments to federal rules that since 2008 have imposed speed limits on larger vessels in certain Atlantic waters during periods when right whales are frequently seen. A report in January found mariners’ compliance with the speed rules had improved but still lagged below 25% for large commercial vessels at four ports in the south-east.

“We’ve long known from the survival estimates that more right whales are dying than those we see,” said George, the whale survey coordinator for Georgia. “They need to be producing a lot more calves. But the big issue is we’ve got to significantly reduce the number than are being entangled in fishing ropes and struck by boats.”