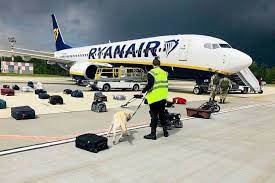 DUBAI (Agencies): FlyDubai, the only airline to operate direct flights from the Arabian Gulf to Belarus, said its services are continuing after a Ryanair plane was forced to land in Minsk causing a diplomatic row with the European Union.

“Flydubai flies three times a week to Minsk and the service is operating to schedule,” a flydubai spokesperson said in response to questions from Arab News. “We continue to monitor the situation.”

Gulf airlines, including Emirates, Etihad and Qatar Airways offer flights to Minsk via other destinations, such as Istanbul.

Belarus provoked the EU’s outrage when Belarusian flight controllers on Sunday told the crew of a Ryanair jet flying from Greece to Lithuania there was a bomb threat and instructed it to land in the Belarusian capital, Minsk, where 26-year-old journalist Raman Pratasevich was arrested along with his Russian girlfriend.

The EU responded by barring Belarusian carriers from its airspace and airports and advising European airlines to skirt Belarus. The bloc’s foreign ministers agreed Thursday to ramp up sanctions to target the country’s lucrative potash industry and other sectors of the Belarusian economy that are the main cash-earners for the government.

Ukraine will ban Belarus-registered planes from using its airspace from May 29, the infrastructure ministry said on Friday.

The RBC news outlet reported late on Thursday that Russia would allow European flights to arrive and depart via routes that bypass Belarusian airspace despite Moscow previously denying access to two carriers that skirted Belarus en route to Moscow.

Russia on Thursday withheld clearance for an Austrian Airlines Vienna-Moscow flight plan avoiding Belarus — a day after failing to approve a revised Air France Paris-Moscow route. Both flights were canceled.

Belarusian President Alexander Lukashenko is set to meet with Russia’s Vladimir Putin at his Black Sea residence in Sochi today for talks on closer economic ties, according to the Kremlin. He said Friday before departing to Moscow that he hopes to reach an agreement with Putin on restoring the air link between Russia and Belarus that has been suspended because of the coronavirus pandemic.