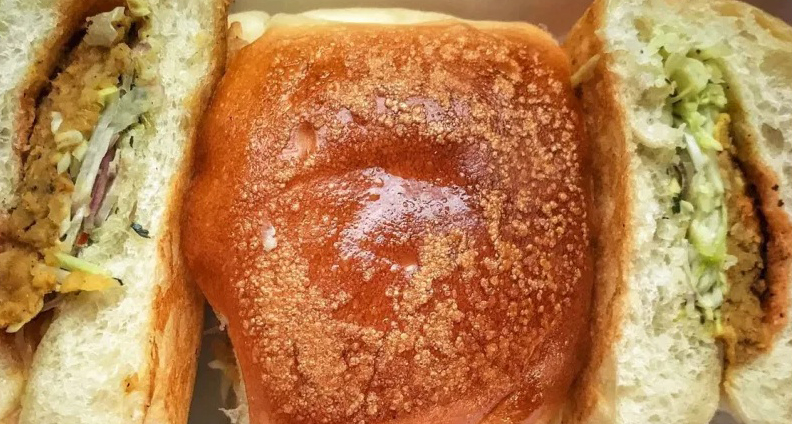 Every morning before sunrise in Karachi, Pakistan, while the city is largely asleep, Abdul Ameen ducks through a tunnel and crosses dilapidated railway tracks to the more affluent side of town. Here, parked strategically between a mosque and a marketplace, his pushcart awaits him.

An incandescent bulb illuminates him as he stacks shami kebab (ground beef-and-lentil patties) brought from home in columns behind glass panes. Next, he forms cascading towers of onion rings, lettuce and thickly sliced tomatoes. Working with almost flamboyant grace, it’s evident his routine has been perfected over the past 30 years.

By the time the first call to prayer, Fajr, is made (traditionally, when there’s enough daylight to distinguish between white and black thread), he’s already dipping into his 16kg canola oil dabba (a rectangular tin bucket) and warming up his giant cast-iron griddle. Over the next few hours, a donkey cart owner, sleepy office workers, domestic helpers and an armed entourage of personal guards all stop by Ameen Burgers to purchase their greasy bounty wrapped in brown paper.

But despite the name of his stall, Ameen is not selling burgers.

Bun-kebabs, widely considered the most beloved Pakistani street food, are thin shami kebab or potato patties in fluffy, milky buns with tangy chutney and crisp vegetables. Optional fried eggs add an extra protein hit. The combination of explosive South Asian flavours, chutney-drenched buns and vegetarian options create a starkly different culinary experience from that of a burger. Ubiquitously available at kiosks and small shops or peddled on pushcarts throughout the country, they are generally sold for between 50 and 120 Pakistani rupees (£0.23-£0.55), depending on the neighbourhood.

Some consider them Pakistan’s affordable (and zestier) answer to burgers

Potato bun-kebabs have long been staples at school canteens, and travellers in Pakistan will see women perched on wooden benches feasting on them in crowded shopping plazas. They’re accessible enough to grab for a quick bite, but not so heavy – on the pocket or the stomach – to require serious investment. “You don’t need to book a reservation or plan out your monthly savings to have a really good bun-kebab,” said Riffat Rashid, the food content creator behind Girl Gotta Eat.

For many Pakistanis, bun-kebabs are intertwined with nostalgic family memories, often representing a first experience of eating out or getting takeaway. Osamah Nasir, who founded the Karachi Food Guide in 2013, remembers first eating bun-kebabs during load-shedding (power outages) at his maternal grandmother’s house when he was a child, where nearly a dozen of his cousins spent lazy Sunday afternoons. “In less than 100 Pakistani rupees (£0.46), we’d all be fed,” he said.

Pinpointing a definitive moment in history when bun-kebabs originated is difficult. Some consider them Pakistan’s affordable (and zestier) answer to burgers, especially because of the unique phenomenon of bun-kebab stalls positioned right outside fast-food franchises. Others, like Haji-Adnan, the third-generation owner of an unnamed bun-kebab stall in Burns Road (a food street in Karachi) think they came about in the 1950s. Haji-Adnan believes his grandfather, Haji Abdul Razzak, introduced them as a mess-free, to-go option for bustling workers in the city centre in 1953, before fast food joints started proliferating across Pakistan’s cities.

Today, vendors experiment with their own spins on the iconic bun-kebab – including sliced beetroot and more expensive fillings like hunter beef (a Pakistani version of dried, salted meat similar to corned beef). Some even offer deconstructed versions. But while spiced potato patties or shami kebabs remain favourites of the roadside staple, the patty is not the sole star of the dish.

Mr Burger, Pakistan’s first burger joint, was created in 1980 when McDonald’s and Burger King deemed the nation not ready for burgers. Adamant to maintain a difference from the local bun-kebab, the creators of the newly introduced burgers viewed condiments and vegetables as frills, instead focusing on perfecting the beef patty and using a “secret sauce” instead of chutney. For bun-kebab vendors such as Ameen, though, these “frills” are necessities – forming the essence of the taste at a fraction of the cost. Instead of juicy cuts of meat, the delectable flavour often comes from simple spice-infused combinations such as coriander, cumin and green chilli, mixed into the patty or ground in the tamarind chutney.

It is, proudly, a poor man’s burger.

Bun-kebabs act as universal levellers, even in the polarised opposite sides of town. “Clifton Bridge in Karachi has long served as an infamous symbol of socio-cultural divide,” explained Nasir, referencing a common Urdu saying: “Pull ke us paar, pull ke is paar” (That side of the bridge; this side of the bridge). “The ‘affluent’ side has most high-end eateries. But bun-kebabs? They’re everywhere,” he said.

But in 2019, McDonald’s replicated the beloved “anday-waala burger” (a bun-kebab with egg). Describing it as an “eggcelent fusion of Desi taste”, McDonald’s did attempt to pay tribute to the indigenous roots of the dish, wrapping it in newspaper packaging designed to look like that of bun-kebabs. It was almost as if the trend had come full circle, with the very chain that deemed a nation not ready for burgers changing its menu to cater to local tastes.

For many Pakistanis, bun-kebabs are intertwined with nostalgic family memories

But the “Bun Kabab Meal”, retailing at 250 Pakistani rupees (£1.15) (which is at least three times the price of a roadside anday-waala burger), left some Pakistanis outraged. Others offered two-star ratings, mainly put off by the missing dhaaba (roadside cafe or food stall) experience.

Curious to find out why locals see the anday-waala burger as being unreplicable, I spoke to Qalander Ali, the second-generation owner of Super Nursery Burgers, an established bun-kebab shop in Karachi. Operational since 1977, it sells a whopping 300 to 400 bun-kebabs daily, with locals and travellers flocking here for the perfectly spiced and tangy chutney.

According to Ali, the food resists mass-production because labour-intensive steps (such as shaping the sticky patty by hand, dipping it in whipped egg whites immediately before frying, intentionally “smooshing” the egg yolk for fried eggs, greasing the bun on all sides and even slicing the buns as they don’t always come pre-halved) make preparing bun-kebabs ahead of time tricky.

And even if McDonald’s did manage to distil the taste, the roadside experience is unique and resists standardisation. “When I saw the McDonald’s version of my local favourite, I wasn’t just upset. I was triggered,” said Nasir. “Part of the enduring charm of the bun-kebab is being able to experience it – to smell it – to see the artisan add his little flairs and endlessly customise it,” he explained.

To many, it felt almost dehumanising to see this idiosyncratic form of self-expression reduced to a mass-produced assembly line. It also felt like an infringement on cultural territory. “I get my McFlurries and Happy Meals from you. Don’t do bun-kebabs,” Nasir said.

Rashid felt equally unsettled. “I was like, ‘Ugh, please, no!’,” she said, “I definitely get excited about brands doing weird food combinations. But if you take a popular street food that everyone already does better – and add nothing to it except a higher price tag? That’s not even… interesting.”

The commodification of the beloved staple may have evoked such strong responses because in Pakistan, the terms “burger” and “bun-kebab” aren’t used just for food. They’re identities.

“Burger” is a colloquial term for the urban elite that was conceived and popularised by Pakistan’s “King of Comedy”, Umer Sharif. As consumers of imported food, “burgers” are believed to have values aligned more with the West than their own country, and are viewed as part of a demographic that speaks English well, has foreign exposure and is privileged with access to resources. At times, “burger” is used pejoratively, akin to “spoiled”, or “Mama’s boy”.

But with burgers’ illustrious rise to fame, a homegrown bun-kebab’s identity emerged almost in antithesis. The bun-kebab is what the burger is not: rooted in, not removed from, reality; and owned rather than mocked. As one Pakistani wrote in an article in The Express Tribune, “Dear burgers, I am a bun kebab, and proud of it.”

Dear burgers, I am a bun kebab, and proud of it

However, with time, it seems that the distinction, especially at a linguistic level, is becoming increasingly blurred. As another Pakistani put it, placing a nation’s identity between two slices of bread is a baffling predicament, especially when the terms start being used interchangeably for the food itself. Colloquial slang surrounding the street food fuels the debate. For example, the practice of referring to bun-kebabs – the food – with the tacked on “waala” (Urdu for the one/the one with) implies both familiarity and mystery. “There’s this underlying assumption that you don’t exactly know what goes into the bun-kebab. And that’s the beauty of it,” said Rashid.

A chicken or beef burger is simply “chicken” or “beef”, whereas “anday-waala”, “daal-waala” or “aloo-waala” bun-kebab (the one with eggs, lentils or potatoes respectively) are the customary orders people place, often with a knowing smile. When Pakistanis ask for “the bun-kebab with…”, they’re asking for more than a snack. They’re asking for an experience – Pakistani-waala.

In their oily paper packaging, bun-kebabs might get squished. They defy mass-production and don’t offer slick fodder for pretty food-porn.

But bun-kebabs are unpretentious. They’re home.