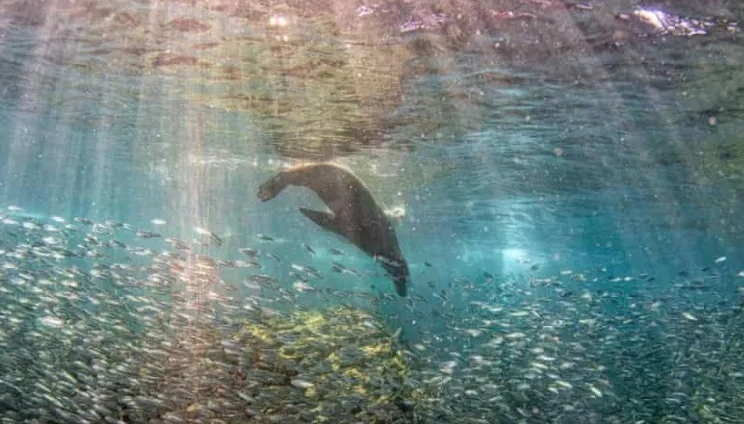 Strolling along a beach dotted with sea lion pups and their mothers barking at one another, utterly unconcerned by your presence, is a singularly magical experience. On the trail leading to the shore on tiny Seymour Island, noisily courting blue-footed boobies and frigate birds are equally unruffled by the presence of humans.

Getting up close to the natural world without disturbing it seems as refreshingly easy on the Galápagos Islands today as when Charles Darwin visited on HMS Beagle in 1835. Isolated from the mainland, the archipelago’s unique endemic species – from giant tortoises to finches – helped Darwin set out his theory of evolution in On the Origin of Species.

One of the reasons the islands are such a hotbed of life is that the shallower, nutrient-rich waters around the volcanic atolls are fed by a confluence of cold and warm currents. This provides a refuge for an array of migratory ocean-going species, from scalloped hammerhead sharks to leatherback turtles.

But it’s also why industrial foreign fishing fleets lurk at the edge of the Ecuadorian archipelago’s territorial waters. Nearly 250 vessels – 243 of them Chinese flagged, including vast fishing boats and refrigerated container ships – have logged an astounding 73,000 hours of fishing a month and pulled up thousands of tonnes of squid and fish.

Ecuadorian tuna boats are there, too: they circle the Galápagos marine reserve – an area of 133,000 sq km (51,000 sq miles) – and float hundreds of fish aggregation devices, or FADs. Conservationists have been sounding the alarm, saying that unprecedented pressure from overfishing, and excessive bycatch of sharks and other species, now threaten marine life in the world-renowned archipelago.

Their concerns have led to a new proposal: an expansion of the Galápagos marine reserve area, wrapping another swathe of protected ocean from the north, east and south around it like a scarf.

Speaking to the Guardian, Ecuador’s president, Lenín Moreno, said the proposal was based on his “government’s strong commitment to conservation, the protection of the environment and, in particular, the Galápagos Islands”. It was the same commitment he had set out at the COP25 UN climate change conference in 2019, he said.

Many conservation organisations are thrilled by the idea. “It is the first-ever smart proposal which benefits fishermen, biodiversity and reduces the impact of climate change,” said Matt Rand, director of the Pew Bertarelli Ocean Legacy project.

But not everyone agrees. The plan – which Moreno has notably not yet approved – would extend the marine reserve to 445,953 sq km, more than three times the size of the existing protected area.

It would also shut out Ecuador’s larger tuna fishing boats from three-quarters of the archipelago’s exclusive economic zone, extending for 200 nautical miles around the existing reserve. An exception would be made in the zone’s south-western quarter, which would be set aside for “responsible fishing”.

Luigi Benincasa, executive director of Atunec, Ecuador’s tuna fishing association, said the plan amounted to punishing local fishermen. “We must understand that a third of our catch, which we get in an exclusively Ecuadorian fishing zone, we won’t have tomorrow,” he said. “How is that beneficial [for us]?”

Fishing on the western side of the archipelago, which is about 620 miles (1,000km) from continental Ecuador, would have an impact on profits at a time of economic hardship, said Benincasa. In the Pacific port of Manta, the tuna industry provides work for up to 200,000 people, he said. The tuna sector makes up the vast majority of the country’s $1.6bn (£1.2bn) fishing industry.

“We would have to seek fishing grounds much further away with much greater fuel consumption, as well as having to compete with the international fleets,” Benincasa added. Ecuador has the largest and most productive tuna fleet in the eastern Pacific region, and the second-largest in the world, with more than 100 purse-seine net tuna fishing boats and nearly as many long-liners.

When it was created in 1998, the Galápagos marine reserve was the second largest in the world. Now it is number 33, outstripped in size and ambition by other South American nations such as Chile, which created the 740,000 sq km Rapa Nui marine reserve around Easter Island and has promised to protect more than 40% of its total marine territory.

Meanwhile, Ecuador’s tuna fishing fleet and the size of its catch have since more than doubled in size, says Eliecer Cruz, leader of Más Galápagos, a local initiative to expand the reserve. Research shows fishing productivity has increased by 104% in the islands’ exclusive economic zone this century.

Whale sharks, great hammerhead sharks as well as leatherback turtles and waved albatross, have all become listed as critically endangered in the IUCN red list since 1998 as industrial-scale fishing has increased. They are among 14 marine migratory species found in the archipelago’s waters – including Galápagos fur seals and sea lions – whose conservation status has worsened in the past two decades. (The range of the waved albatross extends to southern Chile but it only nests on the island of Española.)

But even though only small-scale fishing is allowed in the marine reserve, larger vessels get around the ban by luring the fish outside the protected zone using FADs. Known locally as plantados, they are used to target tuna, but sweep up other pelagic fish such as shark, sailfish and marlin, and attract sea lions, dolphins and turtles before drifting out of the marine park.

Walter Borbor, an artisanal fisherman from Santa Cruz island who line-fishes for tuna, has come across many of the floating fish traps, which are basically wooden rafts with GPS trackers attached and nets hanging down for up to 100 metres.

“The big boats throw them outside the reserve knowing there’s an infinity of currents that will carry them through and out again with a big shoal of smaller fish, which attract the bigger fish,” Borbor shouted over the noise of the outboard engine on his eight-metre fibreglass boat.

“We’ve collected at least 30 plantados. We reuse the nets to make hammocks and chicken coops,” he said. Pulling up a thrashing yellowfin tuna, the diminutive fisherman said he must make increasingly longer fishing trips for a smaller catch.

“Surrounding the islands there are many industrial boats that prevent the pelagic fish from coming in – they come here to spawn and to eat,” Borbor said.

“The spillover effect shows just how successful the marine reserve has been,” said Norman Wray, president of the Galápagos governing council. “But now we need to expand it.”

Robust fish populations have attracted too much pressure, Wray said, not just from the national fleet but from foreign vessels, which fish intensively on the edge of the exclusion zone.

Moreno must decide whether to commit to the reserve’s expansion by signing a decree before he leaves office on 24 May.

“An eventual increase in conservation measures in the Galápagos marine reserve would overlap with important areas of activity for the fishing sector, including artisanal fishing, with a possible negative impact for the national economy,” the president said when asked if he planned to expand the reserve. “For that reason, any analysis should be comprehensive, including all the environmental and socioeconomic aspects.”

If Moreno does not sign the proposal into law, it could face a longer and more convoluted route, as a parliamentary committee on biodiversity and natural resources would have to decide whether it should be debated and voted on in the national assembly.

Juan Cárdenas, an assembly member on the committee, said he backed the expansion proposal because of the islands’ world heritage status. “I understand the position of the fishermen but they are not the interests of our nation,” he said.

However, the powerful fishing industry is expected to exert its influence on Moreno and on whoever becomes the country’s next leader. Benincasa, the tuna industry representative, argued that as a developing country Ecuador could not afford to give away more of its ocean to conservation. “We shouldn’t be so naive,” he said.

Ecuador has signed up to the Global Ocean Alliance in support of the UK-led 30 by 30 initiative, an international commitment to protect at least 30% of the global ocean in protected marine areas by 2030. So far about 13% of Ecuador’s waters are safeguarded.

“It would be an incredible legacy to leave,” said Cruz.