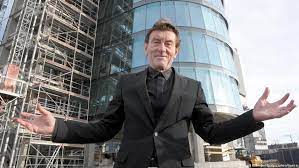 An early start in the US

Born in 1940, Jahn studied architecture in Munich and moved to Chicago, Illinois to study with modernist architect Ludwig Mies van der Rohe in 1966, but landed a job with well-known architect Charles Murphy. By the 1980s, he had become a star in the business and eventually ran the firm.

The architect is best known for his work with steel and glass. “We wanted to build buildings that combined solid architecture and engineering. A building has to be utilitarian and not just aesthetically pleasing,” he told DW in an interview in 2015. This image shows his Cosmopolitan Twarda 2/4 building in Warsaw, Poland.

Jahn also designed Berlin’s Sony Center, which opened in 2000 as part of a major reconstruction of Potsdamer Platz, which was once the no-man’s land at the border between East and West Berlin.

“We were interested in sustainability before the word ‘sustainability’ even existed,” the architect told DW. Throughout his career, he was an advocate for energy efficiency and highlighted the need for creating structures that are both modern and sustainable.

The architect was likewise responsible for these two unique towers on the Las Vegas strip in Nevada, USA. The Veer Towers, as they are called, were designed by his Chicago office. They also received a LEED Gold certification, which measures sustainability, in 2009.

Among Jahn’s other well-known works in Germany is the 63-story Frankfurt Trade Fair Tower (“Messeturm,” center), which was designed in a postmodern architectural style. It is the second-tallest building in the European Union and is one of the few buildings in Germany with its own postal code.

A controversial building in Chicago

James R. Thompson Center in Chicago is one of Jahn’s most significant creations from the 1980s, a time when the US was experiencing a building boom. Yet it’s also caused controversy due to the high cost of frequent repairs it requires and was put up for sale in early May 2021.

Jahn received numerous accolades for his work over his lifetime in Germany and the US. In 1991, he was listed as one of the 10 most influential US architects. He died at the age of 81 in a bicycle accident near his home in Illinois on May 8, 2021.