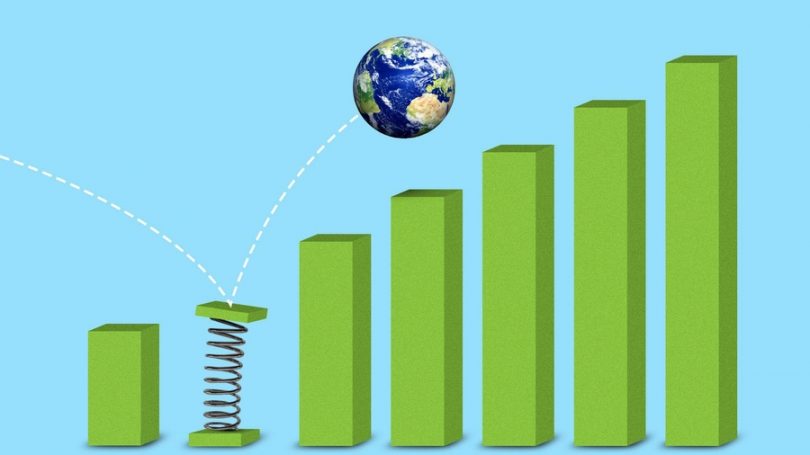 WASHINGTON DC: Some environmentalists and economists are pushing for “degrowth” — stabilizing or even shrinking the economy — to avert environmental catastrophe.

The big picture: Degrowthism may seem like the only reasonable response to the climate challenges we face, but the experience of enforced economic shrinking during the pandemic indicates the pain would outweigh the benefits — especially for the world’s poorest.

Where it stands: The global economy shrank by an estimated 4.3% in 2020, according to data from the World Bank.

That contraction was due both to the direct pain of the pandemic and the effects of social distancing measures, but it also led to a roughly 6% reduction in global carbon dioxide emissions — the biggest annual drop since WWII.

How it works: However accidental, 2020 represented perhaps the best example we’ve ever experienced of degrowthism in action.

For degrowthers, simply cleaning up the global economy by switching from fossil fuels to zero-carbon sources of energy isn’t enough. Economic growth — the goal of essentially every government everywhere — is itself the problem.

Environmental activist Greta Thunberg summed up the argument when she chastised delegates at a UN climate summit in 2019: “We are in the beginning of a mass extinction, and all you can talk about is money and fairy tales of eternal economic growth. How dare you!”

The movement now has its own dedicated academic journals, associations and conferences.

The catch: The very real human pain of 2020 — and the political fallout it created — should be taken as a warning sign to degrowthers.

A new Pew Research Center analysis found the ranks of the global middle income — those who live on $10.01 to $20 a day — fell by 54 million in 2020 compared to the number projected before the pandemic, while the number of global poor rose by 131 million.

And while carbon emissions did fall significantly in 2020, it came at a high cost. One analysis estimated that each ton of CO2 reduced due to pandemic-related degrowth will have an implied cost to the economy of more than $1,500.

That’s “an order of magnitude greater than the most costly of ‘technofixes'” like direct capture of carbon from the air, as Ted Nord-haus of the Breakthrough Institute wrote last year.

Between the lines: The strongest argument around degrowth is one rooted in a goal that its own advocates strive for: global equity.

In a piece posted earlier this week, economist Max Roser of Our World in Data estimated the amount of global growth required to bring everyone in the world up to the level of poor people in the fairly rich nation of Denmark would be 410%.

Whether or not global poverty can be truly conquered — meaning getting everyone at least to the minimum of the developed world — “overwhelmingly depends on whether the average incomes in those countries that are home to the poorest billions of people in the world will increase or not,” Roser writes.

Be smart: With reason, we tend to focus on the huge and growing wealth gap between the ultrarich and the middle class and poor in rich countries like the U.S. But a much bigger gap exists between even the relatively less well-off in the developed world and most of humanity.

Take electricity access, one of the basic fundamental requirements for a modern lifestyle: Californians use more electricity just to play video games than the total amount of power consumed by everyone in countries like Ghana and Kenya, according to one estimate.

Flashback: This isn’t the first time the idea of degrowth or economic stasis has been raised. Utilitarian philosopher John Stuart Mill argued in mid-19th century England that “economic growth in the richest countries had run its course.”

Yet as developmental economist Charles Kenny notes, at that time, the average income in England was just $2,858 — roughly the level of Egypt now.

Today, England has a much bigger population and average income of nearly $40,000, a fact it accomplished through growth.

What to watch: For all the environmental pressure growth has created, in recent decades, both rich and poor countries have been able to continue to grow while reducing many pollutants through more efficiency and cleaner energy.

Growing while reducing carbon emissions enough to avert dangerous climate change will be tougher, but that’s beginning to happen as well.

The bottom line: To paraphrase Winston Churchill on democracy, the pursuit of growth has its faults, but it still may be the least worst way to organize an economy.