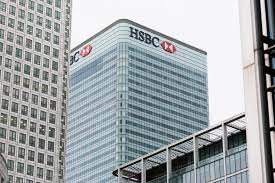 LONDON (BBC News): Banking giant HSBC has confirmed that top managers in its Canary Wharf HQ have lost their offices and will have to hot-desk on an open-plan floor. The move comes as HSBC pursues plans to shrink its office space by 40% in a post-pandemic shake-up.

Chief executive Noel Quinn told the Financial Times it was “the new reality of life” and that he would no longer be in the office five days a week.

“We don’t have a designated desk. You turn up and grab one,” he added.

Up to now, senior managers have been based on the 42nd floor of the building in east London in their own private offices.

But in future, they will be jostling for workspaces two floors down, while their old offices have been transformed into client meeting rooms and other communal spaces.

Mr Quinn told the FT that the old arrangement had been “a waste of real estate”, adding: “Our offices were empty half the time because we were travelling around the world.”

In a separate post on LinkedIn he said that after more than a year working from home, being based in an open plan office would allow him to “reconnect with colleagues and friends, and… be able to speak to them informally”.

He added that the bank as a whole would move to a “hybrid working model”, allowing most staff to work part-time from home on a permanent basis.

“A minority of roles can be done wholly remotely. We estimate, though, that most of our roles could be done in a hybrid way – and that includes myself and the executive team of the bank.” At the same time, HSBC is pushing ahead with one of the banking industry’s most drastic responses to the pandemic, including cost-cutting plans that will reduce its workforce by about 35,000.