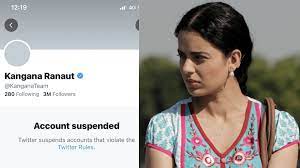 The twitter handle has been suspended on the complaint lodged by Stand Against Abuse Troll Harassment (SAATH) after the actress tweet sparked outrage and calls for action against the act.

The actress is famous for her ‘Twitter-wars’ with the Punjabi singer Diljit Dosanjh.