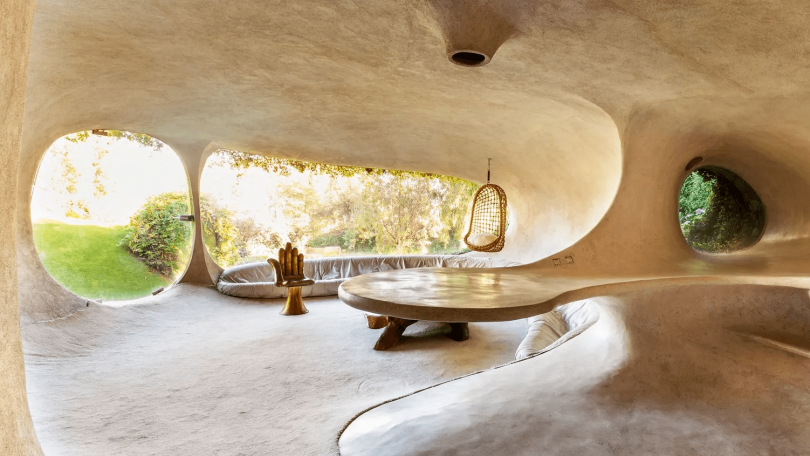 Of our homes reflect our characters, then the home of an artist is likely to be particularly intriguing. A new book, Life Meets Art: Inside the Homes of the World’s Most Creative People, opens the doors to a collection of interiors that have all at some point belonged to famous artists, sculptors, musicians or writers.

Working his way around the world, author Sam Lubell chose 250 of the most photogenic and memorable residences he found. Some are now museums containing works by the artists who lived and often worked in them; others can best be described as shrines. 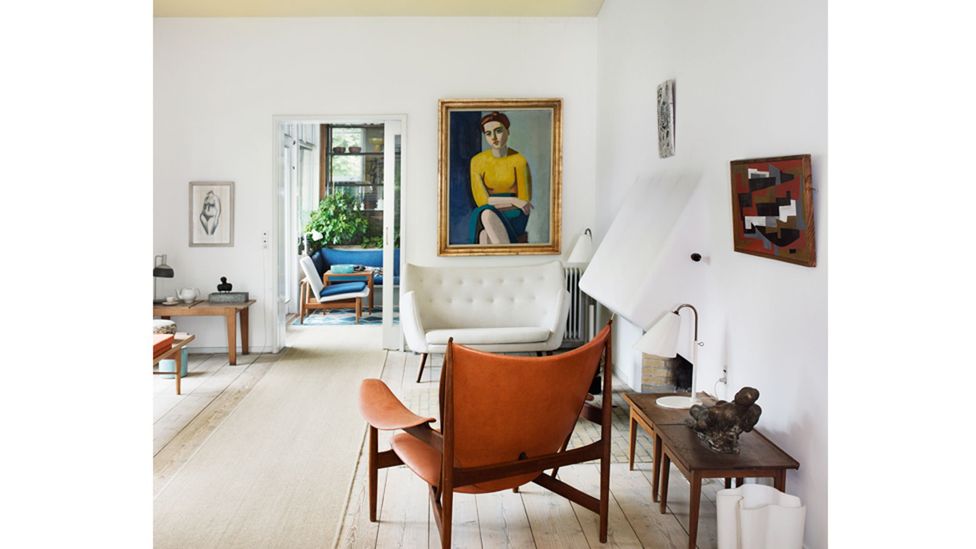 What do all these homes say about their owners? Well, for one thing they do not support the common image of the ‘starving artist in their garret’. The book, with very few exceptions, is packed with sumptuous, elegant and richly decorated and furnished homes.

Lubell admits: “If I did not like a place, I generally rejected it”. But it would be a mistake to think that, given the subject matter, this book is a compendium of good taste or a bible for decorators. Even though many rooms have been heavily curated, there’s still usually a sense of personality about them; an aura of the occupant, whether in the old pianos, bookcases and writing desks, or in the collected antiques and personal items. “The furnishings and personal effects of an artist can tell their story,” says National Trust curator Lucy Porten.

In the case of the family villa built by the Secessionist architect Otto Wagner, the personal effects of its last owner certainly tell a story. The villa, considered Vienna’s greatest Art Nouveau space, is today filled with incongruous artworks by Ernst Fuchs, a founder of the school of Fantastic Realism. 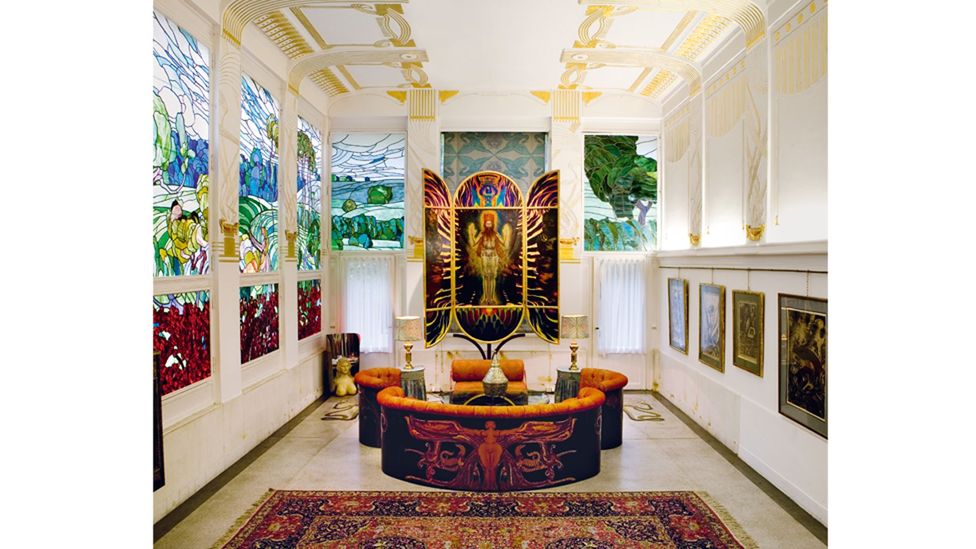 The story goes that as a penniless boy, Fuchs knew the house, and promised that he would one day buy it for his mother. By 1970, the then-abandoned villa was due for demolition, and Fuchs was able to fulfil his dream. He restored the villa in a hybrid of styles, and filled it with his fantastical art works. It is now called the Ernst Fuchs Museum.

Tempting as it is to assume that musicians and writers and other non-visual artists are generally unaware of their surroundings because their heads are full of higher things, it is not possible to make sweeping generalisations about the way artists live.

The homes of Puccini and Tchaikovsky were both well-ordered sanctuaries full of gorgeous antiques where they could compose in peace, whereas jazz legend Louis Armstrong wanted only to live in a vibrant neighbourhood. Despite the huge wealth he amassed, Armstrong chose to remain in a working-class, racially mixed area in Queens, New York. 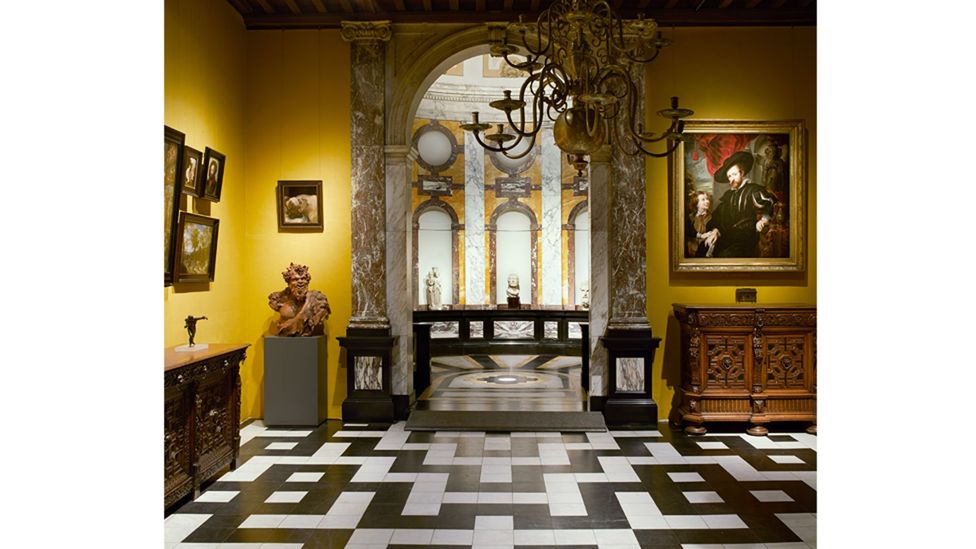 Another generalisation that falls apart when you explore the pages of Life Meets Art is that the homes of painters will somehow reflect the style of their paintings. Take a look at the habitat of Peter Paul Rubens, whose oils are a byword for voluptuous women and sometimes distressing scenes. Yet his home in Antwerp, Belgium, for which he drew the plans, is restrained.

While the house is much altered, basic elements like the portico and pavilion – based on Italian Renaissance proportions – remain exactly as Rubens designed them. Why an artist so devoted to perfect proportions in spaces should have produced so many chaotic and disordered paintings is a mystery.

The home of sculptor Gustav Vigeland again displays a taste that seems diametrically opposed to what Lubell calls the “zestfully physical” works the Norwegian created, and which are now displayed at Vigeland Park in Oslo. Vigeland’s home and studio is located in an austere red-brick building, designed by architect Lorentz Ree, which was built by the city elders in return for the pledge of his art collection. 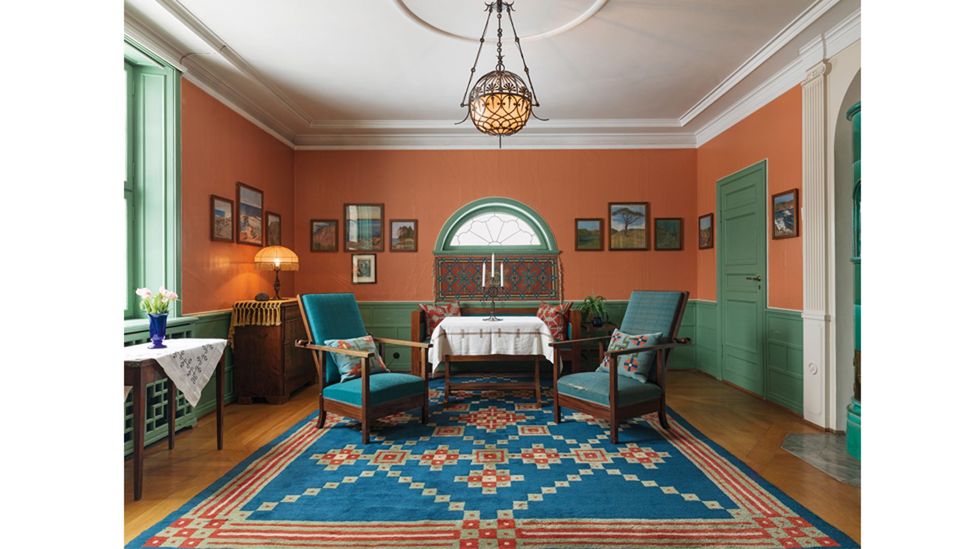 Perhaps having a home of his own was the incentive, but never having pursued interior design beforehand, Vigeland did an about-face and created a series of graceful pastel drawings of every last item of furniture, from pillows to candlesticks and lamps.

The German playwright and poet Friedrich von Schiller died just three years after finally buying his own home. In 1802, at the age of 42, Schiller – a colossus of the Enlightenment and a startlingly modern writer – had moved with his family to a mustard yellow house in Weimar, close to his good friend and collaborator Goethe. It is a fine two-storey town house of a surprisingly high standard for a writer of the period.

“These days I finally realised an old wish to own my own house,” he wrote to his publisher. “Because I have now given up all thoughts about moving away from Weimar and think that I will live and die here.” It was prophetic. Exhausted by his tireless work and illness, sadly Schiller died here just three years later. 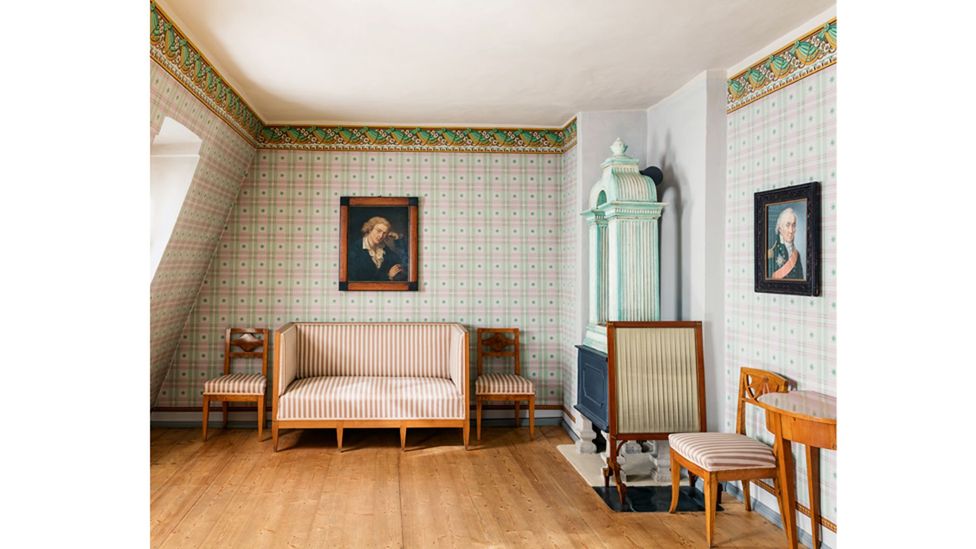 In the introduction to Life Meets Art we learn that Coco Chanel once said that an interior is “a natural projection of the soul”. A good example is Villa Santo Sospir in Saint-Jean-Cap-Ferrat near Nice, where Jean Cocteau lived. It belonged to his patron Françine Weisweiller, who in 1950 invited Cocteau to stay for a week’s holiday. Little did she know he would stay for 11 years, covering every surface with designs mostly inspired by subjects of the Greek pantheon.

He used a limited palette and called the sketches “tattoos”, and so the house, now a national monument, became known as the Tattooed Villa. “We have tried to vanquish the spirit of destruction that has dominated our era,” Cocteau said. “We have decorated surfaces that men dream of destroying.” 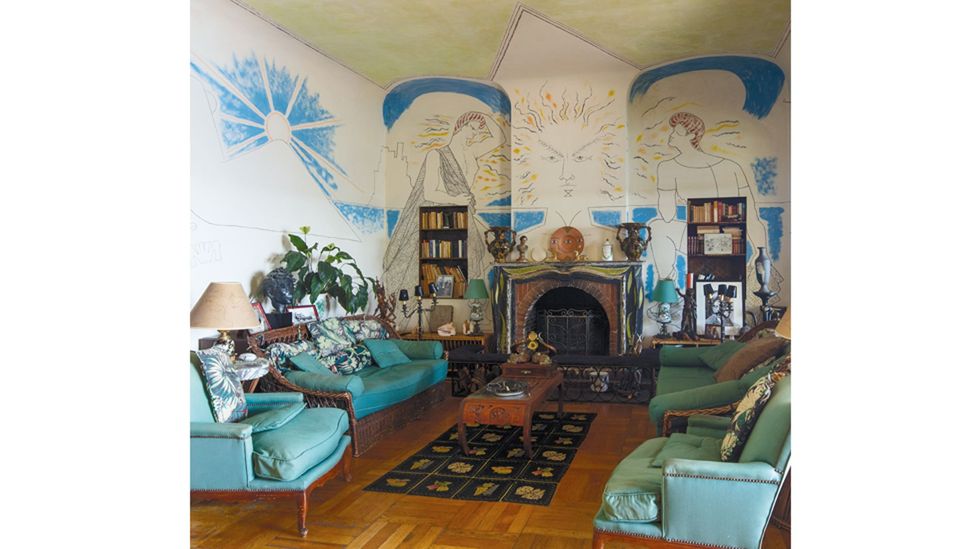 The house in the south of France where artist Jean Cocteau once lived is known as the Tattooed Villa (Credit: Life Meets Art/ Phaidon)

Another house that dramatically projects the colourful soul of its aristocratic owner is that of Lord Leighton, the Victorian artist and sculptor renowned for his painting Flaming June, a vision of a Pre-Raphaelite muse swathed in orange silk and fainting from the summer heat.

The studio is the crucible, it’s where the alchemical process all begins – Louisa Buck

Leighton House in Holland Park, London, began life as a simple brick structure with a double-height ceiling on a plot that Leighton had purchased. A secret doorway once allowed models to come inside without being seen by prudish Victorian neighbours. Numerous additions – inspired by Leighton’s travels – were later made to the building. The most memorable is the ‘Arab hall’, modelled after a 12th-Century palace in Sicily, with a peculiar mixture of Moorish tiles and fretwork, gilt friezes and classical columns. 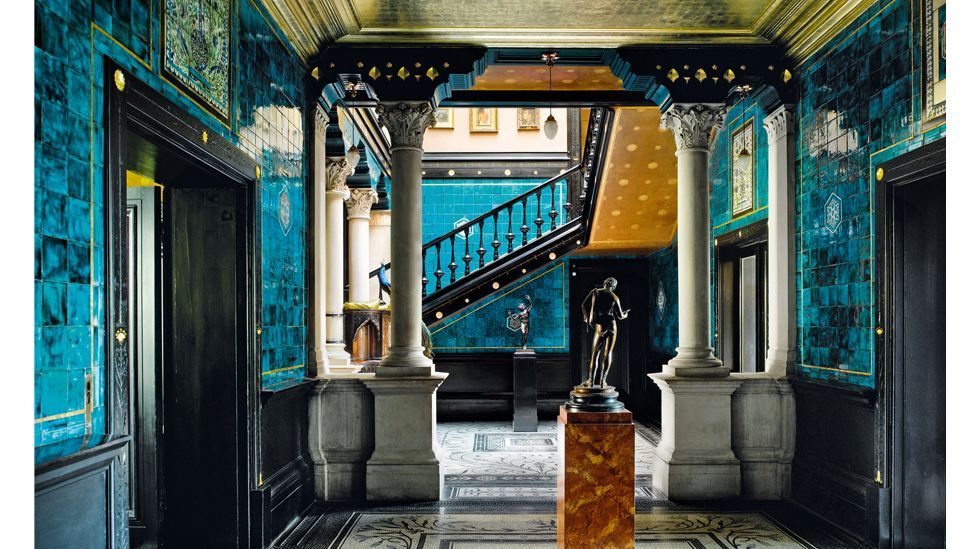 In order to solve the problem of winter smog, Leighton added a large ‘winter studio’ to the house that looked like a greenhouse on legs. His last addition was the ‘silk room’ filled with paintings and sculptures, several of them works by artists from a battalion known as the Artists’ Rifles – a voluntary force, founded in 1859, of painters, musicians, actors and architects – that Leighton commanded in its early years. Leighton was elevated to baron in 1896 but died of a heart attack at his Kensington home a day later, becoming the shortest-lived hereditary peerage in British history.

Preserved artists’ studios are always magnets for visitors, and while Leighton House is atypical, Life Meets Art is crammed with other examples. Among the most famous is the East Hampton barn where Jackson Pollock created his famous drip paintings, traces of which are still to be seen on the floor. “People are always fascinated by where art comes from. It’s a mystery even to the artist often,” Louisa Buck, contemporary art correspondent for the Art Newspaper, tells BBC Culture. “The studio is the crucible; it’s where the alchemical process all begins.”

Many of the interiors in Life Meets Art are of their time, but others feel surprisingly modern for their era. One striking example is the house of Danish furniture designer and architect Finn Juhl, which could have jumped straight from the pages of a current interiors magazine. The open-plan residence with its cool colours, classic Modernist chairs and hand-crafted everything anticipates today’s interiors to perfection. 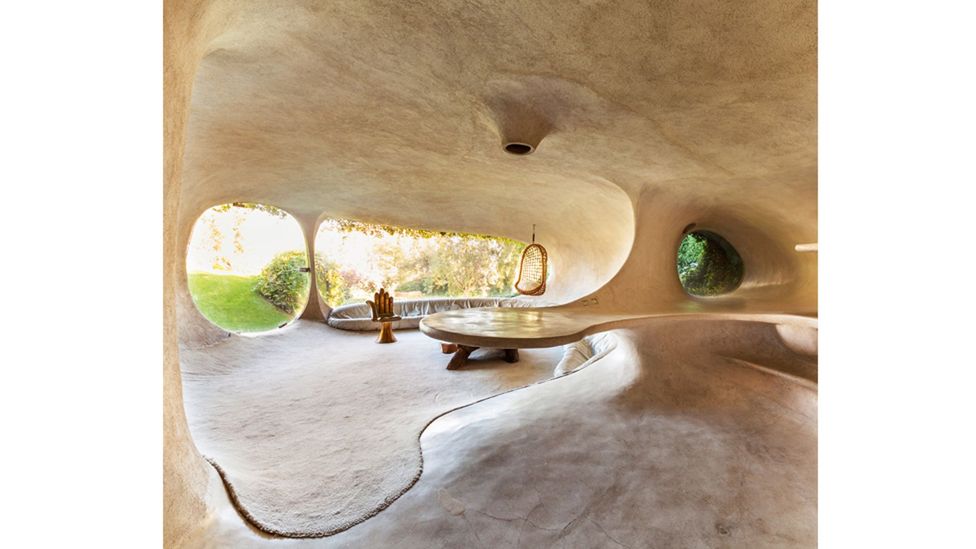 Meanwhile, the ‘Organic House’ of contemporary Mexican architect and designer Javier Senosiain near Mexico City may anticipate the future of architecture and design. The hobbit-like building is entirely inspired by curvilinear natural forms, such as mushrooms and seashells.

With an exterior covered in grass, flowers and shrubs, it boasts one of the world’s first fully green roofs. The interior resembles the inside of a cave network. “The straight line is pretty much absent from nature: everything… shifts in spirals,” says Senosiain in the book.

In the home of the ceramicist Kawai Kanjirō in Kyoto, Japan we find a shrine to his craft. Kanjirō was one of the founders of the Mingei, a Japanese folk-art movement that has parallels with the Arts and Crafts movement. 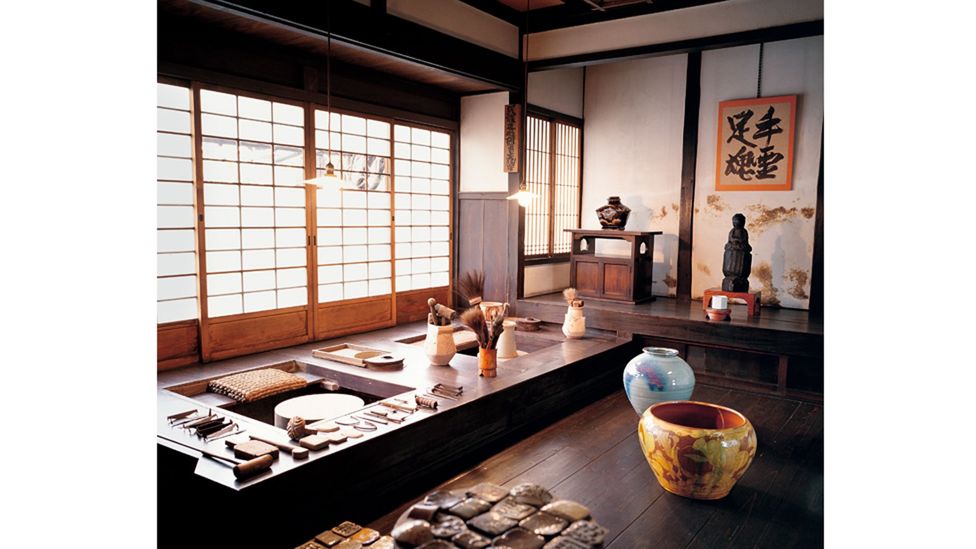 The home of ceramicist Kawai Kanjirō in Kyoto reflects the earthy colours and organic forms of his craft (Credit: Life Meets Art/ Phaidon)

Working with his architect brother, Kanjirō’s home is a cross between a rural farmhouse and modern urban home, and it clearly reflects his passion for blending modern techniques with traditional crafts. Within the walls are immaculately ordered and arranged examples of everything that Kanjirō and the Mingei movement admired in the work of humble, ordinary people, from simple organic forms to earthy colours.  It is an aesthetic that captures the spirit of today’s young designers to perfection. And like all artists’ homes, it gives an intriguing insight into the occupant’s temperament and preoccupations.