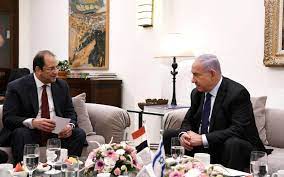 TEL AVIV (Monitoring Desk): Israeli Prime Minister Benjamin Netanyahu demanded the return of Israeli captives being held in Gaza in a meeting with the head of Egypt’s intelligence services Sunday, as Jerusalem and Cairo held high-level talks centered on shoring up a truce with Hamas in the Palestinian enclave.

The meeting came as Foreign Minister Gabi Ashkenazi told his Egyptian counterpart, Sameh Shoukry, that Jerusalem would not allow Gaza reconstruction to move ahead without a solution in place for the return of two civilians and the remains of two soldiers, held in Gaza for the better part of a decade.

Abbas Kamel, the head of Egypt’s intelligence services, was dispatched along with a security delegation to Jerusalem to meet with Netanyahu, and later traveled to Ramallah for talks with Palestinian Auth-ority President Mahmoud Abbas, before being slated to travel to Gaza for discussions with Hamas officials.

“President (Abdel Fattah) el-Sissi instructed the general intelligence chief to discuss with the Israeli Prime Minister (Benjamin Netanyahu) and concerned authorities the fixing of a permanent ceasefire and the latest developments on the Palestinian front,” an Egyptian official said.

Senior Egyptian security officials confirmed to AFP Sunday that Hamas’s leader Ismail Haniyeh would be in Cairo for discussions, but would not provide further details.

Netanyahu said during his meeting with Kamel that he raised the issue of returning the remains of soldiers and civilians being held in Gaza, as well as “mechanisms and processes to prevent the strengthening of Hamas and prevent the diverting of resources that will become available for the civilian population,” his office said in a statement.

“The two praised the ties, understandings and joint efforts of the two countries on security issues and various policies.”

Discussions with Israeli officials have touched on a set of measures that would allow materials, electricity and fuel into the Strip, as well as the possible expansion of maritime space allowed for Gaza fishermen, an Egyptian official said.

The official said Egypt had offered guarantees that rebuilding funds will not find their way to Hamas, possibly by going through an international committee led by Egypt or the United Nations that would oversee the spending.

But Israeli officials have also increasingly sought to link the reconstruction to the return of the captives in Gaza.

In his talks with Israeli officials, Kamel also discussed the situation in Jerusalem and ways to ease tensions in the holy city, including a relaxation of Israeli restrictions at the Temple Mount, and how to prevent the planned eviction of Palestinian families from the Sheikh Jarrah neighborhood in East Jerusalem, Egyptian officials said.

Kamel was also tasked with ending political divisions between rival Palestinian groups Hamas in Gaza and Fatah in the West Bank, Egyptian officials said. Cairo’s intelligence agency, which is Egypt’s equivalent of the CIA, usually handles Egypt’s ties with Hamas and other Palestinian groups in Gaza.

Senior Abbas advisers Majed Faraj, who directs the Palestinian intelligence services, and Hussein al-Sheikh, Ramallah’s liaison to the Israeli side, both attended the meeting.

The leaders of all major Palestinian factions will participate in the talks “as part of Egypt’s efforts in support of unifying the Palestinian position,” says Egyptian official media.

In an interview with Vice News, the leader of Hamas in Gaza says the group was ready to agree to a ceasefire with Israel hours after firing rockets toward Jerusalem, kicking off 11 days of fighting in the coastal enclave.

Ashkenazi’s visit to Cairo was the first by an Israeli foreign minister since 2008, as Cairo and Jerusalem looked to bolster bilateral ties while following up on the ceasefire.