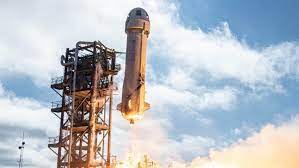 The US entrepreneur’s Blue Origin company says it will launch a crew aboard its New Shepard rocket and capsule system on 20 July.

The astronauts are likely to include company personnel, but one seat is being auctioned online.

This is the so-called Kármán Line, which has been designated by broad international agreement as the starting point of space.

“Only 569 people have ever been over the Kármán Line. With our New Shepard vehicle, we’re about to change that and change it dramatically,” said Ariane Cornell, Blue Origin’s director of astronaut sales.

Blue Origin’s announcement is further evidence of a resurgence in space tourism after a gap of almost 12 years.

Mr Bezos’s proposition is just one of several now open to the super wealthy. Rival businessman Elon Musk is expected to launch one of his SpaceX Dragonships in the autumn with an all-civilian crew aboard. It will go orbital; the capsule will stay up for several days.

It operates from desert land in Van Horn in West Texas.

During a flight, the booster unit lifts the pressurised passenger vessel to about 76km in altitude, where the pair then separate.

Momentum carries the capsule on upwards into space, before dropping back down to the ground under three parachutes. The booster also comes home in a controlled manner, making a propulsive landing on a concrete pad.

Blue Origin is hoping the New Shepard experience will prove a big draw. Passengers will experience about three minutes of weightlessness at the top of the climb. They’ll also get to see the blackness of space and Earth’s curved horizon.

For the moment, the company is not discussing future pricing options – just the details of the public auction for one seat on that first mission in two months’ time. Blue Origin says the cash raised from this particular sale will go to its foundation that promotes science and technology education.

“This is a nascent market,” said Ms Cornell. “We’re opening the doors and look forward to seeing what the market says.

“I personally think people are going to see what a cool experience this is and are going to want to do it themselves. And then, as hopefully the prices come down, the scale goes up.”

Throughout the 2000s a number of high-value individuals paid to visit the International Space Station (ISS). But this tourism, organised under the patronage of the Russian space agency, ceased in 2009.

Now, it seems, the sector is being rekindled. As well as Jeff Bezos and Elon Musk, British entrepreneur Sir Richard Branson continues to push his Virgin Galactic rocket plane concept. There are also those who want to launch private space stations this decade. Among these is Axiom, a company started by a former Nasa ISS programme manager.

Blue Origin’s announcement was timed to coincide with the 60th anniversary of the first spaceflight made by an American astronaut – Alan Shepard, in whose honour the new tourist vehicle is named.

Alan Shepard conducted a 15-minute sub-orbital flight in his Project Mercury Freedom-7 capsule on 5 May, 1961.