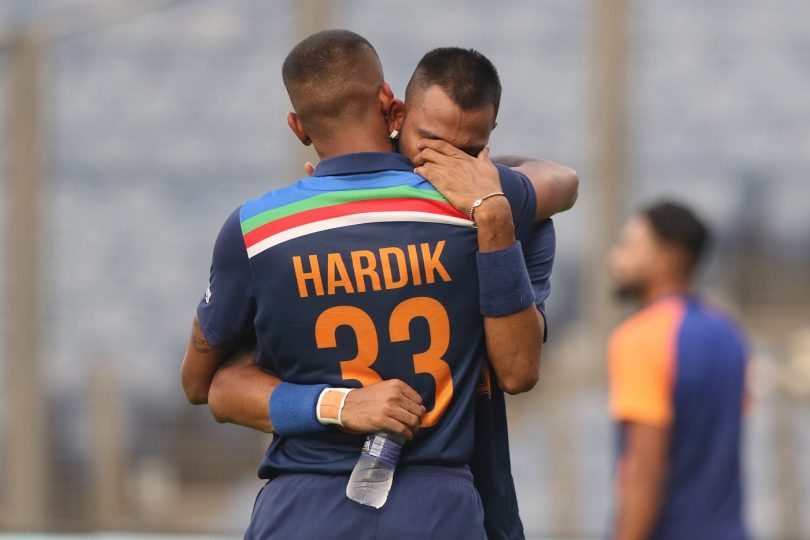 PUNE (Agencies): Indian cricketer Krunal Pandya on Tuesday made a record for himself by smashing the fastest 50 by an ODI debutant during the first game of the three-match One-Day International against England on Tuesday. But more importantly, he dedicated his achievement to his father, who recently passed away.

According to a piece by The Indian Express, after hitting the half-century, Pandya looked up to the skies to celebrate the moment as his side posted 317/5 in their 50 overs. The match is currently underway at the Maharashtra Cricket Association Stadium, in Pune, India.

But as Krunal’s brother Hardik Pandya went up to him to give him a hug, Pandya couldn’t control his tears as the 29-year-old remembered their dad. “This one is for my dad. It was very emotional,” said Krunal Pandya during a post-innings interview. These were the only words he could manage to utter before tearing up once again. Pandya had smashed 58 off 31 balls.

His innings, coming on his debut, was the fastest by a debutant in the history of ODI cricket, per the piece. Krunal and Hardik Pandyas’ father died at the age of 71 back in January this year after suffering from a cardiac arrest, the piece said.

Krunal, who had been leading the Baroda team in the Syed Mushtaq Trophy, had left the tournament mid-way to return home at the time.