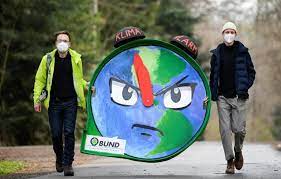 Partially upholding a series of claims by environmentalists and young people, Germany’s Constitutional Court ruled that Berlin’s current goal of reducing CO2 emissions to 55 percent of 1990 levels by 2030 was “incompatible with fundamental rights”. The current measures “violate the freedoms of the complainants, some of whom are still very young” because they “irreversibly offload major emission reduction burdens onto periods after 2030”, the court ruled.

It argued that while the state had not violated its duty to protect citizens against climate change, the government had nonetheless not set out the timeline for further emissions reductions in enough detail. Assessing that the risk of “serious burdens” being put on generations beyond 2030 as significant, the court called on Berlin to “at the very least determine the size of the annual emission amounts to be set for periods after 2030”.

Besides an emissions target for 2030, Germany’s new climate change law introduced by Merkel’s government in 2019 includes a range of policies, including incentivising renewable energies, expanding electric car infrastructure and carbon trading. The law was passed in order to comply with the 2016 Paris Agreement, under which countries aim to keep the global temperature increase to under two degrees Celsius, and ideally closer to 1.5 degrees, by 2050.

Germany said last month it had met its annual climate goals set out by the law in 2020, in part due to a reduction of activity during the coronavirus pandemic. Yet activists have long argued that the law does not go far enough, prompting a series of legal claims against the government to toughen the measures.

Supported by Greenpeace and German Fridays for Future activist Luisa Neubauer, the claimants included a group of nine young Germans whose families’ agricultural or sustainable tourism businesses have been threatened by heatwaves and floods. “We have won! Climate protection is not a nice-to-have, it’s a fundamental right,” tweeted Neubauer, 25, in reaction to the ruling.

The government also appeared to welcome the ruling, with conservative Economy and Energy Minister Peter Altmaier calling it an “epochal” decision for “climate protection and young peoples’ rights”, which would also give “planning security to business”. Environment Minister Svenja Schulze also said the decision was an “exclamation mark for climate protection”. Yet the decision in fact heaps further pressure on the government at a time when the environmentalist Green Party has taken a surprise lead in the polls ahead of September’s general elections.

Several recent polls have shown the Greens as the most popular party, ahead of both Merkel’s conservatives and their centre-left coalition partners SPD. If the party can hold their lead, then their candidate Annalena Baerbock could become Germany’s first ever Green chancellor in the autumn.

Armin Laschet, the candidate for Merkel’s CDU party, has meanwhile been accused of neglecting environmental policies. “It’s not enough to see the environment as mere decoration, it is a central issue,” said Laschet’s Bavarian rival Markus Soeder amid a bitter battle for the conservative nomination earlier this month.