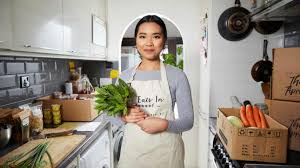 The Covid-19 era has seen an explosion in food businesses based in people’s homes. According to the Food Standards Agency, 44% of new ventures registered since March 2020 are run from domestic kitchens, as new platforms emerge (All About the Cooks, NoshyCircle, GruBie) to connect home cooks with hungry diners. Increasingly, anyone can compete with local restaurants to sell hot takeaways or ready-meals.

“I want it to be as easy to sign-up to All About the Cooks as it is to let out a room on Airbnb,” says founder Claire Ladkin of the currently Bristol-only site. “There’s enormous talent in communities and little opportunity to share it. It’s difficult to get into food. You have to work evenings, start at the bottom in a restaurant or risk setting up as a business.” All About the Cooks wants to democratise getting started, nationally, in return for its 12.5% commission: “Enabling people who might find it difficult to make money if they have language barriers or caring responsibilities. The social impact is a massive driver.”

Commercial home-cooking is not new. Street food traders and cake-makers frequently work from home. You may remember Prince Cofie Owusu who, after building a serious following on Instagram (now 144K followers) and, in 2018, appearing on BBC Two’s Million Pound Menu, went from dispatching meals from his mum’s Camberwell flat to running Trap Kitchen sites in Manchester, London and Birmingham.

Covid-19 has supercharged that trend. For furloughed or newly unemployed chefs and keen cooks, it offers immediate income at a time when ordering food online has taken off to an extraordinary extent. As the profiles below illustrate, talented or social media savvy cooks can now quickly establish promising businesses.

Realistically, most home-based businesses launched in the last year – 14,731 across the 187 local authorities using the Foood Standards Agency’s registration portal – will not create full-time jobs. Cooking at scale in a domestic kitchen is difficult. Many will remain part-time endeavours – side-hustles in unprecedented times. That flexibility is attractive. If you love food, you can work set hours, earn a little money doing something rewarding.

Ladkin dreams of getting a home baker’s brownies into Waitrose. For most, ambitions are more modest: “Our cooks vary from talented home cooks to ex-professionals. But they all seem driven by a desire to share their food. They want it to be appreciated.”

Every Thursday, Chutima Honsakul is up at 3am to cook and pack around 20 meal-kits for national next-day delivery. “Night shifts are normal, for me,” says the 23-year-old, a furloughed casino cashier. “It’s something I’m passionate about. I don’t question it.”

We got rid of furniture to make more storage room

Honsakul is on a mission and not just to dispatch her food in the freshest state possible. She wants, she says, to educate people on how to cook Thai food authentically. “I see bloggers on Instagram, posting Thai recipes, putting all these random ingredients in, and it infuriates me a bit.”

Last year, that irritation was flipped into an Instagram page of recipes and food tips, @kceatsin. The positive reaction it received (4,800 followers and counting), set Honsakul thinking that – as other locked-down bloggers and amateur cooks began to retail food – there might be a market for her moo ping (pork skewer), laab gai (chicken salad) or pad thai finish-at-home meal kits (£6 to £32 for two people).

She felt confident in her cooking, having learned from her mum, a former street food trader in Rayong and having worked in her uncle’s Thai restaurant for years, albeit waiting-on but watching the chefs closely.

What followed was months of trial and error, learning about waste, portion control, packaging materials, mastering the 3D puzzle of the efficiently packed delivery box and rearrangement of Honsakul’s one-bed house. “We got rid of furniture to make more storage room, bought another cupboard for my inventory and another fridge,” she laughs. “It’s like a warehouse.” Honsakul’s partner also runs an e-commerce business from home. He understands the logistical issues.

If all that sounds difficult, the bigger story of Thai Apron’s November launch – from finding a web designer on freelance job site, Fiverr, to sharing courier tips with fellow traders – is how easy Honsakul has found it to get advice, network and market the business, entirely online. To the extent, she is already pondering future expansion, post-pandemic: possibly employing an assistant, renting kitchen space, launching a street food stall.

After ordering their food, Honsakul approached writer, cook and chilli oil maker, Pippa Middlehurst, AKA @PippyEats, and Manchester’s Yaoyao Noodles, for pointers: “They were really helpful. Yaoyao let me buy packaging and insulating liners from them – the websites want you to buy them in pallets and, obviously, I wasn’t doing that many orders – and I also make condiments which I sell on Pippy’s website.”

Similarly, Honkasul’s “big break” came about from an online contact, the Little Pasta Company, recommending her to the Plateaway meal-kit platform. Illustrating how online can level the commercial playing field, Honsakul is listed on Plateaway alongside established London restaurants including Bancone and Patty & Bun. “It’s weird,” she says, clearly thrilled: “I’m still very small and there I am, next to Shoryu Ramen.”

We’ve all experienced the pandemic differently but for Paul Murashe it has been “a rebirth”. “My life has taken this U-turn and I’m up at 6.30am with a jump in my step. I would never have this energy and positivity had the pandemic not put me in this position.”

These are creations from our heart. To deliver that to somebody is a pleasure

Early last year, after a globetrotting restaurant career (Sydney, New York, London), latterly in senior management roles in Mayfair venues such as Sexy Fish and Nobu, 49-year-old Murashe was planning to open his own restaurant in Hackney Wick. The youngest of eight children from a “very humble” background in Sheffield, AYO (“joy” in Yoruba) was meant to be a reset for Murashe. “It was about getting away from Mayfair, making an imprint in a community, dedicating time to working alongside schools and older people – giving back.”

Then Covid hit and by July that restaurant dream was dead. Murashe was shaken but undeterred. “Life had been turned upside down,” he says. “But I’ve got a new start.”

Murashe had an extensive network of hospitality contacts who could help him finesse that lasagne (Hill & Szrok beef, Neal’s Yard cheeses, hand-kneaded pasta) and, in October, he moved from his flat, with its two hotplates and mini-bar fridge, to live with a friend near Tower Bridge, whose spacious kitchen made production realistic.

After a soft November launch, Murashe’s connections in food and PR paid off too, as he was contracted by Moschino to make food for the Christmas boxes it gives to key business contacts. Perfect for a man whose hand-tied, parchment packaging was inspired by Comme des Garçons: “It needed to be like a gift.”

Murashe has moments of self-doubt, usually “at the beginning of the week, freaking out, when I can’t see any orders”, but business is building. He caps production at eight meal boxes a day. “I want it to be about excellence. That’s comfortable.” But he is already thinking of potential expansion into pasta classes, private dining and a more mass-market version of his ice-cream.

Outwardly, Murashe has smoothly pivoted from one gilded career (“My boss was Robert De Niro” – one of Nobu’s founders) to another. He refuses to be drawn on his personal finances and how urgently or not he needed AYO to work. Either way, he is clearly a grafter. “As a kid, I didn’t do one paper round, I did two. I can’t sit on my hands.” He was pot-washing in Sheffield restaurants aged 15 and still works 12-hour days.

His deliveries run into the evening, six days a week. “I don’t want to sound like a psycho, but these are creations we make from our heart. To deliver that to somebody, because I’m such a face-to-face person, it’s a pleasure.”

Given that personal investment, any criticism must sting. “Everyone has a different palate,” says Murashe, diplomatically. “I’ve taken punches for 25 years. You grow a thick skin. Egos have to be pushed to one side. Having this career, then cooking – it takes a lot.”

“Like most of the country,” says chef Dan Kenny, recalling the traumatic uncertainty of March 2020, “I spent the first week drinking heavily and two depressed months, thinking, ‘What the hell will we do?’”

We flogged kebabs from a window. It was fun for everyone in boring lockdown

The answer, says Luka Mokliak, former head baker at St John in London, was “flogging kebabs from a kitchen window”. The kitchen window at Kenny’s flat in Brighton, in fact; a tiny space on a dimly lit, residential side street which, on Wednesday evenings last summer, the duo turned into the city’s hottest food destination. “It looked like a drug deal, handing brown bags out of a window,” says Kenny. “We’d play loud music. It was fun for everyone in boring lockdown. The neighbours liked it.”

Prior to Covid-19, life was more sedate. Kenny, 36, owned the Set restaurant at the Artist Residence hotel, working alongside Mokliak in “a strange setup” where they created tasting menus for 12 diners every Monday to Wednesday. In May, furloughed and desperate for distraction, they began to discuss Five Star. The idea, says 35-year-old Mokliak, was to see “how good a kebab could be if we put all our knowledge into it”. By June, they were taking orders.

Unable to afford a kitchen, Kenny read about people cooking from home. A friend designed a logo, Kenny spread the word on social media and they set about developing extravagant, £12 kebabs using salt-marsh lamb, glazed sweetbreads, chilli-bean braised pig’s head, wagyu beef and Exmoor caviar. The menu went up on Instagram every Friday. On Monday orders were accepted, then customers were given the address and a collection time, to avoid lengthy queues. People paid cash. Amazingly, in four months, Five Star had just one no-show.

Selling 40-ish kebabs each week was easy; producing them less so. Working around their tolerant partners, Kenny and Mokliak prepped in their individual kitchens for days. “It really shows a home kitchen’s limitations. On a commercial induction hob, you can bring 20 litres of stock to boil in half an hour. At home, it took 12 hours. Bread was a massive issue too,” says Mokliak. “I’d mix 10kg of dough by hand, strip the fridge of normal food and fill it, then every Wednesday I’d be up at 5am shaping and frying flatbreads.”

Add in a weekly deep clean that involved removing every domestic pan, jar and utensil, and, as enjoyable as it was, a regime this punishing was not sustainable in a one-bedroom flat. Not for such a modest profit.

Kenny doesn’t rule out further residential pop-ups, but the regular service stopped in September and, since Christmas (the Set is due to reopen on a new site in May), the two have been in a professional kitchen developing Five Star meal kits for national delivery. A permanent venue may follow. As a still-surprised Kenny puts it, “It blew up.”