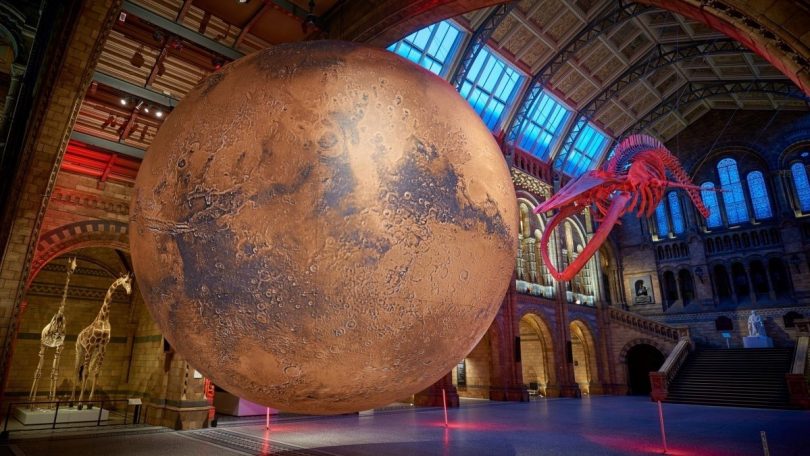 Last week, humanity made a major leap towards resolving the age-old question: Was there life on Mars? With bated breath, the world witnessed NASA’s Mars 2020 Perseverance Rover successfully land on Thursday, February 18, after a seven-month journey through space. It was the first rover to be sent to our planetary neighborwith the stated mission of searching for traces of ancient microbial life.

To mark thehistoric moment, London’s Natural History Museum has unveiled an enormous replica of Mars at its main hall. The installation, made by the British artist Luke Jerram, is suspended from the Hintze Hall’s ceiling alongside its 82-foot-longblue whale skeleton. For ambiance, the museum has also illuminatedthe hall in Martian-red lighting.

Furthermore, two scientists from the museum, Caroline Smith and Keyron Hickman-Lewis, are advising NASA’s Mars team on rock and soil sample collection. Their work is part of a collaboration between NASA, the UK Space Agency, and the European Space Agency.

“This is the culmination of years of intensive effort from thousands of scientists and engineers at NASA and around the world,” said Smith in a press release. “We are so excited to reach this milestone in the mission, to see Perseverance land on Mars and start exploring the different rocks and geological features with the onboard cameras and scientific instruments.”

Smith, who heads the Earth Sciences Collections at the museum, will be studying the mineralogy and geochemistry of rocks found at Jezero crater, the site of a Martian lake that existed 3.9 billion years ago. The professor will also contribute to planning how the samples will be curated upon their arrival on earth.

Hickman-Lewis will be studying the environments reflected by the sedimentary rocks found at Jezero crater and their potential to preserve ancient microbial life, the museum said.

“Jezero crater provides a splendid window into the early history of Mars, when the planet may have hosted a biosphere,” Hickman-Lewis said.

“Traces of this biosphere, which was likely microbial, may be challenging to identify and so we will rely upon the rover’s instruments to help us make decisions as to where and what we should sample,” the scientist added. “Once returned to Earth, this unique set of samples will give us a deep understanding of the geology of Mars.”

Meanwhile, Perseverance has sent back high-resolution images of its landing at the Jezero crater. According to NASA, the majority of robot’s cameras capture images in color, unlike past rovers. Since the first black and white image of the landing, the agency has been steadily updating its website with breathtaking images in full-color.

The six-wheeled robot also carried a helicopter called “Ingenuity,” the first of its kind on another planet. A fragment of aMartian meteorite from the Natural History Museum’s collection, which landed on Earth between 600,000 and 700,000 years ago and was discovered in Oman in 1999, was also sent with the rover. The meteorite, named “Sayh al Uhamiyr 008” (or SaU 008), will be used for calibration purposes as the rover examines Martian soil. Furthermore, the rover will be the first to collect sound recording from Mars.

Follow-up missions will collect the samples that will be extracted by Perseverance over the next decade and deliver them to earth sometime in the 2030s. If the samples provide proof of past life forms on Mars, it “would be one of the most significant scientific discoveries in history,” Smith said.