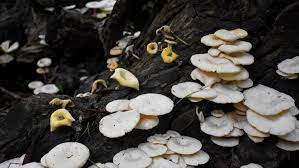 In the wake of California’s worst-ever wildfire season, researchers are exploring how mushrooms can help detoxify polluted soil and water. Scientists and volunteers at CoRenewal, a nonprofit dedicated to ecological restoration, are conducting the experiment in burn zones along high-risk waterways in Northern California.

Following the 2020 wildfire season, CoRenewal is researching how fungi can filter and break down these toxins—a process called mycoremediation. First, the team constructs wattles, or straw tubes, inoculated with oyster mushrooms, then places them on the banks of waterways. The idea is that the wattles will physically prevent erosion, while the mushrooms inside them will absorb and biodegrade toxins. Researchers will compare control wattles with inoculated wattles to collect baseline data.

“By using nature-based systems, we are working with ancient mechanisms that nature has been using for millions of years to keep and help restore balance to our ecosystems,” Taylor Bright, a researcher at CoRenewal, tells Food Tank. Bright also serves as secretary and researcher at Bay Area Applied Mycology, an adjacent research-based organization.

Mushrooms can also absorb heavy metals. But because heavy metals cannot be further broken down, metal-laden mushrooms must be disposed of at toxic waste facilities, where they are most often incinerated, then their ash disposed of.

This is not the first time scientists have used mycoremediation during wildfire cleanup. After the Tubbs, Nuns, and Pocket fires in 2017, The Fire Remediation Action Coalition deployed more than 56 miles of wattles across Sonoma County—most inoculated with mushrooms. And following the 2018 Camp Fire, a mushroom farmer who lost his property to the blaze, Cheetah Tchudi, founded the nonprofit Butte Remediation to provide his neighbors with no-cost mycoremediation services. Tchudi is now working alongside CoRenewal.

Mycoremediation has also proven successful in other applications. In 2019, The Lands Council reduced polychlorinated biphenyl (PCB) levels in Washington’s Spokane River by 46 percent using local fungi and bacteria. Mushrooms have even been found on the site of the Chernobyl nuclear meltdown in Ukraine, where scientists believe they have absorbed radiation.

“We hope that through our findings, we can help the public sphere become more familiar with mycoremediation, and encourage curiosity and acceptance of bioremediation ideologies,” Bright tells Food Tank.

The CoRenewal team recognizes that wildfires will be a reality in California for the foreseeable future. They hope that bioremediation practices, if proven to be effective, will one day be adopted by organizations like the Federal Emergency Management Agency and Environmental Protection Agency.

“Mycoremediation as a field of study and scientific inquiry has come a long way in the past century, and yet is still in its infancy when compared to its far-reaching possibilities,” Bright tells Food Tank.