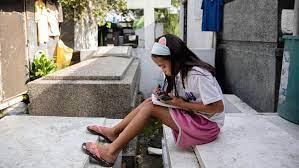 Rights groups warn that children across the world are being pushed into abusive situations, from early marriage to child labour.

Across the world 800 million children are still not fully back in school, Unicef is warning, with many at risk of never returning to the classroom the longer closures go on. There are at least 90 countries where schools are either closed or offering a mix of remote and in-person learning.

The UN agency’s chief of education, Robert Jenkins, told the Guardian that the closures are part of “unimaginable” disruption to children’s education.

“I didn’t imagine the scale of the closures when schools shut last year, and I didn’t imagine it going on for so long. In all our scenario planning for disruption, this possibility was never raised,” he says.

“At the peak of the pandemic 1.6 billion children were not in school and here we are, a year later, and 800 million are still suffering partially or fully disrupted education.

“There are a lot of lessons that need to be drawn, and one is the impact that prolonged school closures have on children.”

A new Covid-19 Global Education Recovery Tracker from Unicef, the World Bank and Johns Hopkins University is monitoring closures across the world, analysing where children are learning at home or at school.

Humanitarian organisations say the closures have contributed to a range of increasing abuses and degradation of children’s rights across the world, from increasing use of child labour to a rise in child marriages, often in communities were children already struggled to access education.

While it is too soon for large-scale evidence to emerge, across the world human rights groups are seeing children increasingly taking on work as school closures take their toll.

A Save the Children report out this week warns that in Lebanon children are being put into work by parents desperate for money. The charity fears many of the children will never return to school. Jennifer Moorehead, the charity’s Lebanon director, said: “We are already witnessing the tragic impact of this situation, with children working in supermarkets or in farms, and girls forced to get married.”

In Uganda, schools have been closed since March 2020, putting 15 million pupils out of education. Only certain classes with exams coming up have been allowed to return. The rest will return in a staggered way in the coming months, though thousands of girls will not, having become pregnant or been married off in the intervening period.

In the Gulu district in the north of the country, Ambrose is making bricks under the burning sun for pennies, rather than attending classes. His plight is part of a wider rise in children working in the region. “Making bricks is very hard,” says the 11-year-old, who suffers from an aching back and rashes across his body.

The children here still have fun, sometimes finding time to play hide-and-seek or perform tricks with skipping ropes, but Ambrose does not know if he will ever go back to school. His mother worries about the physical impact this is having on her children.

“Bricks bring problems. Physically, you feel pain in your arms,” she says. But she can’t see any other way for them to survive.

Girls have been particularly hard hit by the closure of schools across the world. In countries such as Afghanistan teenage girls already had a high dropout rate with about 2.2 million girls not in school before the pandemic. Now, groups supporting them fear that an increase in early marriage will leave even those who want to continue their education unable to do so.

In Kabul, 15-year-old Khatema is recovering from the death of her baby after a brutal and damaging labour. Doctors believe it was linked to her young age.

“She is still in shock,” her mother, Marzia, 40, says. “She thinks the baby is being kept alive in a machine somewhere, so we are not forcing her [to accept the truth]. We will tell her when we take her home.”

Her father decided she had to be married when her school was shut in March last year because of the pandemic.

Khatema’s family immediately felt under pressure to find her a husband. Her father was worried that she would bring shame on the family by being at home without proper supervision. He decided to marry her to a farmer much older than her, and they rushed the ceremonies to ensure that Khatema would be moved to her husband’s house before the lockdowns started.

“I wanted her to finish her education, but no one listens to me,” her mother, Marzia, says.

“I loved going to school,” says Khatema. “I only had one more year left, so it felt really bad when I was asked to leave. I was good at it too. I even wanted to go to the university someday. No one asked me if I wanted to marry.”

Schools in Kabul have finally begun to open in the past week and Khatema hopes she might return – and avoid becoming one of the millions of pupils whose education ends permanently during the pandemic.

While remote learning has become a familiar concept during the pandemic, it is not a panacea, particularly in areas with poor connectivity, or where parents cannot afford to pay for internet access. For children with disabilities, remote learning can exacerbate those difficulties.

In Colombia 12-year-old Andrés joins classes on his parents’ mobile phone from his village near the Venezuelan border on the Catatumbo River. The area’s frequent lightning storms regularly knock the internet out of action.

“It’s not the same seeing your teacher on a screen,” he says. “The connection is always breaking up.”

It’s not the same seeing your teacher on a mobile phone screen. The connection is always breaking up

Andrés has spastic paraplegia, which impairs his speech and makes it particularly difficult for him to participate, even when the screen does not freeze.

Across Latin America and the Caribbean, 114 million children are still out of school, more than anywhere else in the world. Some public schools in Colombia’s capital, Bogotá, have resumed in-person teaching. However, in rural regions such as Catatumbo, where Andrés lives, and where it is most needed, most remain closed.

Towns like his are hotspots for coca production – the base ingredient of cocaine – and the conflict between armed groups vying for control of it.

The number of children who have disappeared in the past year has surged as families have been pushed into poverty and have lost the teachers who watched over them, says Save the Children Colombia. Local groups are concerned that they have been recruited into armed groups or are working on coca plantations.

“A lot of kids have dropped out due to financial issues,” says Andrés’s mother, María. “Of his 40 classmates, around 25 still attend.”

Andrés hopes that one day he will be able to use complex mechanics and software to develop robotic limbs to help others with similar physical impairments to his own. “I like technology a lot,” he says.

“We always tell him that he may not be able to walk but that he can do amazing things with his brain,” María says. “And I say: ‘I might not be able give you these things but, if you study, one day you can give what we can’t give you to your children.’”