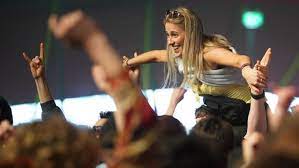 A pilot concert in Liverpool on Sunday saw the largest number of people to have legally crammed into such a small space in the UK since the start of the pandemic. They had a euphoric night – but a lot is riding on its success.

It’s a sight that has existed only in fond, fading memories for the past 13 months, and has sometimes seemed destined to be consigned to the carefree pre-Covid age – 5,000 closely-packed music fans dancing and jumping, and singing in unison at the top of their lungs.

No masks. No social distancing. No rule of six. No risk of fines.

Just having a good time with your mates, drinking beer from cardboard pint pots, queuing up for Portaloos, getting rained on – and listening to live music in a melee of strangers who are hearing, seeing and feeling the same things as you.

Sunday’s mini-festival in Liverpool’s Sefton Park was one of the government’s official trial events to research how large gatherings can safely take place again.

All ticket holders had to take a supervised lateral flow test at one of four testing centres in the city the day before, and were only allowed in if the test was negative.

They were also strongly encouraged to take more sensitive PCR tests on the day of the show and to do so again five days later, on Friday. That will be crucial to working out whether there was any spread of the virus.

It’s all with the aim of working out how summer music festivals can go ahead after 21 June, when stage four of the government reopening roadmap will, in theory, see the end of restrictions on social contact.

When the gates to the Sefton Park site opened at 4:30pm on Sunday, the first fans came in – ripping off their face masks with “a sigh of relief”, as one put it.

At 5.30, before any of the bands had started, an already sizeable crowd was in front of the stage, where a DJ was spinning indie anthems. They weren’t just shoulder to shoulder, but on each other’s shoulders, arms aloft, cardboard pints flying as the chorus to Common People kicked in.

By 6:30, a girl was being sick on the grass next to the Filthy Vegan food van.

In the big top, the first act was on stage – Liverpool singer-songwriter Zuzu. “Hello!” she said, and the stimulation-starved crowd roared as if she had scored the winning goal in the Merseyside derby.

“It was just unreal,” she said of the experience afterwards. “It felt like jumping out of an aeroplane. My heart was going in a big way.

“It was incredibly emotional. I tried to keep it together on stage. But during the last song I choked up, and when I came off stage, I’m not even ashamed to admit that I cried. I fully cried. It was amazing.”

The crowd was even more pumped up by the time the headliners, chart-topping indie band Blossoms, arrived two hours later.

The pilot was supposed to test a “normal” gig, but the amount of pent-up energy that was released, and steam that was let off, meant the atmosphere was more heightened than was ever normal in previous years.

“It was way better than normal,” said one fan, Aneesa Habib, 19, afterwards.

“It was so crazy being back surrounded by people,” said her friend Joby Mathew, 20. “It was incredible. To be in the middle of everyone, just moving around, you feel like you’re part of something bigger than yourself.”

Festivalgoer Jack Young, 21, said being at an event with no restrictions was “like a weight had been lifted off everyone’s shoulders”.

Another called Chloe said: “It was nice to be in the moment. You felt alive again. We need more. I’ve missed it a lot.”

Alex Druce, 26, said it was like having “a flashback to two years ago”. He added: “It was like reverting back to the way things used to be. We’ve basically been like a caged animal for about two years, haven’t we?”

Some concertgoers did admit they had been anxious about being in a crowd again after so long. The testing process largely proved reassuring, and its success will help determine whether we see scenes like this again soon.

Sunday’s six-hour show followed two nightclub pilot events, which were attended by 3,000 people per night in the city on Friday and Saturday.

“We’ve worked really hard to do everything right behind the scenes – all the testing – to create an atmosphere that didn’t feel sterile and didn’t feel as though you were in a test or a pilot show or an experiment,” managing director Melvin Benn said.

“And we’ve created an atmosphere that people will remember from 2019. People will think, this is what they have been missing.”

Some festivals, such as Glastonbury, have already been cancelled for this summer, while others are hanging in the balance. “There’s an awful lot of festivals riding on the success of this,” Benn said.

“That’s huge economically, but it’s huge from an emotional point of view, from a human wellbeing point of view. I’ve seen people break down here with the emotion of seeing people again, and I fear that if we don’t bring that back, that isolation that a lot of people are living through will just become unbearable.”

The fate of the forthcoming festival season does not just hinge on being able to prove that individual events can be safe.

Organisers are also calling on the government to provide insurance in case there’s another Covid spike and festivals have to be cancelled at short notice, after spending large sums on preparations.

“The truth is, unless the government provide it, there’s real vulnerability for the rest of the summer,” Benn said.

He invited arts minister Caroline Dinenage to see the set-up of the Sefton Park pilot for herself. Speaking on site, she said the insurance idea was “still on the table” and was “with the Treasury”, adding: “If we can do it, we’d like to.”

Reading and Leeds, the biggest events left in this summer’s calendar, are sold out. Asked whether they could happen without government insurance, Benn shrugged and gave no comment.

On stage, as Blossoms struck the opening chords of their final song Charlemagne, someone in the crowd lit a flare, more people climbed onto friends’ shoulders, and more arms were raised in the air.

“We’ll see you again soon,” singer Tom Ogden promised as the tune finished, leaving the crowd to file out of the tent, and back to reality.