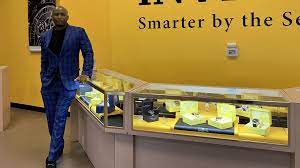 WASHINGTON (Axios): James Mack has been looking for a new location for his successful jewelry store for months. He believes Charlotte has a problem with bringing Black-owned businesses into predominantly white neighborhoods, Axios’ Katie Peralta Soloff writes.

That’s despite the waves of retail closures caused by the pandemic, from long-standing restaurants to breweries to national retail chains.

Mack’s not alone. In March, SouthPark mall terminated the lease of No Grease’s barbershop. The mall walked back the decision after much backlash, but the ordeal provided a window into what many Black small business owners say is their biggest challenge: finding and keeping a space.

Zoom out: That’s one of the biggest complaints Charlotte’s Black Chamber of Commerce Chairwoman Shanté Williams says she receives.

“It always bothers me that there’s this perceived additional risk because you are a person of color running a business,” Williams tells Katie.

Neither Center City Partners nor Charlotte Regional Business Alliance tracks business ownership by demographics, and the lack of data makes it impossible to see if there’s a pattern, as WCNC noted.