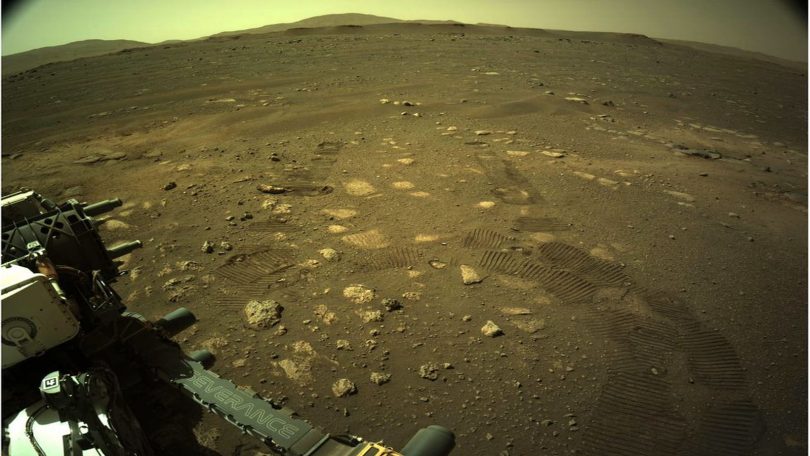 “While the rover is still doing a lot of engineering checkouts, the minute the rover begins to move we can consider ourselves explorers on the surface of Mars,” she told BBC News.

It’s two weeks now since the one-tonne robot made its dramatic descent to the Red Planet.

Engineers have spent the time commissioning the vehicle and its many complex systems, including its instruments and robotic arm.

Everyone, however, has been waiting for Perseverance to start rolling. It happened on Thursday. The robot went forward a short way, spun on the spot 150 degrees, and then backed up a bit.

“You can see the wheel tracks that we left on Mars; I don’t think I’ve ever been happier to see wheel tracks,” said Perseverance mobility engineer Anais Zarifian.

“This is just a huge milestone for the mission and the mobility team. We’ve driven on Earth but driving on Mars – that’s the ultimate goal, and just so many people have worked towards this very moment for years.”

Perseverance was put down in a near-equatorial crater called Jezero, to search for evidence of past life.

This will involve roving some 15km over the coming Martian year (roughly two Earth years).

Scientists want to reach a number of enticing rock formations in the crater that might retain a record of ancient biological activity.

Among these is what looks in satellite imagery to be a delta – a structure built up from the silt and sand dumped by a river as it enters a wider body of water. In Jezero’s case, this wider body was very likely a crater-wide lake that existed billions of years ago.

The mission team is considering two possible routes to the delta, one of which would give scientists a preview by taking the robot past an isolated remnant.

“This (mound) is about a mile-and-a-half away from the rover. You can actually resolve layering within the rocks,” said Dr Stack Morgan.

“In this outcrop, these resistant layered rocks were likely deposited by rivers flowing into the ancient Lake Jezero, and scientists on the team are hard at work trying to understand the significance and origin of rocks like this.”

An immediate goal for Perseverance is its helicopter experiment. The rover brought a small chopper with it from Earth.

The vehicle will spend the next few weeks driving from its present location to a suitable stretch of terrain where the 2kg device called Ingenuity can be put safely on the ground. At present, the aircraft is slung beneath Perseverance’s belly.

Perseverance is the fastest rover Nasa has ever put on Mars. This is not so much because of the rate at which the wheels can turn (about 5cm/s), but rather because of advances in autonomous navigation.

The robot takes pictures to assess the road ahead. Previous vehicles had to stop while these images were processed onboard. Perseverance can do this on the fly.

“Perseverance can walk and chew gum at the same time,” said Anais Zarifian.

Nasa announced on Friday that it had named Perseverance’s landing site in Jezero Crater after the celebrated American science fiction writer Octavia E. Butler. The same honour was given to scifi author Ray Bradbury in 2012. His name will forever be associated with the touchdown location of the US space agency’s previous rover, Curiosity.