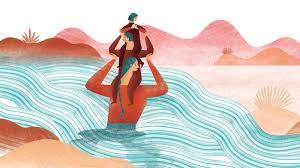 In June 2019, attorney Warren Binford traveled to the U.S. Customs and Border Protection facility in Clint, Texas. She was there on a routine visit to monitor the government’s compliance with the Flores Settlement Agreement, which governs how long and under what conditions migrant children can be held in detention facilities. She ended up interviewing dozens of children over a few days, and gathered stories so shocking — of hungry, cold and sick children sleeping on concrete floors under Mylar blankets — that they became international news.

After that visit, Binford started a nonprofit dedicated to strengthening legal protections for children in custody. On its website, visitors can read sworn testimony from dozens of children and teenagers.

But Binford ran into a problem: She says the children’s stories were just too harrowing to hold an audience.

“People were so depressed. They would call me and say, ‘I can’t do it. I bawl my eyes out. It’s too much.’ And so then it was like, ‘OK. How do we help people to access this knowledge that the children have given us in the children’s own words?’ “

Her solution: a picture book. Hear My Voice/Escucha Mi Voz, published in both English and Spanish, features excerpts of the testimonies, paired with art by award-winning illustrators who are Latinx.

“Having these really fabulous artists come together and illustrate the book helps to create a more accessible point of entry into these children’s lives, and who they are, and why they came to the United States,” Binford says.

One illustration shows a border crossing, with two children riding on a woman’s shoulders across the Rio Grande. “One day in the morning we passed a wire fence with a big sign that said, ‘Welcome to the United States,’” the child narrator says.

“My little sister and I came from Honduras,” reads a page with illustrations of children sleeping in a wire cage. The artist has depicted them with birds’ heads.

Another image shows children behind barbed wire in an eerie desert landscape. The text reads: “One of the guards came in yesterday afternoon and asked us how many stripes were on the flag of the United States. We tried to guess, but when we were wrong, he slammed the door.”

Binford is hoping that Hear My Voice/Escucha Mi Voz will be suitable for families to read and talk about together.

“The children’s book allows it to be a little kinder and gentler accounting of the children,” she explains. “And by creating this mosaic from different declarations [it] helps to give a sense of who these children are collectively.”

Almost 19,000 Migrant Children Stopped At U.S. Border in March, Most Ever In A Month

In March, the number of migrants encountered at the U.S.-Mexico border hit a 15-year high, according to NPR’s reporting. That included nearly 19,000 children and teenagers traveling without a parent — double the levels from February and the most ever in a single month.

She says the purpose is to center the narrative back on the people most directly affected — the children.