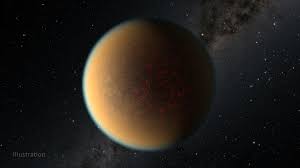 WASHINGTON DC: A planet about 41 light-years from Earth lost one atmosphere but may have developed a new one.

Why it matters: Astronomers are increasingly finding that even distant planets whose features seem easy to explain are actually more complicated than initially expected, hinting at the vast diversity of planets in the universe.

Details: The planet — named GJ 1132 b — was once enveloped in a thick hydrogen atmosphere that was lost to space because of extreme radiation coming from its host star.

But now, according to observations from the Hubble Space Telescope, the planet appears to have lost that thick atmosphere only to develop a new one thanks to volcanic eruptions.

“We first thought that these highly irradiated planets could be pretty boring because we believed that they lost their atmospheres,” Raissa Estrela, an author of a new study about the planet in The Astronomical Journal said in a statement.

“But we looked at existing observations of this planet with Hubble and said, ‘Oh no, there is an atmosphere there.'”

The big picture: GJ 1132 b and Earth have similar densities, ages and sizes, but the two planets are far from twins, according to NASA. The distant planet orbits very close to its relatively small red dwarf star, circling it once every 1.5 Earth days. The world’s new atmosphere is also effectively poison — composed of hydrogen cyanide, methane and other gases.