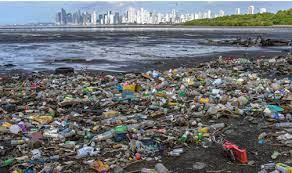 Plastic pollution is one of the primer and alarming issues in developing countries that have vast environmental and human health impacts which need to be addressed as a priority.

Unfortunately limited work has been done on the topic, especially on air and water pollution due to plastics in Pakistan. Most plastic is made from fossil fuels like oil and natural gas, which release toxic emissions when extracted from the earth. Plastic contribution has penetrated into all branches of human activity: everyday utensils to decorations, packing industry, construction and most importantly medical industry.

Excessive use of plastic everywhere, on one hand has brought easy comforts while on the other hand its safe disposal has become a major issue that is leading to dangerous levels of environmental pollution. Soil, land, air, and marine pollution has worsened due to unlimited use of plastic items. Pakistan is also facing health and other hazards being created due to extensive and widespread use of plastics in the country. Irrigations system of Pakistan is one of the largest gravity flow irrigations systems in the world comprising of dams, barrages, head-works, secondary and tertiary canals, and water courses, bridges, siphons, and other hydraulic structures.

Plastic pollution starts from the catchment areas in the mountain ranges due to tourism, local population, agricultural, industrial, and other activities which cause transportation of disposed plastic bags/ bottles etc. into streams/ rivers due to wind or water flow actions.

Plastic pollution is caused by the accumulation of plastic waste in the environment. The word plastic is from the Greek word “plastikos”, meaning ‘ability to be shaped or molded into different forms/ shapes’. It can be categorized in the primary plastics, such as cigarette butts and bottle caps, or secondary plastics, resulting from the degradation of the primary ones. It can also be defined by its size, from micro-plastics – small particles (<5 mm) of plastic dispersed in the environment – to macro-plastics.

Plastic pollution can take different forms including: The accumulation of wastes.    The accumulation of marine litter, fragments, or micro-particles of plastics and non-biodegradable fishing nets, which continue to trap wildlife and waste. Waste causing the death of animals by ingestion of plastic objects. The arrival of micro-plastics and micro-beads of plastics from cosmetic and body care products. Plastics have proliferated into all domains of life. Plastic have gained importance due to ease of handling and molding into various shapes and sizes. The characteristics of plastics can be varied from very soft to very hard retaining high volume to weight ratio. Plastic have contributed even in the construction materials as such and also as composite materials. According to a study, about 8 million tones of plastics are deliberately dumped into the oceans globally. It is shocking to know that the simplest plastic normally used in grocery store bags take over 100 years to collapse, through the complex ones take between 100 and 600 years or even beyond that to decompose. It is estimated that food wrappers and containers produce 31.15% of pollution in the environment.

Plastic bags cause 11.18%  environmental pollution. There are countless environmental threats in Pakistan, from villages to small towns and big cities everywhere on the street corners, in the air, on the seashore, in the fresh water bodies, in the water channels. We find heaps of plastic waste. Such waste has stained what used to be our once beautiful seashore of Karachi. Pakistan has highest percentage of mismanaged plastic in South Asia. Waste management companies can’t solve this complex problem alone as they require extensive advocacy and infrastructure support from both the public and private partners.

The WHO published shocking research in 2018 that exposed the presence of micro-plastics in 90% of bottled water, the test of which revealed only 17 were free of plastics out of 259. We absorb plastic through our clothes, 70% of which are synthetic and worst fabric for the skin. Humans can be exposed to these chemicals through the nose, mouth, or skin. Some of the chemicals used in plastic production can cause dermatitis upon contact with human skin. The shopping bags of 30 micros are thicker; they do not fly with air pressure and are also reusable. However, there is no implementation on these sanctions from the authorities as bags without D2W, are openly used everywhere in Pakistan, including Karachi. Biodegradable plastics (BPs) have become the focus of recent research due to their potential biodegradability and harmlessness, which would be the most effective approach to manage the issue of plastic waste environmental accumulation. BPs can effectively protect and improve the environment, and greatly promote the development of environmental protection. Choose products with less plastic packaging. Try and select items that come in non-plastic recycled and recyclable packaging, to do your best to handle items that can’t be reused properly.