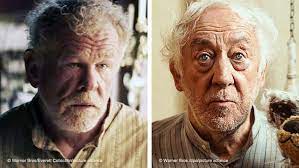 Will Leonardo DiCaprio top Mads Mikkelsen’s performance in a remake of the Oscar-winning “Another Round”? As film history shows, the original is usually the better version — but there are some exceptions.

Going on another round?

It just won the Oscar for best international feature. Now, the Danish film “Another Round” is set to get a US remake, as reported by “Deadline.” Thomas Vinterberg’s dramedy about four friends on an epic drinking binge stars Mads Mikkelsen. Leonardo DiCaprio is slated to take over his role, but there’s no formal deal in place yet. Many other European films were also given the Hollywood treatment.

A quick and successful remake

The US remake of “The Girl with the Dragon Tattoo” (2011), based on the first novel of the “Millennium” trilogy, came out just two years after the Swedish original. Directed by David Fincher, the Hollywood version starred Daniel Craig and Rooney Mara (right). The actress didn’t top Noomi Rapace’s powerful performance as Lisbeth Salander (left), but she did get an Oscar nomination for her role.

The 1960 crime thriller “Purple Noon” was the first film adaptation of the novel “The Talented Mr. Ripley” by Patricia Highsmith. Lauded by critics, it turned Alain Delon (left) into an international star — it was his first major role. A 1999 remake had Matt Damon as the main character, but it was his colleague Jude Law who was nominated for an Oscar and a Golden Globe for his supporting role.

A charming German romantic comedy from 2001, “Mostly Martha” picked up several awards in Europe. But the Hollywood remake from 2007, “No Reservations,” lost the sophistication and flavor of the original. Compared to Martina Gedeck’s nuanced performance in the lead role (left), Catherine Zeta-Jones’ was simply bland.

Erich Kästner’s classic novel from 1949, “Lottie and Lisa,” was adapted at least 14 times for the big screen since the original West German film version (left) came out in 1950. Walt Disney released its first remake, titled “The Parent Trap,” in 1961, and the 1998 remake was Lindsay Lohan’s debut film (right), in which she portrayed both twins.

Three bachelors are completely befuddled when they must take care of a baby — the love child of one of the gentlemen. The original French comedy from 1985, as well as the 1987 Hollywood remake of “Three Men and a Baby” — starring Tom Selleck, Ted Danson and Steve Guttenberg — were both box office hits. The story was subsequently remade in six movies in five languages.

One plot, one director, two films

The Danish filmmaker and screenwriter Ole Bornedal directed the US remake of his own hit thriller, “Nightwatch,” starring Ewan McGregor and Nick Nolte — but reviews for his second version weren’t so enthusiastic. The Hollywood version lacked the low-budget charm of the original. According to McGregor, the studio interfered too much, and “took all the interesting stuff out, making it bland.”

To be fair, it can be said that the Spanish thriller “Open Your Eyes” (1997) is very peculiar. Described by critics as “an odd mixture of science fiction, romance and reality warp,” Tom Cruise produced and starred in a remake entitled “Vanilla Sky” in 2001. Penelope Cruz reprised her role from the original film, and despite bad reviews, it did relatively well at the box office.

Til Schweiger directed a Hollywood remake of his own movie from 2014, “Head Full of Honey.” The German version of the comedy-drama centering on a man with Alzheimer’s disease was the most successful film in German movie theaters the year of its release, while the English-language remake starring Nick Nolte (left) was not only smashed by critics, it was also an absolute flop at the box office.