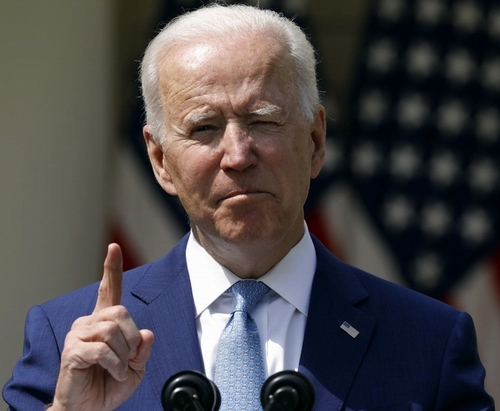 WASHINGTON (thehill): President Biden on Tuesday cut off prolonged infrastructure negotiations with a GOP group led by Sen. Shelley Moore Capito (R-W.Va.) and will instead move forward on discussions with a bipartisan group of senators.

The White House announced Biden’s move after the president and Capito spoke Tuesday afternoon. The two remained far apart on a deal during that discussion despite weeks of talks. The White House as a result is shifting to talks with a bipartisan group that is crafting its own proposal, an administration official confirmed.

Members of the bipartisan group include Sens. Kyrsten Sinema (D-Ariz.), Rob Portman (R-Ohio) and other Senate moderates, such as Sens. Jon Tester (D-Mont.), Bill Cassidy (R-La.), Joe Manchin (D-W.Va.) and Lisa Murkowski (R-Alaska). The senators are aiming to release a proposal by the end of the week.

The president began speaking with members of the bipartisan coalition on Tuesday, and he will engage with those lawmakers while in Europe for the next week. Cabinet officials such as Transportation Secretary Pete Buttigieg and Energy Secretary Jennifer Granholm will also take a leading role, an administration official said.

The end of talks between Biden and Capito marks a significant shift in the months-long effort from the White House to secure Republican buy-in on an infrastructure package. Some progressives, including Sen. Bernie Sanders (I-Vt.), have expressed skepticism the administration would ever win over the 10 GOP votes needed in the Senate to overcome the filibuster.

White House press secretary Jen Psaki said Biden spoke with Senate Majority Leader Charles Schumer (D-N.Y.) on Tuesday about the potential for using the budget reconciliation process to pass parts of Biden’s jobs plan next month. Reconciliation would likely require dropping aspects of Biden’s proposal due to parliamentary rules, but it would only require a simple majority to pass both chambers of Congress.

“The President is committed to moving his economic legislation through Congress this summer, and is pursuing multiple paths to get this done,” Psaki said in a statement.

Biden and Capito have spoken by phone or in person several times since the president unveiled his $2.2 trillion American Jobs Plan in late March. Capito, the top Republican on the Senate Committee on Environment and Public Works, has led a group of GOP senators in talks.

The administration official stressed that Capito participated in negotiations in good faith, and that Biden “has a very positive opinion of her.” The West Virginia Republican would be a welcome member of bipartisan talks moving forward, the official said.

The administration official noted that Biden came down nearly $1 trillion from his original proposal, while the Republican group offered only $330 billion in new investments, a $150 billion increase from when talks started.

The two main sticking points ended up being the GOP group’s refusal to significantly increase the amount of new investments, instead relying on repurposed funding from the COVID-19 economic rescue plan signed into law earlier this year, as well as Republicans’ inability to specify ways to pay for the package. Biden has proposed increasing the corporate tax rate and taxes on the wealthiest Americans, while Republicans have balked at tax increases in general.

“From Day One, the President has been clear that he has two red lines: He will not raise taxes on Americans who make under $400,000, and he will not accept inaction as the outcome,” Psaki said Tuesday.

Capito in a statement said the discussions were always respectful and candid, but she expressed disappointment at Biden’s decision to cut off negotiations. She asserted the president had previously indicated he was amenable to a deal in the neighborhood of $1 trillion, something White House officials have disputed.

“While I appreciate President Biden’s willingness to devote so much time and effort to these negotiations, he ultimately chose not to accept the very robust and targeted infrastructure package, and instead, end our discussions,” Capito said in a statement on Tuesday.

“However, this does not mean bipartisanship isn’t feasible,” Capito added. “The Senate EPW Committee continues to demonstrate bipartisan action on infrastructure. In a one-month period, our committee passed a bipartisan water and wastewater infrastructure bill out of the Senate and passed a surface transportation bill unanimously out of committee. Moving forward, I will continue building on this momentum and working with my colleagues to advance bipartisan solutions like these.”

The White House this week made clear it sees other paths to passing an infrastructure package beyond the talks that were stalling with Capito.

Psaki pointed to the bipartisan talks taking place on Capitol Hill, as well as the individual infrastructure bills making their way through Congress that have overlap with Biden’s American Jobs Plan.