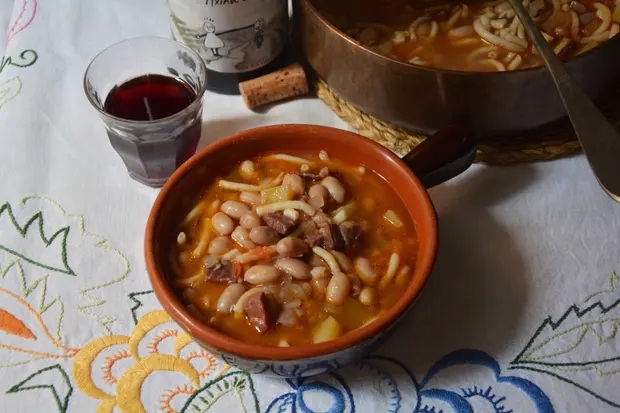 It feels like a tropical greenhouse, or that moment when you get off a plane in a hot country and the warm air clamps itself to your skin and promises not to let go until you go home two weeks later. The smell is a mix of fresh sawdust, ground almonds and talcum. I’ve visited various pasta factories over the years, so both the feeling and the smells are familiar. Although, like walking into a packed pub full of music and the smell of beer, familiarity never dents the thrill; nor does the spectacle of the pasta being extruded. It is the photographer, Jonathan, who asks if we can climb up the narrow ladder in order to look down into the impastatrice, the industrial mixer and kneader where kilos of semola are being combined with water to form an impasto, which is then forced through the many-holed die from which linguine streams like a looming cascade.

The cascade is cut into lengths, which are hung over bars so they look like a heavy, blunt, blond fringe. The bars with fringes swing out for the first stage of the several day-long drying process, before being cut. And this is the important bit, or rather bits. Removed from the bars, the lengths of pasta are rather like tweezers – two long lengths with a short curve or arc. The long lengths are cut into eight 26cm sections of linguine … and the curves? Well, like all curves, they are to be appreciated! At Pastificio Faella in Gragnano, they are called archetti and sold in 5kg bags and absolutely perfect for thick bean soup (and, of course, interchangeable with broken linguine or spaghetti or small tubes).

The justification for yet another pasta and bean soup in this column is that pasta e fagioli is the Bill Murray of foods: ubiquitous, yet always, always welcome. Also, this version has an unexpected ending – one you will doubt right until you taste the cube of potato and arc (or tube or inch) of pasta.

The traditional name for this soup is alla montanara; that is, in the style of someone living in the mountains – hearty, but requiring no climbing, either up mountains or on top of pasta machines. The idea is that you eat the soup at a resting temperature, by which time it is thick and dense. If that doesn’t appeal, you can simply leave it simmering when you add the potatoes and pasta. I like the rest, though. It’s as if the meal is finishing off on its own, and freeing up time to watch Groundhog Day plus a short interval, or to go to the pub.

Put the soaked/fresh beans in a pan with two litres of fresh water, a pinch of salt, the carrot and celery. Bring to a boil, then reduce to a simmer and cook until the beans are tender.

Meanwhile, in a heavy-based pan, warm the olive oil and let the garlic and chilli fry gently to scent the oil. Remove the garlic, add the diced onion and a pinch of salt, and fry gently until the onion is soft. Add the tomato and prosciutto, stir, then add the beans and their liquid and leave to simmer in a lively way for 15 minutes. Turn off the flame, add the potato and pasta, half cover and leave to sit for two hours, by which time the potato will be cooked and all the flavours settled.