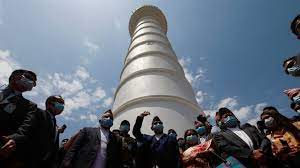 A replica of a tower destroyed six years ago in an earthquake has been inaugurated in the capital of Nepal, Kathmandu.

The original Dharahara Tower was built in the 1830s by Nepal’s first prime minister and was a popular tourist attraction.

The tower collapsed in the earthquake, which had a magnitude of 7.8 and killed more than 9,000 people. More than 50 people died in the destruction of the tower itself, also known as the Bhimsen Tower.

When it was built, the original tower had 18 storeys, reduced to 11 after another earthquake in 1935.

The new structure was officially opened by Prime Minister KP Sharma Oli, a day before the anniversary of the disaster.

The new tower, which stands 72m high (236ft), has 22 storeys. It has a garden, a museum and a fountain, as well as two lifts to make it more accessible.

The tower is shaped like a minaret and offers views across the Kathmandu Valley. However, visitors will have to wait until later in the year to enjoy them, as there will be no access for the public until November.