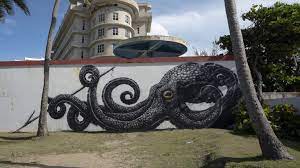 Belgian street artist ROA (previously) has been touring Puerto Rico painting his signature monochromatic menagerie around the island. Depicting both native creatures like parrots and seahorses and invasive species like lionfish, the massive pieces celebrate the region’s biodiversity and the biologists and conservationists working tirelessly to preserve it. Many of the murals are anatomical and juxtapose life and death, a recurring theme in ROA’s body of work and one that’s apparent in his most recent rendering in Isla de Cabras. Spanning 160 feet, the massive artwork positions a plump, wrinkled manatee alongside a lengthy skeleton.

The ongoing project has produced 15 murals so far and is a collaboration with Elegel Group. You can find out more about the impetus behind each animal on Instagram. (via Street Art News)