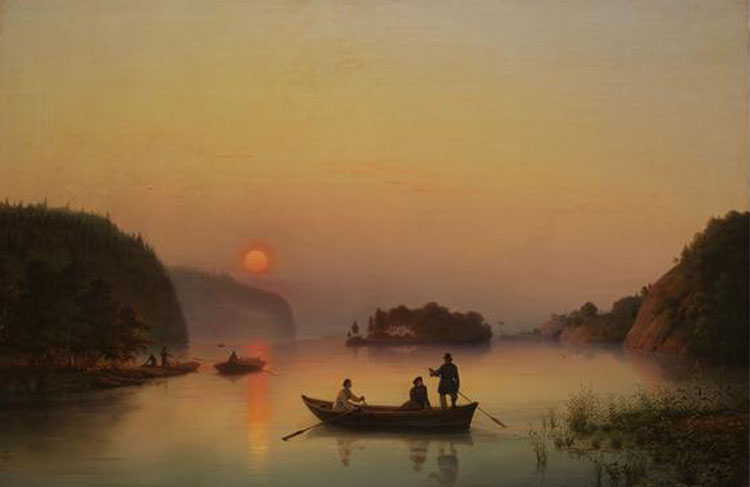 The dramatic landscape painting of a tree struck by lightning is an expression of the artist’s personal tragedy. Russian 19th-century landscape painter Maksim Vorobyov was chronically depressed after the early death of his beloved wife.

One of the Dresden Albertinum museum’s outstanding works is on display in Moscow for the first time. Two men look into the distance, into the cosmos, which also allows them to peer into their inner selves. The different trees are interpreted as a Christian metaphor: Bare trees symbolize death, evergreens stand for eternal life.

Sylvester Shchedrin, ‘The Grotto of Matromania’ (1827)

Sylvester Shchedrin, who was born in St. Petersburg in 1791, is not well known outside Russia. It wasn’t until 1818 — delayed due to the Napoleonic Wars — that the landscape painter finally managed to travel to Italy on a scholarship. Shchedrin stayed there until his death in Sorrento in 1830.

A work by Dresden painter Carl Gustav Carus, who was also a doctor, psychologist and naturalist, is on display in Russia for the first time on a large scale. His painting “Surf at Rügen” inspired generations of Russian and German maritime artists.

Born as a serf in 1818, the Russian painter Anton Ivanov managed to work his way to liberty thanks to his great talent. He added “Goluboy” (the blue one) to his name in Italy to distinguish himself from the numerous other Ivanovs. It was also a way to express his preference for the color blue, in his clothing as well as in his painting.

Adrian Ludwig Richter’s work is an outstanding key image for understanding late Romanticism: inspired by a hike to the Bohemian Elbe Valley, the artist constructed his painting as a metaphor of the “ship of life” drifting with the “current of life.”

Caspar David Friedrich was and remains a cult figure in Russia. “Friedrich is one of those rare people who took on the pain of the century and embodied it in their work and their whole being,” writes Alexander Mikhailov, a Russian Friedrich scholar. The exhibition “Dreams of Freedom: Romanticism in Russia and Germany” runs at the Tretyakov Gallery in Moscow until August 8.