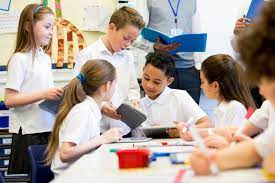 Children who moved from primary to secondary school last September need extra care and attention to prevent a decline in their mental health, according to a leading child psychotherapist.

Emil Jackson, the head of child psychotherapy in the adolescent service at the Tavistock and Portman Trust in north London, said the transition was often disturbing for 11-year-olds, but has had serious consequences for many over the past 12 months.

“Under normal circumstances, ordinary healthy children would be expected to be overwhelmed by starting secondary school,” he said. “Never mind when they haven’t had the chance to leave primary school or to have a proper ending with friends and teachers, when their start to secondary school has been so disrupted.”

Some children moving into secondary schools where they have few, if any, former classmates will have been particularly at risk of isolation because they have not had the opportunity to make friends. “Children have gone into secondary school, who have had relatives who have died or been very seriously ill, and their new classmates have not believed that to be the case – they thought it was just story-telling,” said Jackson, whose work involves regular visits to schools.

While in primary school, most children see one or two teachers during the day who can judge their emotional states, but at secondary school they have to become much more self-reliant very quickly.

“Parents are much less connected or welcome in secondary schools, and all of a sudden children become the exclusive owner of their narrative,” said Jackson. “They have to hold the whole of themselves together, whereas the adults in their life, including their parents, start only to have pieces. And that’s an enormous emotional burden on children.”

Jackson said similar concerns applied to first-year university students, because the greatest number of mental breakdowns happens between the age of 17 and 19, and also for those children moving into primary school from nurseries or between key stages. Jackson’s concerns echo the head of a leading teaching union who warns that teachers must not be left to “pick up the pieces” after the pandemic, as children process the disruption and trauma they have experienced.

In a speech today Patrick Roach, general secretary of the NASUWT, will call for extra help in the classroom to help children cope and allow teachers to focus on teaching.

“Government needs to create the best opportunities that enable teachers to secure children’s learning and development by creating the conditions that let teachers teach, backed by enhanced pastoral support in every school as part of a guaranteed entitlement for every child to access mental health services, timely behaviour support and counselling services in school,” he will say. “Teachers and children didn’t create this crisis and schools shouldn’t be left to pick up the pieces left by this pandemic.”

Many mental health problems, said Jackson, are only beginning to emerge as lockdowns have eased, particularly anxiety, driven by uncertainty and the relentless disruption from dealing with Covid-19.

For teenagers, “intimacy has become dangerous” and children of all ages have seen family trauma caused by the deaths of more than 150,000 people. “Some children are carrying dread that they might have actively contributed to their relatives’ deaths,” he said.

The Tavistock and Portman’s adolescent and young adult service has seen an increase in referrals and requests from schools for support with pastoral care because “they’re completely overwhelmed”.

Schools urgently need resources to help them to deal with the range of issues created by the pandemic, Jackson said.

Discussions in classrooms could play a big role in helping children come to terms with the impact of the pandemic, he said, but schools could not do this alone.

“It’s unreasonable to expect schools or teachers or school leaders to know how to offer all of this support. They need to be given backing, as well as provision directly for parents and children.”