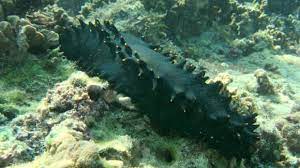 t’s after sunset in Jaffna when Anthony Vigrado dives into the waters of Palk Bay, scanning the seafloor to collect what seems to be prized treasure. What he comes back with are sea cucumbers – long, leathery-skinned creatures that are increasingly valuable and the source of his income for the past 12 years.

But after a 10-hour search, his harvest is only a fraction of what it used to be, as the shores of northern Sri Lanka and southern India have become a prime spot for exploitation.

“Illegal fishermen are coming across our borders and collecting sea cucumbers in places where we dive normally. We are losing our income and our riches to them,” the 31-year-old fisher says.

Sea cucumbers are echinoderms with soft, tubular bodies resembling their namesake vegetable. They are an unusual class of animals but play a vital role in ocean ecosystems. As they feed on the detritus in sediment, they help to recycle nutrients and excrete nitrogen, ammonia, and calcium carbonate, key ingredients for coral reefs. Their feeding also helps to slow the oceans’ acidification from human activity.

Sea cucumbers are in great demand in China and south-east Asian countries, where they are regarded as a culinary delicacy and used in traditional medicines. They are usually eaten in dried form – known as bêche-de-mer or trepang. They are also mistakenly considered to be an aphrodisiac by some, especially in China (as well as their penile shape, they can also stiffen and expel their guts as a defence mechanism).

This has fuelled an incredibly lucrative trade in the endangered animals, one that has grown steadily in recent decades. In the 1980s, sea cucumbers fetched less than £50 a kilo; now prices have risen to more than £200 a kilo, with rarer species valued at more than £2,500 a kilo.

Over the years, Palk Bay and the Gulf of Mannar have witnessed extreme overfishing of sea cucumbers. For the most expensive species, global populations have fallen by more than 60%.

Now the small tropical island is a growing hotspot for illegal smuggling and poaching. Like Vigrado, more than 10,000 fishing families along the northern coasts of Sri Lanka are worried about the state of the fishery.

“Populations are declining due to overfishing. It affects biodiversity, and it also affects the livelihood of the coastal fishers who depend on this activity,” says Chamari Dissanayake, a senior lecturer of zoology at Sri Lanka’s University of Sri Jayewardenepura.

With illegal boats destroying the equipment of local fishers to catch the sea cucumbers, Vigrado says some have killed themselves after being unable to repay loans.

“Their entire investment was being damaged by this,” he says. “These boats do not care about them, and when they cross into our waters, it’s a complete loss for us fishermen.”

AM Stanny Lambert, a 31-year-old freediver from Vankalai in Mannar, says he is saddened and angered by the amount of illegal activity.

It’s unethical and we’re stuck, because they’re collecting everything before we do

“It’s unethical and we’re stuck, because they’re collecting everything before we do,” he says, noting that he and his father have been licensed fishers for sea cucumbers for 11 years, and the family’s sole earners.

Most criminal activity reported takes advantage of differing regulations between the neighbouring countries. While Sri Lanka issues fishing licences and allows exports of sea cucumbers, India has had a total ban on all trade in the animals since 2001.

Illicit sea cucumbers are therefore either caught in India and smuggled into Sri Lanka, where they are exported legally to south-east Asia, or exported from India under false labelling.

Last August, three men were caught smuggling nearly 1,000kg of sea cucumber – valued by the Indian Coast Guard at £500,000 on the international market – from Tamil Nadu in India to Sri Lanka through the Gulf of Mannar, with a similar case last month.

“If you have a legal market in that kind of way in proximity to an illegal market, the legal market becomes a huge source for fish laundering,” saysTeale Phelps Bondaroff, director of research at OceansAsia,whose recent report maps the arrests and seizures of sea cucumbers in the two countries.

For years, authorities in Sri Lanka and India have been trying to combat this marine crime. But despite the number of arrests and seizures on the rise, new cases show the illegal trade is spreading to previously untouched areas.

Now, with the surge in the value of the animals, exploitation is becoming more widespread. Demand for sea cucumbers has led to deadly violence in Mexico, involvement with the yakuza criminal organisations in Japan, and smuggling between the Tanzanian mainland and Zanzibar.

According to OceansAsia, organised sea cucumber crime is spreading further away from Palk Bay and the Gulf of Mannar into the underexploited areas of the Lakshadweep union territory, an archipelago off the south-west coast of India.

In the largest seizure of its kind, a tipoff from local fishers in February 2020 led to authorities finding 1,716 sea cucumbers worth nearly £420,000hidden in coral reefs near Suheli, an uninhabited island.

“Resource depletion could be a major reason why these people are searching for new grounds. Lakshadweep is much more pristine, so that may be the reason why traders are moving there,” says Sajan John, head of policy and marine projects at the Wildlife Trust of India.

Realising the severity of increasing levels of crime around the trade, local authorities have stepped up their response, says John. In February 2020, the world’s first conservation area for sea cucumbers was created in Lakshadweep, anti-poaching bases were set up across the islands, and the Lakshadweep sea cucumber protection taskforce was formed with the help of India’s Central Bureau of Investigation.

But as the bulk of the illicit trade continues to be smuggled into Sri Lanka, Kuppusamy agrees that while stopping the criminal supply chain is crucial, helping those fishers taking sea cucumbers illegally to appreciate the importance of the animals is also crucial to their protection.

“We have to convince them of the ecological role. If there are no sea cucumbers, then you’re endangering the sea,” he said. “That’s when they start to realise their livelihoods and their kids’ future will be affected.

“Breaking that [illegal supply] chain and convincing the fishermen – we have to do both. Otherwise this trade will continuously grow.”