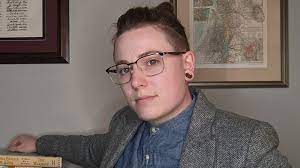 Everyone has their breaking point. And when it comes it can be a small thing, an incident that usually wouldn’t matter.

Shannon Wait’s moment was when her Google-issued water bottle broke. The data centre she worked in was hot, so she asked for another one. However, she says the Google subcontractor refused to give her one.

That moment sparked a chain reaction that led to an announcement last week. Google signed a statement saying the company’s workers had the right to discuss pay and conditions with each other.

It might seem bizarre that even needed to be said.

But in actual fact it was the culmination of Shannon’s battle with the company.

Her story is one of management overreach, a story that shines a light on managerial practices that have become synonymous with Big Tech.

Shannon finished her history degree in 2018 and started working at a Google data centre in South Carolina the following February, earning $15 (£10.90) an hour.

Google’s offices are famed for being creative, alternative and fun – with table tennis tables, free snacks and music rooms. However, what Shannon describes sounds less idyllic.

“People aren’t playing games all day like you see in the movies… the data centre is completely different,” she says.

Shannon was a contractor at Google. That means that although she worked in a Google data centre, she was actually employed by a subcontractor called Modis, part of a group of companies owned by another firm, Adecco.

That complex arrangement has become increasingly common at Google. About half of the people who work for the company are reportedly employed as contractors.

It also makes working out who actually carries the can for managerial mistakes complex. But we’ll get to that later.

Shannon says when the pandemic hit, the work got harder. The minimum number of jobs per shift increased. But there was a sweetener.

“The time came that we were supposed to get that bonus and it never appeared in any of our bank accounts. We started getting concerned like, you know, I really could use this extra money.”

It was around this point that she says employees started talking to each other about the bonus, and how much they were entitled to receive.

“We started asking each other about pay, but any time it came up in front of management we were told not to talk about it.”

Shannon says she was even sent a message by a manager saying: “It is never ok to discuss compensation with your peers”. She shared it with the BBC.

Shannon did eventually receive her bonus, but says she had become disillusioned. She had hoped to get a full-time job at Google. However, she noticed a culture of “perma-temps”, temporary staff who she says would never get made staff, no matter how much they tried.

Frustrated by management, Shannon reached what she says was her breaking point.

She says the same thing happened to her colleague, a full-time Google employee. However, Shannon says although her colleague was given a new bottle, she wasn’t. She went home and typed up a Facebook post.

Eventually, she says she had “had enough”.

“The next day, I was at work, I got called into a conference room with all, for the most, the managers present. And they told me that my Facebook post was in violation of the non-disclosure agreement, and that I was a security risk and needed to hand over my badge and my laptop immediately, and be escorted off site.”

The Alphabet Workers Union was set up in January 2021 for Google workers. It is not recognised by the National Labor Relations Board, an independent government agency, and is sometimes referred to as a “minority union”. The vast majority of Google workers aren’t members, but Shannon was and the union took up her case.

In February, they filed two cases on her behalf under unfair labour practice laws. One that she had been suspended illegally – for talking about supporting a union. The other that her managers had asked her, illegally, not to discuss her wages.