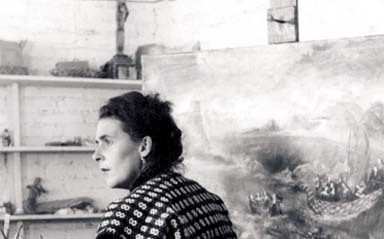 In 1949, seven years after fleeing a warring Europe for Mexico City, the artist and writer Leonora Carrington (1917–2011) read a very curious book. Robert Graves’s White Goddess: A Historical Grammar of Poetic Myth, published a year earlier, was a mythographic account of the ways in which paganism underlies Christian belief. It posited the existence of a moon-affiliated “White Goddess of Birth, Love and Death,” whom patriarchal structures obscure. According to Graves, one could not successfully write poetry without serving this female deity:

“The reason why the hairs stand on end, the eyes water, the throat is constricted, the skin crawls and a shiver runs down the spine when one writes or reads a true poem is that a true poem is necessarily an invocation of the White Goddess, or Muse, the Mother of All Living, the ancient power of fright and lust—the female spider or the queen-bee whose embrace is death.”

Graves’s scholarly methods were suspect, his tone one of reverence and perhaps obsessive conviction, his sentences elaborate, his sources arcane. T.S. Eliot called the book “prodigious, monstrous, stupefying, indescribable,” and Laura Riding, Graves’s former literary collaborator and romantic partner, disliked it very much. Riding felt her own spiritual convictions had been parodied by her ex in what amounted to a “whorish abomination.” Graves seems also to have invented his translations of Celtic poetry, relying on a limited grasp of the language. A series of deductions based on a purported relationship between letters of the Celtic alphabet and certain trees enabled him, he claimed, to uncover divine names hidden in ancient writing. Yet his entirely reasonable overall conclusion—that modern monotheistic religion has effaced other, pluralist systems dedicated to matriarchy and the worship of nature—found resonance with many nonacademic readers, and the book went into multiple editions in 1948, ’52, and ’61. It has since become a classic of Contemporary Paganism.

Carrington, who had previously written a number of short stories in a piquant Surrealist vein—many of them critical of Christianity—took notice. Having absorbed Graves’s fantastical investigation, the British artist went on to write her first and only novel, The Hearing Trumpet, a tale of the apocalyptic upending of an elderly woman’s life. It’s clear The Hearing Trumpet was strongly influenced by Graves’s revisionist mythology: the manuscript, according to Carrington scholar Susan L. Aberth, was completed in 1950. However, it was not published until 1969, in a French translation titled Le Cornet acoustique. In 1974, it appeared simultaneously in the US and the UK, in the original English.

Printed in more than twenty editions and some six languages over the past forty-plus years, Carrington’s story was once again rereleased in January by New York Review Books, with an afterword by Polish novelist and Nobel laureate Olga Tokarczuk. After glowing reviews in the New York Times and the New Yorker by Blake Butler and Merve Emre, respectively, the first printing sold out in a month. This feat, along with recent republications of Carrington’s two other major pieces of literary work—her memoir of detention in a Spanish mental institution during World War II, Down Below (NYRB, 2017), and her collected short stories (Dorothy, A Publishing Project, also 2017)—suggests that her authorial star is yet again on the rise, perhaps due to a renewed interest in the occult among Gen Z and millennial readers. But how should we think of what Emre calls Carrington’s tendency to be continually “reborn,” if never fully domesticated or canonized? Given her status as both a brilliant painter and an enchanting storyteller, might Carrington be more at home—and, therefore, more recognizable as a major artist—in our own increasingly interdisciplinary age? And why did she herself wait nearly two decades to publish her most fully realized literary work?

Butler and Emre both wax enthusiastic about Carrington’s novel. For Butler, it is a discovery: a “mind-flaying masterpiece,” full of humor and rare events that leave the reader “reconfigured.” Emre, already a convert, sees it as a testament to Carrington’s uncanny ability to mate “the artificial to the natural”—a capacity that reflects the perpetual human ambivalence regarding technology and our animal nature. Both reviewers question Carrington’s reputation as the girl who beat the Surrealists at their own game, to paraphrase a bit glibly. She was heralded in Paris by André Breton et al., who prized her beauty and educated wit, as an example of the intersection of femme enfant and femme sorcière, realized in living flesh. Although she had a famed youthful relationship with the artist Max Ernst in the late 1930s and early ’40s, Carrington eventually rejected the role of muse. Still, it was through Surrealism that she found her way to her remarkably expressive painting practice: the endeavor which, in 1938, produced her well-known Self Portrait (Inn of the Dawn Horse), a striking image of the artist consorting with a hyena and rocking horse while clad in an iconic pair of white jodhpurs.

That painting, with its reliance on unmixed colors and psychological oneirism, is a prelude to Carrington’s more lyrical and fantastical mature work, produced in Mexico City after World War II and characterized by delicate application of egg tempera. In Mexico City, Carrington collaborated closely with Spanish-Mexican painter Remedios Varo and photographer Kati Horna. And she set up her living space to accommodate her various roles, as mother to her two sons (by her second husband, photographer Csizi “Chiki” Weisz), keeper of the house, and painter. Carrington’s studio encompassed all these activities: it was kitchen, laboratory, nursery, salon, and study, all rolled into one. In this sense, it expressed Carrington’s changing orientation to imagery, history, and artistic work. Less concerned with the shocking figurative juxtapositions and revelation of unconscious psychological drives so dear to the Breton-led version of Surrealism, Carrington’s Mexican tableaux meditate upon magic and the divine, primarily as these are manifest in an internationalist array of folk traditions. It is in this context that The Hearing Trumpet should be read.

This first-person novel concerns the fate—which we at first take to be unhappy—of a ninety-two-year-old woman named Marian Leatherby who lives in Mexico with her son and his unpleasant English wife. Marian, as she informs us, has a gray beard and limited hearing. Thanks to a timely gift—the titular trumpet—from her friend Carmella, an elderly artisan of cat-fur sweaters, Marian overhears her family plotting to send her to an old folks’ home. But what a place this turns out to be! The residents are ensconced in fantastical cabins (“bizarre dwellings—shaped like a toadstool, a Swiss chalet, an Egyptian mummy, a boot, a lighthouse—impossible and absurd, straight out of a Bosch painting”); the director, Dr. Gambit, is a Gurdjieff-influenced evangelical fixated on aerobics; and there is a murder plot involving toxic chocolates. However, lest Carrington’s tale appear a mere wacky caper watering down Ernst’s own critique of Victorian mores in his 1934 collage novel, Une Semaine de bonté (A Week of Kindness), she quickly leaves the institutional narrative behind. An ice age abruptly threatens all earthly life, even as animals and humans are magically drawn together by the imminent return of the White Goddess, a massive beelike being who demands orgiastic worship via dancing and dining, usually both at once.

The Hearing Trumpet’s nonsense is less surreal than synthetic. What had seemed like a novel becomes, in conclusion, a sort of cyclical prose poem of adoration, not unlike the Celtic works Graves bent to his will in The White Goddess. Carrington seems to allude to the Tuatha Dé Danann deities of Irish legend, with their mother goddess Dana, whom she had heard about as a child from her Irish nurse and read about in James Stephens’s comic quest-narrative The Crock of Gold (1912). Carrington’s novel combines elements of Arthurian legend, Mexican culture, Irish myths, and proto New Age spiritualism, with a glimmer of the spirit of the European fairy tale.

In this sense, The Hearing Trumpet seems particularly at home in the context of other folk-related works of feminist Anglophone fiction published in the 1970s, and one wonders if Carrington was at the vanguard of a sort of zeitgeist. The 1970s saw a number of notable works of fiction and criticism related to fairy tales and folklore, in which these vernacular forms are more or less elaborately reimagined. Most famous among these are Toni Morrison’s novel Song of Solomon (1977) and Angela Carter’s short story collection The Bloody Chamber (1979). (Carter happened to own a first, 1974, edition of The Hearing Trumpet.) Also published during the decade were Bruno Bettelheim’s The Uses of Enchantment: The Meaning and Importance of Fairy Tales (1976), a psychoanalytic reading of fairy tales now thought to be in large part plagiarized from other scholarly works, and Marina Warner’s Alone of All Her Sex: The Myth and the Cult of the Virgin Mary, released the same year. All these works explore the significance of folklore in relation to the formation of personal identity. Unlike Graves, however, their authors have absorbed the lessons of Structuralism and construct their arguments by describing broader social systems, rather than attempting to trace elaborate genealogies back to a singular source of belief.

Although I share some of Butler’s and Emre’s enthusiasm for The Hearing Trumpet, today it feels more dated than Carrington’s earlier short stories; it is less annoyed with the social strictures of Western civilization and more utopian and wondering, and at times this wonder is obtained by way of a celebratory mysticism that can feel a bit forced. What neither recent review mentions is that it is also a tale of the end of the world—which Carrington foretells, ambivalently, as a time when women will at last, and once more, take control of the story.