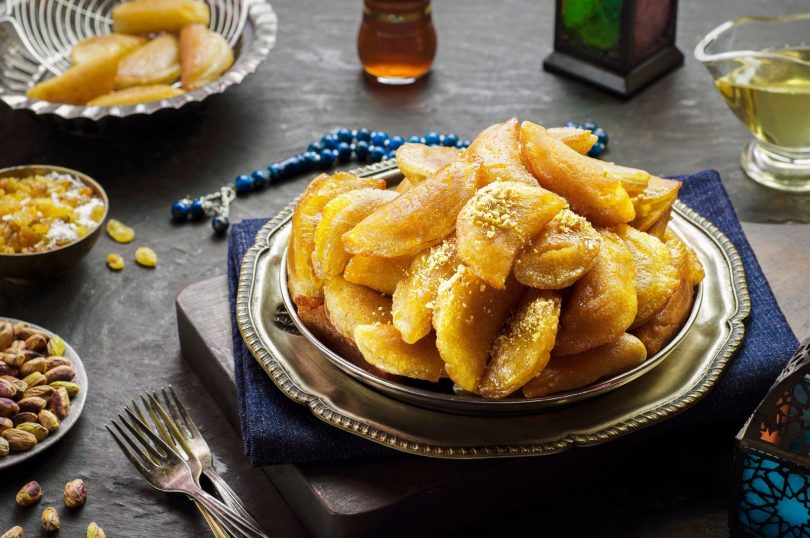 ISTANBUL (Dailysabah): Why not discover yummy treasures from Muslim cultures outside Turkish cuisine before Ramadan ends? Try these four Syrian recipes for a fun and delicious twist

With pandemic measures once again confining us to our homes and Turkey going into a total lockdown, I like the idea of trying something new out to while away the time. And what better way to learn something new than reach out to people you haven’t talked to enough lately? In this case, it was our colleagues from across the Mediterranean.

Daily Sabah Arabic’s Esma Kamil and Issam Chehadat were both so kind enough to share their takes on iftar, and the culinary richness of our Syrian neighbors simply blew me away! Especially with Esma, we ended up chatting and going into detail way too much that I had a hard time choosing only a few dishes. Either way, here are dishes I hope will take you on a little culinary trip in the comfort of your own home.

When talking about iftar menus, we got to talking about soups. After seeing how similar the Syrian recipe for lentil soup was to the Turkish version, I opted for a little appetizer to make it more interesting instead. Loaded with minced beef, these pockets of pastry are like tiny poğaças (but fried and crunchy!), making them a great addition to the dinner table.

salt, pepper and other spices

Put flour, starch, a pinch of salt, 50 mL of oil and 100 mL of water and mix it until you get a decent dough out of it. If it is still crumbling and not coming together, you might want to add a bit more water. Knead for a bit and let the dough rest for about 30 minutes by covering it with a kitchen towel.

For the filling, roast the pine nuts with a tablespoon of oil and set them aside. Chop the onions finely and sautee them with a tablespoon of oil until they have softened. Add the beef and seasoning and cook until the color of the beef has completely changed and it has cooked through completely. Turn off the heat and pour the molasses over the beef and add in the pine nuts. Give that a good mix and let it cool off.

Meanwhile, roll out your dough to about half a centimeter of thickness and cut out round shapes with either a cookie cutter or a glass, fashioning the thin rim as a cutter. Place about a tablespoon of the filling into the dough, fold them in half and press the edges of the dough together. You can reinforce the edges by pressing down with a fork or twisting the edges with your fingers.

Deep fry the filled dough on both sides until it turns golden brown.

When I first saw the name of this dish, as an English speaker, I couldn’t help but chuckle but both of my dear colleagues assured me that this is the quintessential dish of the holy fasting month of Ramadan. And I can see why: it does not require meat (not everyone can afford it after all) yet you cannot deny its nutritional value, which comes from all the beans and chickpeas. Considering that it is rather light, it also won’t be sitting heavily in your stomach either, which is a plus in my book. But Esma did point out that there are regional differences to this dish. Issam for example is from Damascus while Esma is from Aleppo, and tells me that in Syria they say that “Aleppo is the mother of food.”

half a bunch of parsley

If you have uncooked chickpeas and beans, first get that out of the way and set aside. Make sure to let them cool off. Chop the tomatoes into small pieces, finely chop the parsley and garlic and add all the ingredients into a big enough bowl, mixing thoroughly.

Some like to make a tahini sauce for this dish by mixing 2 tablespoons of tahini with 1 tablespoon of lemon juice and 1 tablespoon of water. Whisk that together and drizzle it onto the salad. This makes the whole deal creamier but also a bit heavier.

While both told me that “fool” was a must at iftar tables, Esma said it is almost always paired with the Syrian take on falafels. If we go the traditional way, we might as well go the full mile, right?

a few pieces of cilantro

Add the seasoning, cilantro, onion and garlic into the processor as well and continue blending. Let the mixture rest in the fridge to make it easier to form into a ball later on. Add the baking soda after letting it rest and shape the falafel in the size or shapes you desire, small balls or patties work fine. Fry the falafels for about 2-4 minutes until they are golden. Remove from the oil and let the excess oil drip off on a plate lined with paper towels.

To finish it off: Qatayef

This might sound very similar to the Turkish dessert kadayıf and you are not wrong – from a linguistic perspective – as they come from the same word. Both of these words come from the Arabic word for velvet, which is “qatifah” (kadife in Turkish). The kadayıf we know and love in Turkey initially was like a pancake and then cut into thin strips. However, some culinary genius decided it was time to cook the dough directly in thin strips. I won’t delve into all the etymologic differences but I find it fascinating how the cultures mixed and changed over the centuries.

Put all the dry ingredients into a bowl and give it a mix. In a separate bowl, whisk the wet ingredients together and gradually add them to the dry ones. Once all are incorporated, let it rest in a warm place for about half an hour. Cook the batter on a non-stick pan. For smaller pancakes, you will need about a tablespoon of batter, and for bigger ones up to three. Only cook them on one side until bubbles start to form and keep them there until the bubbles dry out. Remove them from the pan and cover them with a kitchen towel to prevent them from drying out. Once all are cooked, stuff with the nuts of your choice and brush them with a bit of oil. Bake them in the oven at 170 degrees Celsius until they are golden and crispy. Remove them from the oven and dip them (while still hot) in room temperature syrup. If that seems too heavy, you can always drizzle the syrup over them instead of dipping.