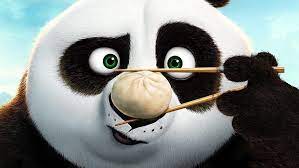 Craving a taste of the mouth-watering dishes featured in our favourite cartoons and animated films? Check out our compilation of dishes and recipes:

Be it from cartoons or animated features, some dishes, drinks and snacks simply look too delectable to stay on screen. Recreate some of these foods frequently featured on television and surprise your kids at dinnertime.

Our stomachs have hurt from laughing at Mr Bean’s childish wit on the telly and ached for the chocolate cake he nabbed from Mrs Wicket’s kitchen. Mrs Wicket makes a mean cake—much like her character. A year ago, a Twitter user recreated the decadent chocolate cake and posted it on her feed for all to crave.

Beignets (Princess and the Frog)

Disney‘s Princess and the Frog showcases the rich culture of New Orleans, including some local specialities, which Princess Tiana evidently knows well. We’re referring to the scene where Tiana serves beignets to her best friend Charlotte and her father.

When Master Shifu serves bowls of dumplings to Po—which turns out to be an intense skill test—most viewers root for Po to win so he gets a bite of the juicy dumplings. We also admit that the scene never fails to make us hungry.

Some speculate that the famous Krabby Patty in Spongebob Squarepants’ world of Bikini Bottom is vegan. While we may never know the secret formula to this iconic cartoon burger, it won’t stop us from cooking one up at home.

Pixar’s Ratatouille is a celebration of French culture and its glorious cuisine. In it, you will see an array of appetising dishes, from the perfect scrambled eggs to Remy’s signature ratatouille, a vegetarian classic. Although it’s impossible to relish Remy’s exact movie meals, we can always look to chefs who make excellent versions of the featured dishes.

Adventure Time is filled with all kinds of eats, from Jake’s bacon pancakes to Prismo’s homemade artisanal pickles, but Jake’s favourite has got to be ‘the perfect sandwich‘—the kind that’s so appetising that it floats and glows. Fans the world over have tried making their version of the sandwich, so now it’s your turn.