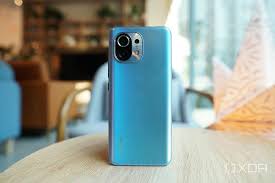 With the Mi 11 Xiaomi, one of China’s largest electronics firms, is attempting to undercut Samsung with a premium, top-spec phone costing significantly less.

Xiaomi may not be well known in the UK, but chances are you may have seen one of its popular electric scooters on city streets across the country. The firm makes a smorgasbord of products from toothbrushes to laptops. Its range is a little more modest in the UK including phones and the aforementioned e-scooters.

It has the same glass-and-metal sandwich design as most smartphones. A big phone with a giant 6.8in screen, the Mi 11 feels slim and easier to hold than some super-sized rivals thanks to a curved back and 196g weight – 31g lighter than the Samsung Galaxy S21 Ultra.

The QHD+ OLED screen is stunning – matching the very best from Samsung – with very high peak brightness, which helps considerably in direct sunlight, and a 120Hz refresh rate (double that of an iPhone) that keeps scrolling super smooth. The screen is covered by the latest, more smash-resistant Gorilla Glass Victus, matching its best rivals.

The Mi 11 is one of the first smartphones available with Qualcomm’s latest Snapdragon 888 chip, plus 8GB of RAM and either 128GB or 256GB of storage, making it one of the most powerful Androids this year.

The phone is therefore snappy and responsive, able to pump out the latest games at maximum frame rates.

Battery life is also reasonable but not class-leading. I got about 32 hours between charges with the screen set to its maximum resolution and refresh rate, meaning it lasts from 7am on day one until 3pm on day two. That included just under five hours of screen-on time in apps, simple games and video, two hours on 5G and about 20 photos. Lighter usage sees closer to 35 hours.

Xiaomi does not provide an estimate of the number of full-charge cycles the battery should last. Batteries in similar devices can typically last for at least 500 cycles while maintaining at least 80% of their original capacity.

The phone is generally repairable by service centres and comes with a 24-month warranty, as well as one free screen repair in the first year. Out-of-warranty repair costs are detailed here for service within the UK including battery replacement. The Mi 11 was only awarded four out of 10 for repairability by specialists iFixit, however.

Xiaomi does not yet offer trade-in or recycling schemes in the UK, but does in Italy, France, Germany and the Netherlands. The company did not comment on the use of recycled materials in the smartphone, nor does it currently publish environmental impact assessments.

Software has been Xiaomi’s Achilles heel in western markets, but the firm’s latest Miui 12 – based on Android 11 – is significantly slicker, more palatable and has fewer pre-installed rubbish apps.

It is heavily modified from the standard Android experience with lots of differences and oddities compared to what you might see from Samsung or Google. But Miui is highly customisable with a plethora of different options that can change it from a more western-style Android to more Asian-style or even make it more like an iPhone.

The settings menus are a bit of a mess with options not where you’d expect to find them while some more advanced features caused a few issues in third-party apps.

It took some getting used to but Miui 12 ends up being a fast, attractive and adaptable experience after tinkering with customisation settings.

Xiaomi will support the Mi 11 with software and security updates for at least three years including two major Android versions.

The back of the phone has three cameras: a main 108MP camera, a 13MP ultra-wide angle and a 5MP macro camera, but no optical zoom.

The main camera is good, capable of shooting detailed photos with a solid dynamic range and accurate colours in good light. Low-light performance is also good, but the camera struggles a little in middling light such as indoors on a cloudy day. Portraits come out well and there are plenty of modes to play with.

The ultra-wide camera is reasonable, but the digital zoom from 2x to 30x isn’t great; fine for simple shots at 2x but no substitute for a real optical zoom beyond that. The “telemacro” camera is an interesting addition, which is essentially a zoomed-in camera that focuses between 3cm and 10cm from the lens. It can be a little hard to get into the right place, but does produce some interesting super-close macro shots in bright light.

The selfie camera is good, producing highly-detailed shots, but be warned that the “beautify” mode is active by default smoothing skin and adjusting everything from eye and chin size to hairline.

Video shot by the main camera is generally good, shooting up to 8K video or 4K at 60 frames per second. The camera app is packed with fun movie effects.

Overall the Mi 11’s camera won’t trouble the market leaders, but is generally pretty good as long as you don’t want a zoom.

The Xiaomi Mi 11 is a great value, top-spec phone that has most of the bells and whistles you could want, while significantly undercutting the competition at just £749.

It is a large phone with a big high-quality screen, good camera, solid battery and the top Android chip for snappy performance. Its simple design is attractive too. But it is not perfect. It has no formal water resistance and the fingerprint scanner can be a bit slow compared with the best.

While Miui is feature-packed and great for those who love to tinker with options, it is less good for those who just want the standard Android experience. Three years of software support is the bare minimum and far behind Samsung’s four-year and Apple’s five-year commitments.