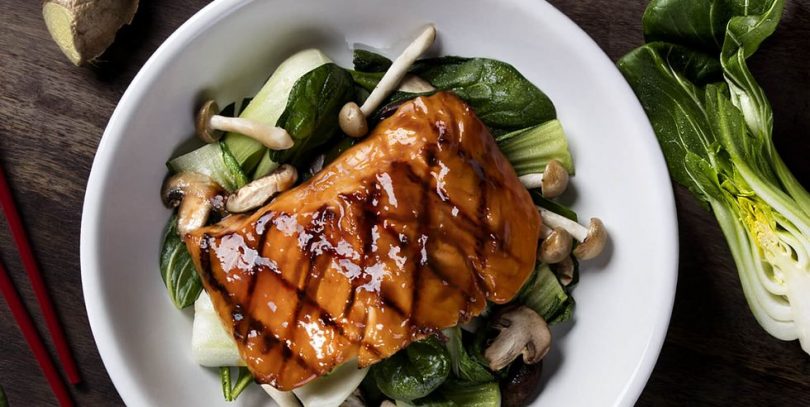 When you’re craving lettuce wraps, Mongolian beef, or dumplings, there’s only one place that hits the spot—P.F. Chang’s. And with more than 200 locations in the U.S., the restaurant has lots of fans.

But if you’re counting your macros, some of the food at P.F. Chang’s can still be on the heavier side, with sodium levels through the roof for some entrees, says Summer Yule, RD. (So be sure to stay hydrated!).

Adrienne Ngai, RD, a registered dietitian based in Canada, points out that P.F. Chang’s serves its own take on several different Asian cuisines. You can find Chinese food on the menu, but they also have options like sushi, ramen, Korean bulgogi, and tempura. If you’re familiar with Chinese cuisine, you’ll also notice that some of the Chinese food items that they do offer have been “Americanized”‘ says Ngai. “For example, mapo tofu on the P.F. Chang’s menu is deep-fried tofu, but typically it is made with unfried, soft tofu,” she says.

Traditional homemade Chinese food doesn’t deep-fry anything very often, adds Ngai. “It is most often prepared by stir-fry, using minimal oil, steaming, boiling, and braising, rather than deep-frying.” She also recommends keeping tabs on how much sauce your dishes are swimming in, since more sauce can result in more sodium, sugar, oil, and ultimately more calories.

That said, when you order, don’t stress about sticking to the “skinny” or “clean” menu, says Meme Inge, RDN. “The most important part of enjoying a meal is to order something you are excited to eat.” But she does recommend choosing “a meal that has at least one serving of vegetables, to help your body feel good from the inside out.”

Still, if you do want to opt for something on the healthier side, here’s what nutritionists would order at P.F. Chang’s.

This is a classic you can’t pass up, and the calories per cup are very low at only 40 calories, says Ngai. It uses minimal ingredients, and its liquid content can help you increase your satiety before you dig into your entree. But Ngai recommends just having one cup of it. “The sodium levels from this appetizer can add up quickly,” she says.

Pro move: Ask this dish to be steamed. Instead of the regular stir-fried method, it’s only 370 calories and is lower in sugar (6g) compared to other entrée dishes, says Ngai. The black bean sauce makes the dish a little high in sodium, but asking for less sauce or sauce on the side might be an option to reduce its salt content.

If you’re looking to add more fish to your diet, this is a solid choice, says Lauren Harris-Pincus, RDN, founder of NutritionStarringYOU.com and author of The Protein-Packed Breakfast Club, because it contains 49 grams of the stuff. Plus, it’s lower in sodium than most other menu items.

The miso glaze will keep your taste buds happy. “It adds tons of flavor to this omega-3 fatty acid-packed fish,” says Inge.

This entree is a winner among nutritionists. “It has a nice balance of vegetables, carbohydrates, and fat,” says Inge. It’s a nutritional powerhouse, too, with nine grams of fiber and 25 grams of protein, which will help keep you full longer.

Be sure to choose the steamed version as opposed to the stir-fried option on the menu. “It improves the nutritional quality of the meal significantly because it’s not battered or fried, which lowers the fat, sodium, and caloric content,” says Katey Davidson, RD. Harris-Pincus also recommends asking for the sauce on the side (so you can manage how much you add) and adding a side of brown rice to round out the meal.

Sure, this sounds like a decadent choice, but Yule says it’s lower in sodium and calories than most of the other menu items, with plenty of fiber. “Between the healthy fats from the avocado, protein from the lobster, and carbs from the rice, this offers a nice balance of macronutrients,” she says.

If you’re craving a salad, Elizabeth Shaw, RDN, recommends the Asian Caesar Salad, with the dressing on the side. She also advises adding salmon or shrimp, “to boost protein and help keep you satiated after the meal, while adding a dose of omega 3-s.”

“The Ginger Chicken with Broccoli is a filling entree with loads of flavor,” says Davidson, thanks to its whopping 57 grams of protein. Plus, it’s pretty low on calories compared to other mains.

“Add a side of brown rice and you have a complete balanced meal of lean protein, whole grains, and veggies,” says Jessica Levinson, RDN, New York-based culinary nutrition expert and author of 52-Week Meal Planner.

“Soup is a great way to begin a meal since it’s filling,” says Harris-Pincus. But stick with a cup. “The bowls of soup are too high in sodium. Cup sizes are lower in calories and moderate in sodium,” she says.

“Lettuce wraps are a great way to keep calories in check. These wraps are only 490 calories,” says Levinson. She recommends ordering the gluten-free version (the sauce on the regular chicken lettuce wraps contains gluten) from the restaurant’s special GF section of the menu. “They’re a nice option because they have a little less sugar and sodium than the regular version,” adds Inge. “Lettuce wraps are a P.F. Chang’s favorite, so you certainly shouldn’t miss out if that’s what you are craving!”

Who doesn’t love dumplings? “Considering most menu items have thousands of calories, this is an excellent choice,” says Davidson. “Dumplings are full of protein, and are considerably lower in sugar, compared to most dishes.”