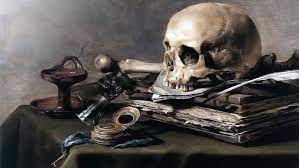 e’ve all heard the phrases “here today, gone tomorrow” and “nothing lasts forever.” They’re sayings that reflect on the fleeting nature of life, reminding us of our mortality. And though most cultures today find a discussion about death to be uncomfortable, this wasn’t always the case.

Throughout history, particularly in times of strife, people were encouraged to ponder death and its meaning. In Medieval Europe, when plagues abounded, a particular philosophy that took hold asked people to meditate on objects that reminded them of life and death. Memento mori, which translates to “remember that you will die,” may seem morbid to some, but was a discipline that was held in high esteem.

This practice asked people to detach from their worldly goods and luxuries. The fleeting nature of these vanity items was juxtaposed with the immortality of the soul and the idea that energy should be put toward the afterlife. Of course, like many philosophies of the time, this translated into rich artistic imagery that is now commonplace.

Artists have long been fascinated by this stoic philosophy, using the somber teachings as a springboard for their art. In fact, skull art, which certainly has its origins in memento mori, continues to be a popular aesthetic niche. Skulls, skeletons, and skulls with wings have all been employed as powerful reminders that we will all leave this earth at some point. Skulls are, in fact, the most commonplace symbol in memento mori art and are the classic symbol of mortality.

Instantly recognizable, they’re also used well beyond Western Europe. Mexico’s Día de los Muertos, or “Day of the Dead,” is one of the most famous celebrations to use skull iconography to pay homage to those who have died. From an art perspective, Albrecht Dürer, Vincent van Gogh, and Pablo Picasso are just some of the artists who use skull imagery to make important artistic statements.

However, skulls aren’t the only symbols used to express memento mori. Throughout the history of Western art, artists used a variety of metaphors to ruminate on life’s fragility. Particularly in the Netherlands, still life painting was used to explore these concepts. Throughout the 16th and 17th centuries, these paintings were often called vanitas (Latin for “vanity”). They used symbols like rotting fruit, musical instruments, watches, hourglasses, and bubbles to show decay and the fleeting nature of life.

Let’s look at examples of the skillful ways that artists across history have used visual cues to provoke reflection about the ephemeral nature of material possessions and the need to focus on the soul.