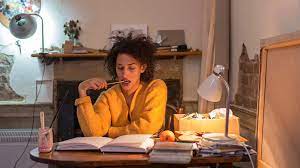 Some people find isolation helps them tackle creative projects, but others find the lack of stimulus leaves inspiration in short supply.

When freelance writer Caroline Topperman moved from Vancouver to Warsaw, in 2013, her creativity flourished. Walking around cobblestone streets with cafés filled her with inspiration. “I’m one of those people that finds [creativity] outside of myself. I really like going to art galleries, reading a book and people watching,” she says.

By the time the pandemic hit, Topperman had moved back to Canada, to a small town outside Toronto. With activities curtailed, Topperman admits she spent the next two months crying. “I really felt that isolation then quite a bit, because I was by myself a lot of the time.” Like many, all of her work moved online, and she struggled with the lack of face-to-face interaction.

One of the assignments she was finishing was writing a piece that described a real-estate development. Before, she’d walk around the property and use visual stimulus for inspiration – something that she couldn’t do during lockdown. She’d also co-founded a writers’ group and was teaching workshops across Ontario – something that she found much harder when the group moved online. “I work a lot better when I can lounge around and hang out with people and be more casual and throw ideas around,” she says.

For many people like Topperman, isolation and a lack of stimulus kill creativity. Yet for others, solitude fuels creative thinking; for every individual who feels stuck in a creative rut during lockdown, there are others who are producing more work than ever.

So, what is it about lockdown that seems to creatively block some people while allowing others to thrive? As restrictions on our activities continue, understanding where and how we can find sources of inspiration could help those who struggle with isolation tap back into their creativity.

We’re fascinated by creativity and it’s a well-studied field, but scientists are still researching the thinking processes that go into a flash of inspiration. Scott Barry Kaufman, a Los Angeles-based psychologist and co-author of Wired To Create: Unraveling the Mysteries of the Creative Mind, has described creativity as a combination of traits and habits that can appear contradictory. For example, two common characteristics that are important are openness to new experiences and the ability to be comfortable with one’s own thoughts, he says.

Sandi Mann, a senior psychology lecturer at the University of Central Lancashire and the author of The Science of Boredom: Why Boredom Is Good, highlights two specific opposing factors as necessary for creativity, stimulus and boredom, and says that people’s response to boredom often determines whether they can harness creativity in times of solitude. Those who typically get their creativity from novelty might be more likely to turn to electronic devices in isolation, because it’s a form of stimulus. As a result, they might find it more difficult to let boredom overtake them, which is what they need to be more creative. “But if you actually let the boredom sit, your mind will wander, you will come up with a little bit more creativity,” she says.

Mann says there’s an optimum load to boredom, however, because too much of it can reduce your energy. Isolation might well have pushed some past that optimal limit, like Dannie-Lu Carr, a leadership trainer, theatre director and singer/songwriter based in Sussex, UK, who has traditionally relied on travel and meeting people at events for her creative inspiration. Pre-pandemic, Carr could be creative by herself; she’d get inspiration from talking to people at events and then refine her ideas during a long, solitary train commute or a flight. But during lockdown, without the burst of stimuli to break up long periods of isolation, Carr found creativity harder to come by. “I think in isolation, it’s a different headspace. When you’re looking for it, you fall short,” she says.

She’s also missing the inspiration that comes from working closely with other people. Before the pandemic, she was recording an album. “I was meeting with my producer, and we were playing around in the studio. And then we suddenly had to work remotely, and I found that so empty.” She’s missed having someone to bounce ideas off. “I think we lost that alchemy that can happen when you’re with somebody in a room.”

I think in isolation, it’s a different headspace. When you’re looking for it, you fall short – Dannie-Lu Carr

Those who achieve their “boredom sweet spot” – as Mann puts it – are better able to harness creativity during long periods of isolation. Katie Ruiz, a 36-year-old artist and prolific traveller, was forced to stay put in her hometown of San Diego when Covid-19 hit. Before the pandemic, Ruiz was constantly on the move, juggling many different obligations – like teaching and nannying – in addition to her art projects. Her busy life gave her plenty of inspiration, but she often couldn’t find the time or mental energy to turn that inspiration into creative work. “I have the tips of ideas often floating in my head, but it takes time and thought to really bring those to life,” she says.

Since the pandemic hit, Ruiz has had an artistically very productive year, creating over 40 paintings and sculptures.  “Honestly, the works I’m creating in the pandemic are things I’ve been thinking about for five years,” she says. “I think I had burned myself out before the pandemic going to every art show and event, so it’s been a nice break.” That said, she is starting to miss some aspects of her pre-pandemic life. “I am definitely ready to see art and friends, and have my social life back.”

For those who are struggling to access their creativity in these strange times, however, it may be worth taking another look at the creative process and even redefining what useful stimulus looks like.

Experts say redefining your creative process – including finding new ways to collaborate – can help get you back on track (Credit: Alamy)

Kaufman, who says he’s been struggling with the lack of face-to-face interaction himself, suspects that one of the reasons why some people might not be able to tap into their creativity is that they are “stuck in the old ways of what their creative process looks like”. He challenges people to expand the meaning of “new experiences”, saying: “Openness to experience doesn’t have to die because you’re stuck at home.” For example, new “inner experiences” such as journaling, mindfulness and meditation, are all accessible; journaling your emotions, Kaufman says, has been shown to help your creativity.

For those whose creative processes have typically involved collaboration, Kaufman suggests joining virtual groups or talking to people whose interests and ideas are different. When you have those conversations regularly, says Kaufman, “creativity is bound to emerge at some point”. Kaufman believes that there are “real opportunities” to unleash creativity if people are willing to “think outside the box”. The key, he says, is accepting that the old way is no longer feasible.

In fact, establishing a new creative process is precisely what got Topperman out of her rut. “One day, it suddenly dawned on me that I majored in film at university because I was a visual person,” she says. “I realised, hey, I’m also good at photography, and I just started looking at pictures on my phone.” Using her travel pictures as prompts, she started writing regularly and ended up reconnecting with an old friend. Together, they decided to turn her writing into a book, with her friend as the editor. She also started walking regularly, getting to know her city on foot. She says seeing ice-carvings, along with local art, helps her keep her mind stimulated and generates new ideas.

For Carr, meanwhile, scheduling long virtual coffee dates with her producer has helped her combat the loneliness and frustration of creating in isolation. Both she and Topperman say the most helpful thing has been letting go of the pressure to create – something that experts and creatives alike agree is crucial to the process. Carr says, “If you let go of the end goal, you’re more likely to get something.”

“The main thing is not to stress out about being creative,” adds Topperman. “The minute I start forcing myself is the moment my brain shuts right off.”Share using Email