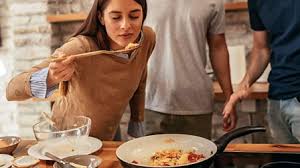 Our breakfast habits have changed over the past year. When the first lockdown hit, we tucked into more breakfast favourites such as bacon and eggs. Later we sought out healthier options, according to a Kantar survey. Now, as more of us return to the office, should we try to hang on to spending more time on breakfast? How much does it matter what we eat in the morning and when we eat it?

Breakfast has become “very, very limited” in the UK, says Tim Spector, Professor of Genetic Epidemiology at King’s College London and author of Spoon-Fed: Why Almost Everything We’ve Been Told About Food is Wrong.

In some cultures, breakfast is often “leftovers or similar to foods you would have for lunch and dinner”, says medical doctor Rupy Aujla. For instance, on the Pakistani breakfast menu you may find “semolina halva, chickpea curry, spiced potatoes, paratha, puri and nihari, a lamb or mutton shank stew”, according to cook Sumayya Usmani. Eggs feature too, with “spiced scrambled eggs called khageena and desi omelette”. In Vietnam, “noodle soups and fried rice are staples”, as well as “Bánh Mì Ốp La”, fried egg in a baguette with meats, pickled vegetables and chilli sauce, says chef Loc Bui.

Eating a healthy breakfast isn’t just about picking one dish that’s packed with plant foods and healthy fats, says Spector. It’s important to vary what you eat over a week, as the more variety there is in your diet the better it is for your gut bacteria, he explains. The British Dietetic Association (BDA) recommends eating foods high in fibre (such as wholegrain bread, oats or select cereals) and protein (such as yoghurt, beans and eggs), and including fruit and veg.

Lockdown gave many the chance to have a later breakfast, with 69 percent eating after 8am, a jump from 50 percent, according to Kantar analyst Katie Spry. But does the time you eat breakfast affect your health? “Some people are programmed to prefer eating earlier in the day and others later, which might suit our unique personal metabolism”, says Professor Spector. “We need to move away from this one-size-fits-all advice”, he continues. Breakfast helps some get going, but others have no interest in eating until noon, and both of these are normal, he explains.

But Spector advises leaving 12-14 hours between your last meal of the day and your first meal the following day, to benefit your gut bacteria. This might mean an early dinner with a morning breakfast, or an evening dinner with breakfast pushed back or skipped. “Our thinking is that it allows a whole repair team to come out that don’t eat your food but eat your gut lining and clean up the debris from the night before. The more they do this, the stronger your gut wall is, and [this] appears to help your immune defences.”

Dr Aujla recommends “If you’re stressed or rushed in the mornings… fasting until noon, where you have a nice left-over meal or high-fibre item, might be better than rushing”. Although leading a healthy lifestyle and eating plenty of fruits and vegetables throughout the day are important, he stresses.

But are there health implication to skipping breakfast? Intermittent fasting or skipping meals doesn’t suit everyone, with reported side effects such as feeling “dizzy, irritable… headaches, and [difficulty] concentrating”, according to the BDA. An observational study suggests people who eat breakfast are likely to be healthier than those who don’t. But they are also found to be likely to smoke more, drink more alcohol and exercise less, so it is difficult to identify cause and effect.

Almost a third of us choose cereal for breakfast, according to a new survey. “Cereal can form part of a healthy, balanced diet”, report to the NHS, but they advise you check nutrition labels for levels of sugar, fat or salt. Choose a cereal with plenty of fibre – an important nutrient 90 percent of us don’t get enough of. Compare nutrition based on 100g of cereal rather than the recommended portion size, as this varies and surveys show we eat 63 percent more cereal than the recommendation.

Cereal can be a good source of calcium when eaten with milk, no-added sugar yoghurt, or fortified soya or oat drinks. Adding fruit increases sweetness, contributes to your five-a-day and boosts the fibre content. Try porridge and homemade granola. But beware of cereal bars, which can be high in sugar and fat – find out how to make your own healthier cereal bars here.

Toast is the second most popular breakfast. Use wholemeal, multigrain or seeded bread, which often contains “dietary fibre, calcium, iron, folate and B vitamins”, says dietician Catherine Rabess. Thanks to that fibre, it keeps you fuller for longer too. Check the label for salt and sugar content. Healthy toppings include nut and seed butters, cheese, eggs, avocado, mushrooms, yeast extract and fresh fruit, says Rabess. Find recipes for good things on toast on BBC Food.

What about fry-ups, ranked by over a quarter of Brits as their all-time favourite breakfast? “Cooked breakfasts can be balanced and healthy”, says Rabess. A breakfast of tomatoes, mushrooms, baked beans and a glass of juice can give you four of your five-a-day, if you have a portion of each. Eggs are also nutritious. The NHS recommends choosing meats lower in saturated fat, such as chicken.Healthy filling breakfasts

What about a glass of juice?

The NHS says a 150ml glass of unsweetened fruit juice or smoothie “counts as a maximum of one portion of your recommended five daily portions of fruit and vegetables”. No matter how much you drink it will still only count as one portion, because it’s not recommended you have more than this.

Dr Aujla doesn’t advise we drink it at all, though. “Fruit juice is basically as sugary as a typical candy bar”, he said, as “you take out all the fibre and leave all the natural sugars, which go straight to your liver”. He is on the fence as to whether vegetable juice is beneficial, but would “much rather people have the fibre and the whole food”.

If you do drink smoothies and juice, dental hygienist Anna Middleton recommends using an (environmentally friendly) straw to bypass your teeth, as the drinks contain sugars and acids, which contribute to irreversible enamel erosion and potentially tooth decay. “It is not the amount of sugar or acid you have”, she says, “but the frequency with which you have it that causes dental problems”. She also recommends washing your mouth out with water after drinking a juice or smoothie, but says you should not brush your teeth after eating or drinking anything acidic such as fruit.

“Water is a healthy and cheap choice for quenching your thirst at any time. It has no calories and contains no sugars that can damage teeth”, recommends the NHS.