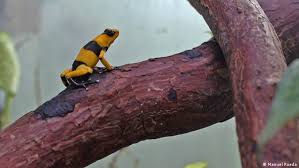 In one of the world’s most biodiverse countries, thousands of animals fall victim to poaching each year. Inside Ivan Lozano’s secluded facility there are dozens of neatly stacked glass cases, glowing with ultraviolet light and filled with vegetation. These terrariums provide homes for some of Colombia‘s most endangered frogs.

It’s from this small farm near Bogota that Lozano is trying to undermine the wildlife traffickers plundering the country’s forests.

“In Colombia we have species of frogs that have been taken from the wild in such large quantities that they’ve almost become extinct,” he said.

Lozano, obsessed with animals since he was a little boy, studied wildlife management in the UK, before deciding to focus on conservation closer to home. In 2006 he founded Tesoros de Colombia (Treasures of Colombia), a project trying to prevent the extinction of species made vulnerable by poaching.

His company has government permits to breed and export seven types of endangered amphibians, including the black and yellow striped Lehmann’s poison frog and the golden poison frog, coveted by collectors around the world. He can breed a few thousands frogs each year, selling them for between $30 (€25) and $500 (€411), depending on species and age.

His customers include private collectors in the United States, Holland and Indonesia who like to keep frogs at home, as well as organizations like German-based Frogs and Friends that are trying to set up captive breeding programs of their own.

“We are helping authorities to fight animal trafficking by giving buyers an alternative to get absolutely legal, healthy and captive-bred frogs,” Lozano said.

Lozano believes captive breeding projects are an increasingly important way to fight animal trafficking around the world, an industry some estimates say is worth$19 billion (17 billion euros)  each year. It is the world’s fourth biggest illegal international trade after narcotics, counterfeiting and human trafficking.

“Just banning the animal trade is not working,” Lozano said. “While there is a demand for these animals, and someone out there willing to pay, people will find a way to get them.”

Colombia, where law enforcement is weak in large parts of the country, has struggled to stop traffickers. According to police figures  more than 19,000 wild animals were confiscated in the country from poachers in 2020.

Despite a poaching ban, thousands of frogs are taken from forests along Colombia’s pacific coast annually by traffickers who pay farmers as little as $2 (€1.6) to capture each animal. In recent years, hundreds of frogs bound for European destinations have been confiscated by police at Bogota’s international airport.

But captive breeding schemes are not always successful.

Laura Tensen, a South African zoologist who researched dozens of projects around the world, found they often failed to put poachers out of business.

In Vietnam, breeders of turtles, porcupines and snakes discovered consumers were willing to pay more for wild-caught meat, considered to be tastier. Studies conducted in China revealed that users of tiger and bear products believed medicines made from wild animals were superior to those derived from their captive-bred counterparts, and had a greater “spiritual value.”

Yet Tensen also points to successful examples of captive breeding — such as of mink and silver fox breeding for the fur industry in the US and Canada — as proof they are not doomed to fail. The key, she argues, is in marketing the products effectively and making the process cost-efficient.

To prevent laundering, Lozano says he assigns serial numbers and photo identification to each frog. This information is registered on a database that is shared with customs officers in Europe and the US.

Lozano also teaches his customers how to breed their own frogs, by sharing free online material and advice with them. As he sees it, the more captive bred species on the global market, the lower the costs and therefore the less attractive poaching wild animals is as a business model.

Julio Rodriguez, a frog enthusiast in New York City, says he buys frogs from Lozano and another farm in Ecuador because it ensures quality.

“When you get a smuggled animal, you don’t know how old it is, or what kind of diseases it had,” said Rodriguez.

With Lozano’s guidance, Rodriguez bred 200 golden poison frogs last year and sold them to wholesalers in the US for $30 (€25) each. A decade ago, the same frogs would have cost more than $100 (€82), according to Rodriguez and Lozano.

But competition with traffickers can be tough. For example, Lozano sells the Lehmann’s poison frog for around $400 (€337) a piece, because it is difficult and expensive to breed. But poachers can get them for a few euros from the wild.

Mileidy Betancourth, a frog specialist at the University of Los Andes in Bogota, estimates that 80,000 of these frogs — known for their yellow and black stripes — were taken from a mountain range along Colombia’s pacific coast between 1977 and 2009.

The frog has been saved from extinction, Betancourth explains, not through captive breeding but because one of its last remaining habitats is in a nature reserve around a dam that is heavily patrolled by a hydroelectric company.

The low prices — between $2 and $5 per frog — locals will capture frogs for, point to the broader issue of a lack of economic opportunities.

Betancourth says trafficking will continue if poverty and a weak government presence pervade around the animals’ habitats.

“Captive breeding is a way to stop trafficking,” she said. “But I’m not sure it’s the only solution, or the ultimate solution.”

Lozano’s project has been a challenging journey so far. He’s still paying back debts acquired while trying for five years to obtain government permits.

And last year an environmental agency in Colombia’s Risaralda Province filed a lawsuit claiming his new permits, which allow him to capture 20 individual animals of certain frog and bird species, threatened ecotourism in the area — something Lozano disputes. His company made a statement in October saying it would not use its permits to capture birds until an agreement with the agency and local communities could be reached.

Yet Lozano says he’s not deterred by the difficulties or the critiques of captive breeding projects. He believes they still have value given the many species still coveted by poachers and the importance of what is at stake: Colombia‘s rich flora and fauna. The country ranks among the most biodiverse places in the world.

One day he hopes to use profits to fund conservation projects to preserve those still in the wild.

“This kind of project requires a lot of passion,” Lozano said. “There are always lots of obstacles.”