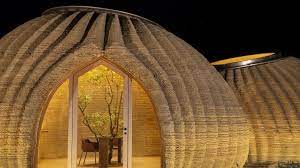 Last summer, The New York Times Magazine published a series of articles declaring that climate migration—a global exodus that’s predicted to displace between 50 and 300 million people worldwide—has begun. As more regions surrounding the equator become uninhabitable due to rising temperatures, crop losses, and disasters, entire populations will be forced to relocate to regions with more stable environments and economies. This impending movement coupled with an ongoing lack of affordable housing has sparked a wave of conversation about how best to remedy the looming crisis.

As a partial antidote, a Bologna-based studio, Mario Cucinella Architects, teamed up with the 3D-printing company WASP to design a low-carbon home that’s easily and quickly reproduced. Called “Tecla,” the prototype is a pair of sloping domes that can be built in only 200 hours using an average of six kilowatt-hours of energy. It’s made of 350 layers of coiled clay, which is sourced from a nearby river, that serves as thermal insulation for the earthen structure complete with a living area, kitchen, and sleeping quarters. Two skylights embedded in the roof of the 4.2-meter-tall domes allow light to enter the 60-square-meter space.

A short video from WASP documents the construction technique in Massa Lombarda, which involves two synchronized printing arms that glide back and forth to layer the walls. Producing almost no waste, the process is adaptable to other raw materials, making it a viable option for housing beyond the Italian region.

Find a larger collection of Mario Cucinella Architects’ and WASP’s climate-focused projects and looks into their processes on Instagram. You also might enjoy this 3D-printed home by Rael San Fratello. (via Dezeen)