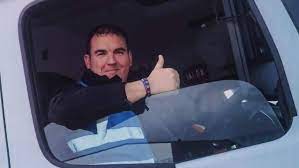 “Last week, I put 73 hours in. You’re not getting home through the week,” Craig Hoodless says of his job behind the wheel of a truck.

“After a full day’s driving you’re mentally knackered but physically fine. Being a long-distance driver has to be a job you love. You can’t do this job if you don’t like it.”

Mr Hoodless, based in Cumbria in north-west England, is one of the more than 300,000 people employed driving heavy goods vehicles (HGVs) in the UK, and one of millions who do so around the globe.

The job, he says, can be long and exhausting – but rewarding at the same time.

“One day is never the same as the next, every day is different,” he says of more than two decades behind the wheel of a truck.

“It’s good money for what you do, but you’re away from home all week.”

The industry, however, may be on the cusp of a seismic change. Nearly a dozen companies around the world are working on developing autonomous trucking – in which a variety of sensors feed data to a computer that controls the vehicle.

Many have reported significant progress. California-based self-driving truck firm TuSimple, for example, is already conducting tests in Arizona and New Mexico that include depot-to-depot delivery runs – completely automated but supervised by a human.

According to data from Acumen Research and Consulting, the semi and fully autonomous truck market is expected to reach approximately $88bn (£64bn; €74bn) by 2027, growing at a compound annual growth rate of 10.1% between 2020 and 2027.

The technology, experts say, has the potential to revolutionise the $700bn (£500bn; €590bn) a year trucking industry that touches every corner of the global economy – creating new business opportunities and saving companies millions.

“It’s a huge opportunity. The biggest impact ATs (autonomous trucks) will have is cost savings and efficiency,” says Patrick Penfield, a professor of supply chain practice at Syracuse University in the US.

“The nice thing about ATs is that they’ll be able to operate 24 hours a day and drive a consistent mileage rate, making trucks safer and more fuel efficient.

“Freight will arrive at a destination faster. A human truck driver usually takes five days to go from New York to Los Angeles. It’ll take an AT 48 hours.”

However, the potential benefits of autonomous trucks have led to concerns about job displacement among millions of truck drivers.

In the US alone, the American Trucking Association estimates there are more than 3.5 million truck drivers on the roads, with nearly 8 million people employed across the wider industry. Census Bureau statistics show that trucking is the most common job in 29 US states, ahead of farming, teaching and secretarial positions.

Among the companies working to make autonomous trucking a reality is California-based Waymo, a subsidiary of Google parent company Alphabet.

The company – which is already testing autonomous technology in the American Southwest – has also announced a partnership with Mercedes-Benz parent firm Daimler to deploy fully driverless trucks.

John Verdon, Waymo’s business development and partnerships lead, acknowledges that while changes to the industry and jobs could take place “over time”, the technology will also help address some of the industry’s current shortcomings.

“One of the strains in the industry is a driver shortage. The technology can help narrow the 60,000 shortfall of drivers we have in the US – a gap that’s projected to widen to 160,000 within the decade,” he says. “We’re optimistic that this technology will spawn many new jobs and businesses, some that have yet to be imagined.”

Raj Venkatesan, a professor of business administration from the University of Virginia Darden School of Business, says that the potential for job displacement in the trucking industry is largely misunderstood.

For the foreseeable future, he explains, even autonomous trucks will still have “drivers” in the cab as a safety measure, to be on hand in case of mechanical problems or even speak to police in the event of an incident on the highway.

“It’s not clear at all now whether there will even be displacement,” he says. “You need the back-up driver. Within the next five or 10 years, it seems reasonable to expect some movement towards autonomy, but with a co-pilot. In my view, it’s like a long-haul flight. The plane can be put on autopilot, but you still have the pilot.”

For most trucking and logistics businesses, many of which have operated for decades, a more pressing concern may be rethinking their operations to meet the demands of an increasingly high-tech sector.

“The industry is challenged with a complete redefinition,” says Christian Tang-Jesperson, a partner at venture capital firm ACME Capital, which has made a number of investments in autonomous vehicle technology-focused firms.

When autonomous trucks come into use, more investment will be needed to track those trucks and map and optimise their routes, he says.

Syracuse University’s Prof Penfield says the potential of the autonomous trucking segment is likely to attract the attention of large corporations, which in turn will lead to greater adoption.

“How this technology will get adopted faster is when big companies like Amazon, Walmart and Costco start to use it in their operations,” he says. “That’s when things will start to break loose and you’ll start to see the growth.”

“It won’t be a flip of a switch,” Waymo’s John Verdon says. “It will be a gradual introduction driven by safety and tech readiness, versus an arbitrary, specific point in time. From our standpoint, it’s really about getting to a place where we can repeat that safe, capable, consistent performance at scale.”

Many drivers, however, remain unconvinced – including Craig Hoodless in the UK, who says that the country’s roads mean that a human will always be needed.

“I’m not concerned. No, not at all,” he says. “I can understand driverless trucks on highways that are long-distance, straight lines. But we don’t have that here.”

“I just delivered to a builder,” he adds. “There’s no way a driverless truck could be able to manoeuvre in and around pallets, bricks and piles of stuff. I don’t see it working.”