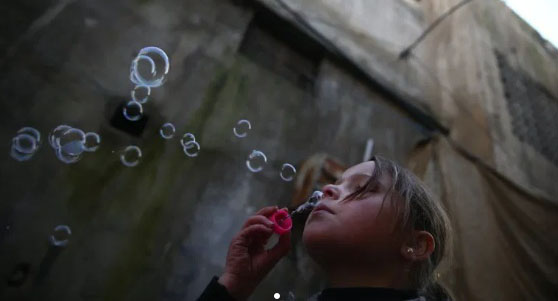 Ten years ago this week, Syrian government forces opened fire on protesters, setting off a bloody civil war. Since March 2011, the civil war has claimed hundreds of thousands of lives and displaced more than 10 million people.

In the early days of the uprising, Bassam Khabieh, then an amateur photographer, picked up his camera — his phone at the time — and began documenting what would be years of urban warfare from his hometown of Douma, a rebel holdout.

May 12, 2012: Barzah, Damascus — Mourners gather in a cemetery to pray for those killed in protests against the Syrian government.Bassam Khabieh

Over the course of the war, Khabieh’s camera lens has often focused on children — many who have known only fighting their whole lives.

Sept. 16, 2017: Douma — Students enter a damaged classroom on the first day of school. In this area, the start of school was postponed due to large-scale aerial bombardment. A number of parents and communities have created battlefield and underground schools in the hopes of preventing a generation of Syrians from growing up without education.Bassam Khabieh/Reuters

Amid the tremendous suffering in his photos, there is also resilience. In his forthcoming photo book, Witnesses to War: The Children of Syria, he captures kids growing up under tenuous conditions as families grip whatever moments of normalcy that they can. Children are seen playing between violent attacks, studying in bombed out schools, having dinner surrounded by rubble.

April 7, 2017: Ain Tarma — Abu Malek, one of the survivors of a chemical attack that took place in this location in 2013, uses his crutches to walk along a deserted street.Bassam Khabieh/Reuters

The cover of the book, a photo of a girl blowing bubbles, is one glimpse at daily life, Khabieh said, that “tells us about a lot of stories.”Article continues after sponsor message

The child was standing in the middle of the wreckage in a destroyed neighborhood when she started blowing bubbles toward the sky — the same sky where an airplane had just dropped missiles, he said.

“This is the message that the life is continuing and even this brutal war will not deter the children from continuing their life.”

In eastern Ghouta, he said, locals who once took shelter as war planes flew overhead have grown accustomed to the terror.

“After one or two years, I start to notice that people don’t care anymore,” he said. “If there is an air strike in their neighborhood, they just start cleaning the debris and opening their shop and continue their life because this is what they want to do — they want to live, you know.”

Jan. 7, 2014: Douma: A baby discovered in the rubble after an airstrike is lifted in the air.Bassam Khabieh/Reuters

Khabieh, who worked as a computer engineer before taking up photography full-time, said he never imagined covering the chilling events that he and his camera have witnessed over the years.

In 2013, a photo he took of the deadly aftermath of a chemical attack on civilians, seen on the front page of The New York Times, shocked the world. It showed a row of children and adult victims wrapped in white shrouds.

He vividly recalled how difficult it was to be there, next to the still bodies.

“There was a lot of pain on their faces,” he said. “We journalists, we want to tell the story, but we, at the same time, we need also to help people because it was overwhelming,” he said.

It’s just one of many grave moments Khabieh has encountered in his career.

Syrian authorities have used Khabieh’s images to track people who have participated in opposition movements, he said, which is why he has been vigilant about how he frames many of his subjects so as not to risk exposing their identities.

In a photo he took in 2012 of mourners gathering to pray for protesters killed by the Syrian regime, no faces are shown. Their silhouettes are backed by an intense blue sky.

Oct. 4, 2014: Douma — A boy sits on a tire in front of a mosque’s bullet-riddled facade on the first day of the Eid al-Adha holiday.Bassam Khabieh/Reuters

Alia Malek, a Syrian-American journalist and author of The Home That Was Our Country: A Memoir of Syria, wrote the book’s introduction and interviewed Khabieh to bring out the stories behind his photos.

If the photos serve as a form of witness accounts, she said — a sentiment reflected in the book’s title — she hopes that their work inspires action toward a better future.

“The photographs can serve as a kind of testament, or witness statements, witness photographs, if there’s going to be any kind of accountability processes that we might be able to hope for in the future,” Malek said.

“So while it might not have been able to save those children’s lives or to have changed what the nature of their childhood was like, there might be a possibility for justice in the future.”

March 19, 2018: Douma — A man hugs his child before the boy is evacuated during a break in the bombing campaign. The fighting between the government and the rebels holding Eastern Ghouta forced many men to separate from their children and families.Bassam Khabieh/Reuters

Khabieh moved from Syria to Turkey in 2018. He took a break from working in the field and became a photo editor, as he thinks about a next chapter in his career.

In Turkey, he plans to pick his camera back up soon to document the Syrian community there.

“In Turkey, we have 4 million refugees,” he said. “So there is, I think, 4 million stories to tell.”