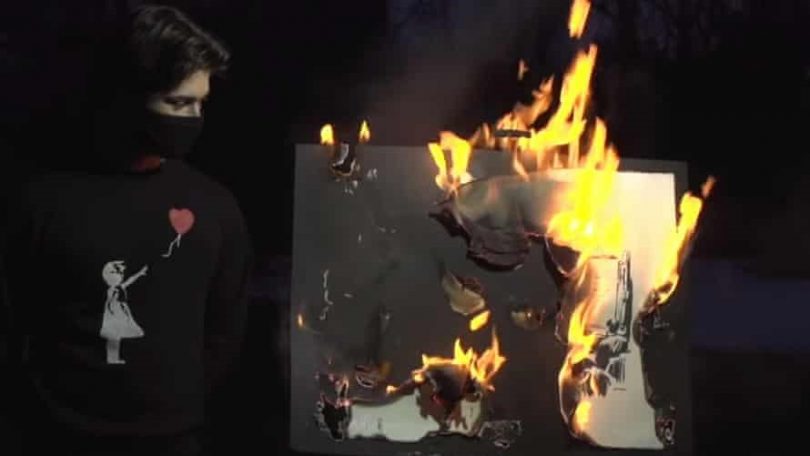 Last week masked men set fire to a Banksy screenprint called Morons (White) at a secret location in Brooklyn, livestreaming the destruction via the Twitter account @BurntBanksy. The men worked for a company called Injective Protocol, which bought the print for $95,000 in order to destroy it and replace it with a unique digital facsimile. This is called crypto art and, if you want to know the extent to which it’s booming, well, the new work just went for $382,336, more than four times the original price.

From Ai Weiwei smashing a 2,000-year-old vase to the Chapman brothers defacing Goya prints, artists are no strangers to creative destruction. But this is different. The burning of Morons (White) is thought to be the first time a physical artwork has been replaced by a unique digital asset. “We view this burning event as an expression of art itself,” Injective Protocol executive Mirza Uddin said. “We specifically chose a Banksy piece since he has previously shredded one of his own artworks at an auction.”

But who would pay a fortune for something intangible – a meme, a piece of video art or a digital rendering of a print – when you can just as easily see it free online? The answer is a lot of people, among them art collectors as well as speculators out to make a fast buck. Last month, the musician and artist Grimes made $6m in 20 minutes by selling, as one headline put it, “art that doesn’t exist” in a Twitter auction. Actually, the art does exist, just not in the boring old real world. WarNymph Collection Vol 1 consists of 10 works, mostly short video pieces Grimes made with her brother.

“What we’re witnessing is a tipping point for digital art,” says Rob Anders, CEO of Niio, a streaming platform that hosts more than 15,000 digital artworks. Behind him, as we chat via Zoom, is his video-conferencing backdrop: a huge screen that’s currently showing No Longer Dead by Jonathan Monaghan, in which a unicorn prances through a surreal landscape. The pandemic, says Anders, has helped. We’re stuck inside, gazing at our screens, which is just the place where digital art can be seen. And this is also the place where, thanks to the cryptographic innovations that made the digital currency bitcoin possible, it is increasingly being bought and sold.

The Edinburgh-based painter Trevor Jones recently raised more than $3.2m by selling 4,157 digital editions of his Bitcoin Angel, in an online auction that was all over in seven minutes. What did buyers get for their money? “People are buying a token that, in an abstract way, represents ownership of a digital image,” Jones explained. “So this is really the first time in history that artists can create and monetise digital images, like a Jpeg.”

Actually, “token” may be too concrete a term for what is simply a purchase entered on an online ledger. And there is another possibility here: that people with more money than sense are going to get burned. If so, they would resemble the very collectors Banksy is indicting in his Morons picture, in which a lavishly framed painting up for auction bears the words: “I can’t believe you morons actually buy this shit.”

Jones demurs. He thinks the market in intangible crypto-art has a bright future. He tweeted recently: “I’ll say this just once and then I’m done. Don’t sell your #BitcoinAngel open edition. If you sell now, you just don’t get it. You don’t see the future. Hold for 6 months & thank me later. Feel free to save this tweet.” Fair point. But he would say that, wouldn’t he?

Let’s curb our scepticism. After all, old-school art auctioneers also see value in this new market. This week, Christie’s will have its first auction of a purely digital artwork, a vast collage by the artist Beeple (real name Mike Winkelmann) called Everydays: The First 5000 Days. Beeple started making this piece on 1 May 2007, drawing a new work and posting it on Instagram every day for the next 13 and a half years. His creation was described by one journalist as “like a political sketch cartoon set in a dystopian video game”.

Everydays will go under the hammer on Thursday. (Do online auctions even have hammers? It seems unlikely.) Winkelmann told the New York Times: “The traditional art world is like, ‘Who’s this kid?’ But I also have 1.8 million followers on Instagram. The Christie’s thing brings a level of validation.” The fine art world, he says, “is finally starting to recognise digital artists”.

Beeple has already made a fortune for one collector. Miami-based Pablo Rodriguez-Fraile bought another work for almost $67,000 in October. The 10-second video clip depicted what looked like the naked corpse of Donald Trump tattooed with slogans and the word “Loser”. Last month, Rodriguez-Fraile sold it for $6.6m, one in the eye to everybody who sneered that he could have seen this clip online for free.

The key to understanding what Injective Protocol, Grimes, Trevor Jones, Beeple and Christies’s are up to are the initials NFT which, until last week, I thought stood for National Film Theatre. In fact, they stand for Non-Fungible Tokens, and are pronounced “nifty” by insiders. To call something fungible means it is replaceable by something else. If I offered the Louvre a tea towel of the Mona Lisa in exchange for the original, they’d show me to the gift shop. The original Mona Lisa is non-fungible. It is the unique bearer of its inherent value. Mona Lisa tea towels are all too fungible.

Rob Anders explains that, although digital art has been around since the 1960s and increasingly figures in major collections and biennales, it has always faced a problem: how to create non-fungible artefacts and thereby money. “Digital art,” he says, “has been dogged by questions of commercial value, authenticity, ownership and scarcity.” The hunt has been on to find means by which these works could be bearers of unique value. NFTs, says Anders, do just that.

How do NFTs work? To answer that we must consider basketball icon LeBron James and a cartoon cat with the body of a Pop-Tart. Last month, a single clip of the NBA star slam-dunking sold for $208,000. But why would a video clip that can be seen on Twitter or YouTube be worth a bean? The answer is because this single clip uses the blockchain technology that underpins such cryptocurrencies as bitcoin to authenticate its provenance. To put it more simply, this technology creates a digital item that can only ever be controlled by one person – enough to make it, in the eyes of collectors, the original.

The system was devised in 2008 by bitcoin’s inventor, known by the pseudonym Satoshi Nakamoto, who had the utopian aim of creating a currency free from control by banks. Data on all bitcoin transactions would be distributed via a database updated and shared across a network of computers, also known as a “blockchain”. It would be held, in theory, by every user in a “distributed ledger” that obviated the need for a central third party authority. In practice, sadly, bitcoin got taken over by what one economist called “charlatans and swindlers”, namely speculators with the most computer power, since that’s what it takes to create (or mine) new bitcoins.

The spillover of this technology to such items as video clips has created several improbable markets and entities. One is called NBA Top Shots, which has produced a valuable income stream for America’s National Basketball Association, selling NFTs of video clips featuring the starry likes of LeBron James and Maxi Kleber.

Mark Cuban, owner of the Dallas Mavericks, explained the appeal. “I get to enjoy knowing I own my Maxi Kleber dunk moment, along with knowing the serial number and much more. Some people might complain that I can get the same video on the internet anywhere any time and watch it. Well, guess what – I can get the [dunk] picture on the internet and print it out, and that doesn’t change the value of [the NFT]. And when I want to sell, NBA Top Shots offers a marketplace I can sell it in.”

But the only reason Cuban can sell his collectible Kleber clip is because whenever an NFT transaction is made, the data is timestamped and then has to be validated by the blockchain, which contains a history of each transaction. It’s like a digital signature, or a guarantee of its unique status. If you think all this sounds improbable, do you know anyone who would want to own the winning goal of the World Cup?

Consider, too, internet sensation Nyan Cat, an animated feline with a Pop-Tart for a torso that flies through space to a soundtrack of Japanese pop. Nyan currently has 185 million views on YouTube. An NFT of a gif of this mutant cat sold for $600,000 last month. And this month, Nashville rockers Kings of Leon released their new album, When You See Yourself, as NFTs. While the album is available through Spotify and other retailers, the NFT versions offers various extras, including digitally moving cover art and a vinyl version, all for $50. But here’s the twist. The NFT versions, launched last Friday, will only be made for two weeks, thus restricting supply and, you’d think, increasing their value. As result, these NFTs will become collectibles from which the band hopes to create revenue by getting a cut of sales and resales.

This new income stream is welcome for the likes of Kings of Leon given that, in the past 20 years, recorded music has been devalued. But hold on. Why would you buy the Kings of Leon album in either digital or vinyl format when, most likely, you can already hear it for free? Surely one of the fondest hopes of the digital revolution was that we didn’t need to own stuff any more? NFTs suggest another model of digital art, one in which the creatives get paid properly.

This boom raises lots of questions. Chief among them is this: what would Greta Thunberg think? Like bitcoin, NFTs are hardly carbon neutral. One artwork sold by Grimes, which had 303 editions, produced an estimated 70 tonnes of CO2 emissions as it was turned into an NFT. And then there is the hoariest of questions: what is art? It is striking that many of the NFTs being bought and sold for tens of thousands of dollars are gifs, memes or video clips of algorithmically created pixel-art characters. Rob Anders wonders if art generated by AI may become collectible and, if so, what that might mean for human artists. Maybe the likes of Beeple and Trevor Jones risk becoming obsolete, destroyed by the very innovations that are currently making them rich.

The speed this is happening at is discombobulating, says Anders, and there is a lot of speculation as to whether the NFT boom will be followed by a bust. He doesn’t have such doubts. “Remember what Lenin said, ‘There are decades where nothing happens; and there are weeks where decades happen.’ That describes very well where we’re at today. The scalability of the digital art market is colossal, particularly if digital art streaming takes off.”

Lenin was talking about the Russian Revolution. Perhaps we are witnessing the digital equivalent of the storming of the Winter Palace, with the old guard toppled by crypto-rebels fired up by dreams of how the art world could change for the better. Perhaps, too, we should remember how that revolution played out.